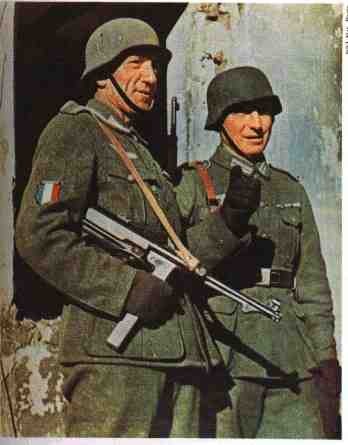 “We are perhaps more interested in Europe than other countries need to be” Adolf Hitler, speech at Nuremberg Rally, 1937

“The problem which must first be solved as the final abolition of the division of Europe into sovereign national states. Without this, any progress will be appearance only.” Altiero Spinelli – The Ventotene Manifesto, 1941

Chapter two of The Great Deception is as fascinating as any of the chapters in the book. Sometimes there have been attempts to link the current European Union with the Nazi ideas of a united Europe. This is understandable given that the Nazis spoke of a European economic community and a common currency, but it is fundamentally mistaken, because it does not recognise that the roots of the EU were long before the Nazis.

In 1942 Europe was more united than ever before. From the North Cape to southern Greece, from Brittany to 2000 miles to the Caucasus 2,000 miles in the East – there was political unity. The foreign minister Ribbentrop and the German economist wanted to set up a European Confederation but Hitler was opposed. More interesting was the proposal of Hitler’s finance minister, Walther Funk, who wanted to set up a Europaische Wirtschaftgemeinschafet (European Economic Community) with a single currency.

Goebbels saw the value of such pro-European propaganda. In June 1944 Vichy France’s

Secretary of State declared: “ We will help Germany on every front and in every way to preserve the West, its enlightenment, its culture, its traditions”.  50,000 non-Germans from every part of Europe fought on the Eastern front, under the Waffen SS, in the belief that they were serving the European ideal, rather than Germany.  This was not to be the last time that Euro- nationalism or populism was to rear its ugly head!

Other right-wingers were very keen on a united EU. Mussolini’s finance minister Alberto Di Stefani wrote: “nationalities do not form a sound basis for the planned new order…. There is only hope for peace by means of a process which on the one hand respects the inalienable, fundamental patrimony of every nation but, on the other, moderates and subordinates them to a continental policy… A European Union could not be subject to the variations of internal policy that are characteristic of liberal regimes”

The Norwegian Nazi Quisling: “we must create a Europe that does not squander its blood and strength in internecine conflict, but forms a compact unity. In this way it will become richer, stronger and more civilised, and will recover its old place in the world”

But whatever the dreams of some of the Nazi thinkers, the reality was that Hitler was opposed. After he came to power in 1933 his only interest in a united Europe was as an expression of German power and culture.

But the Second World War did have a tremendous impact on the eventual formation of the EU. In particular the idea of Euro-federalism was boosted. The idea that international peace could not be maintained as long as sovereign national states existed, became ever stronger. It was argued that federalism was the best way to prevent war. Ironically it was the Munich agreement of 1938 which inspired the setting up in Britain of the Federal Union – an organisation committed to a federal Europe – especially the unification of France and Great Britain into one political entity after the coming war. They gained over 100,000 members and had the support of Halifax and Chamberlain.

Maynard Keynes, the economist also argued for a federal Europe. After the fall of France in 1940 Monnet saw a great opportunity and convinced Charles de Gaulle that the plans for a Franco British union should be implemented immediately. The British were keen for this, but Renaud and Petain in the French and Vichy governments rejected it on the grounds that it would be enslaving France to Great Britain – and so the first great opportunity for some kind of federal Europe disappeared.

Proving as ever that in history it is the influence of individuals which counts, Salter was then appointed by Churchill to head a British mission to Washington. Whilst he was there he established friendships and influence, which meant that after the war the Americans were particularly keen on the notion of a European common market.

“prosperity and vital social progress will remain elusive until the nations of Europe form a federation of a ‘European entity” which will force them into a single economic unit… Our concern is a solution to the European problem. The British, the Americans, the Russians have worlds of their own into which they can temporarily retreat. France cannot opt out, for her very existence hinges on a solution to the European problem….”

The Italian Communist Founding Father of the EU

Whilst I don’t think it can feasibly be argued that the EU was a product of the Nazis, it is true that it was anti-fascism that provided the strongest driving force behind the idea of a united Europe – especially the Italian Communists. One of their main leaders, Altiero

Spinelli, left them and became a committed Euro-federalist.  He is now recognised as one of the founding fathers of the EU.  (later on before his death in 1986 he was to become a member of the European Commission for six years,  and a member of the European Parliament for ten years  The main building of the European Parliament in Brussels is named after him). He wrote Ventotene Manifesto – towards a Free and united Europe. This is an influential and important text in the European movement. He saw a United States of Europe with its own constitution and Armed Forces. What is particularly interesting is the means by which he wanted to achieve this.

“during the revolutionary crisis, this movement will have the task of organising and guiding progressive forces, using all the popular bodies which form spontaneously… Waiting to be guided. It derives its vision and certainty of what must be done from the knowledge that it represents the deepest needs of modern society and not from any previous recognition by popular will, as yet non-existent. In this way it issues the basic guidelines of the new order… By this dictatorship of the revolutionary party a new state will be for, and around the state new, genuine democracy will grow.”

The people were not to be involved in the construction of this new state. Popular assent would be sought only when the project was all but complete. This ‘playbook’ was the one that was used to found the EU. Its basic principles were anti- nationalist (therefore anti the national state) and anti-democratic.   National parliaments are in the Western liberal democratic tradition elected by the people. But Spinelli wanted a kind of benign dictatorship of the elite. His aims were good – social justice, individual well-being of the citizen, but the means for it to be achieved was not through democratic freedom, but from top-down imposition that could be given the fig leaf of democratic justification by later votes. This was, and remains, the main basis of the EU. A supranational (as opposed to inter-governmental) body, run by the elites, for the benefit of everybody.

Spinelli and his associates in various countries argued that their aim of social justice and so on could not be fulfilled “unless the different countries of the world agreed to go beyond the dogma of the absolute sovereignty of the state and unite in a single federal organisation.” Spinelli’s vision and ideals were to play a great part in the formation of the European Union – almost 40 years after he wrote them.

So we have now seen that the EU was not a Nazi or Fascist plot; nor was it a communist one.  But it was a federalist view which had as two of its founding principles – opposition to the national State, and opposition to democracy – the rule of the people.  It was…and is….a fundamentally elitist organisation (which is of course why the elites love it!!.

Part four next week – The failed post war attempts to set up the EU.