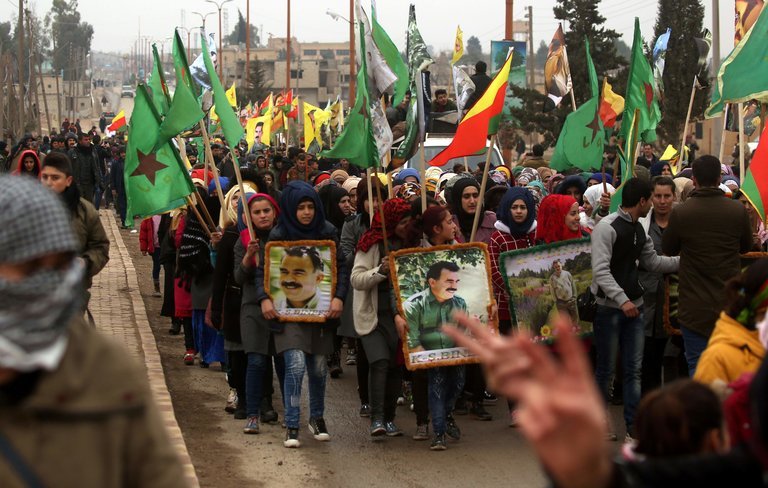 You have to feel sorry for the Kurds.  They were the primary ground troops in taking on Isis on behalf of the West, and now they have been abandoned by us as Turkey takes the opportunity to invade Syria in order to attack them. Turkey is a NATO member and yet, despite warnings, we will do nothing to help our erstwhile allies. It is something for which the West should be deeply ashamed – America, the EU and the UK. (see this New York Times report) And in the world of post-modern politics I wonder if anyone is as notice the irony of the name for Turkey’s operation in Syria – operation olive tree! The olive branch meant to be that of peace.   Speaking of twisting words –.the Jordan Peterson story took a new twist.

This was a fascinating article about Peterson – https://life.spectator.co.uk/2017/09/jordan-peterson-and-the-transgender-wars/ but after the Kathy Newman interview an interesting development took place. As is usual for social media there was some abuse – with millions watching the interview on YouTube that was not surprising.   However what did surprise was the way that Channel 4 turned this around to try and protect their presenter – not from the abuse, but from the damage to her reputation caused by the interview. So they turned to attack. Citing online abuse and ‘threats’ (although they were never able to show what they were) they called in a security ‘specialist’ (not the police who would have been involved if there were real threats) and issued a press release that got the required headlines. Kathy Newman was turned from a failed interviewer to a modern day brave heroine fighting for feminism! She was able to claim victim status and a member of the oppressed class, even though she is very much part of the privileged elite (educated at an exclusive private school and Oxford, on a millionaires salary and a powerful voice in the media).   This is how modern discourse is conducted. Forget the arguments – just demonise your opponent, virtue signal and claim victim status. Who knows what Kathy would have made of our next story?

Is Jordan Peterson the New Messiah?

This is one of those ‘so ridiculous it can’t be true’ stories. But it is.   The story is that Oxford University have increased exam times in order to help improve the results of women.   Of course there could be a case for changing the length of time because it is too time pressured – but to do it for one sex in todays age is bizarre. Dons ruled that” “female candidates might be more likely to be adversely affected by time pressure”. And I thought we were supposed to be equal and that gender was just a social construct!

Scientists now say that adolescence, which used to be 14 to 19, is now 10-24.   Longer education, children staying at home longer and delayed marriage are considered to be causes in the extension to the upper age limit (biological factors for the lower). Although personally I think that computer games, bad parenting and the dumbing down of society may also have something to do with the infantilisation of society.

It appears we have yet another moral panic on our hands. The Presidents Club, a men’s only fund raising event is now to be disbanded because of claims of ‘groping’ at a fund raising dinner they held for men – in which 150 young attractive women were recruited to act as hostesses. Personally I think it is the kind of event that I wouldn’t want to be seen dead at – and regard it as degrading and demeaning. But when you get politicians screaming ‘this is unacceptable in modern society’, the hypocrisy really sticks in my throat. If they really wanted to be consistent about this then they would target Internet pornography, all sex clubs, much advertising, most gay clubs and the entire what is euphemistically called ‘sex industry’.   Women being paid so that men can exploit them (and the other way round) is nothing new. If only our new moralism had some backbone and reason to it – rather than just media hysteria and political irrationality.

I don’t know whether this makes me more angry or sad!   I’m angry that Copeland can exploit gullible Christians and use the Gospel as a means to further his own wealth.   Even more so that he shamelessly boasts about it and so misuses Scripture in such a way – (the use of the verse at the end of the video above is one of the worst misquotes of Scripture I have ever come across!).   But I think I’m even more sorrowful that people fall for this charlatan and accept his false ‘health and wealth gospel. In case you think that is too strong – have a look at this –

But lets not leave it there…

7) Growth of the Church in Spain –

It’s good to report encouraging news from Spain.  Our friends from Evangelical Focus have sent this report from the Spanish Justice Ministry which shows that the number of evangelical churches in Spain has grown by 87 last year to its highest ever number, 4.045. That is six new churches being planted every month in Spain. May they be protected from the false teaching of the Health/Wealth perverters of the Gospel, and the discrimination of the militant atheists

Quote of the Week: (for Steve Chalke!)

Reverend North reportedly preached on Jesus’ teachings about His Second Coming and the story of the wicked servant at the end of the 24th chapter of the gospel of Matthew.

“I know Jesus said some pretty tough things in this passage here,” North began gently. “I just want to start out by saying I’m so sorry for the unfortunate choice of words used in these passages of Scripture. Things like ‘flood,’ ‘wicked,’ ‘cut him into pieces,’ and ‘weeping and gnashing of teeth’ have no place in civilized society.”

North then continued to apologize profusely to his congregation for the “harsh language” used by the Savior throughout the text for the next twenty minutes.

“Just to wrap things up here,” North said as he finished up his sermon in which he’d done nothing but say he was sorry for what the Bible said, “I just want to reiterate to you how deeply sorry I am that you had to hear all that.