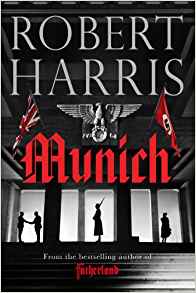 Robert Harris is quite simply a brilliant writer. He combines the ability to tell a good yarn with fine writing and an eye for historical detail. I first read his Cicero trilogy – (which I will review later) – but it is his latest book, Munich that we look at here.   (Published by Penguin – 2017).

This is a novel woven round the story of the infamous Munich agreement in 1938. This is usually spoken of with contempt as an example of the weakness of appeasement.   Harris, as is his wont, tells the story though superb characterization and exquisite historical detail.   He uses the literary device of two young men who had been friends – coming into contact with one another again at the Munich conference. Hugh Legat is one of Chamberlain’s private secretaries and Paul Hartmann is a German diplomat and a member of the anti-Hitler resistance.

Although we know what happens at the end (if you know your history!) this is still a novel full of excitement and suspense. As The Times says “Harris is the Master of the intelligent thriller”. The Observer calls him “The Master of pace and entertainment”. I wholeheartedly agree. This is a brilliant book. One of those I could read straight through at one go – such is the entrainment and interest value.

What impressed me more than anything was that Harris achieves the almost impossible.   He vindicates Chamberlain.   Or at least he puts a very strong case that if the Munich peace agreement had not been signed then the Second World War could easily have been lost.   Britain needed the extra year to re-arm. Hitler certainly thought that the Munich Agreement ended up being worse for him.

As usual with Harris there are good character insights – but it is the political and historical that are the most impressive. Take these two examples.

“They weren’t such bad fellows, Hartmann thought. He had mixed with their type all his life: patriotic, conservative, clannish. For them, Hitler was like some crude gamekeeper who had mysteriously contrived to take over the running of their family estates: once installed, he had proved an unexpected success, and they had consented to tolerate his occasional bad manners and lapses into violence in return for a quiet life” (p.102)

I suspect I am not the only one to see allusions to Donald Trump, and other right wing populists who manage to take over a more traditional conservative party (although please note – this is not comparing Trump and Hitler).

“The communique made it seem as if the whole thing had been Hitler’s idea. And people would believe it, thought Hartmann, because people believed what they wanted to believe – that was Goebbels great insight. They no longer had any need to bother themselves with inconvenient truths. He had given them an excuse not to think.” (p.139).

I would suggest that much of Western democracy (and indeed other countries in the rest of the world – whether democratic or not) has been blighted by this Goebelle’s ‘insight’.   In the age of 24 hour news, social media and the internet it is surely the case that people who don’t want to be bothered with inconvenient truths can easily settle into their own echo chamber, hear what they want to hear and have an excuse not to think. It is surely the job of the Christian church to challenge that culture and speak truth – even to those who do not want to hear. He who has ears let him hear.

Two other Harris books set around the same period are also worth mentioning.

Fatherland – was Harris’s first novel (1992). In it Harris imagines a Germany which has won the Second World War and created a German Super State in Europe with Berlin being the capital as envisaged by Hitler’s architect, Albert Speer.   It is a brilliant novel, full of historical detail, which somewhat depressingly makes one realise how history could have been.

Some quotes from Fatherland

“Religion was officially discouraged in Germany. “

“ A police state is a country run by criminals”.

“ In the West, twelve nations – Portugal, Spain, France, Ireland, Great Britain, Belgium, Holland, Italy, Denmark, Norway, Sweden and Finland – had been corralled by Germany, under The Treaty of Rome, into a European trading bloc. German was the official second language in all schools. People drove German cars, listened to German radios, watched German televisions, worked in German owned factories, moaned about the behaviour of German tourists in German-dominated holiday resorts, while German teams won every international sporting competition except cricket, which only the English played.” (p.196).

Enigma (1995) like Munich deals with a real historical event – the cracking of the German U-Boat cipher code – by the British (not the Americans as in the Hollywood movie!). Again a page turning, informative, fascinating, well-written historical novel.