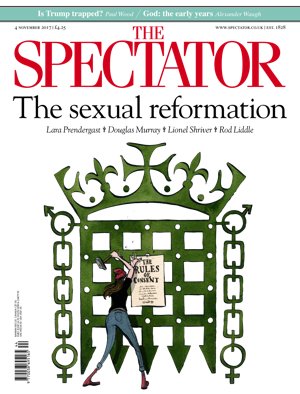 One of the traps we fall into as Christians responding to the chaos in today’s culture is that sometimes we do not see the wood for the trees.  So we end up responding to particular issues without realising the context in which those issues arise.  It is absolutely essential that we get the bigger picture – the helicopter view.  In the following article I attempt to do that – and in a way that ordinary Christians can grasp without having to get a PhD in sociology or theology!  I hope it helps….

Welcome to the Sexual Counter Reformation

Once upon a time human beings lived in ignorance and bliss. They knew they were sexual beings and had sex with whomever, whenever and however they wanted. At the time of the Greeks, Romans and Pagans, everyone lived in sexual freedom and harmony. And then along came the Christians – especially St Paul and St Augustine – and spoiled the whole party. They turned sex into guilt and repression and for the past 1500-plus years the Western world has largely lived under this cloud of Catholic/Calvinist/Christian oppression.

But never fear. A new dawn was coming. Up stepped the apostles of the New Enlightenment: Darwin, Marx and Freud; followed by their disciples such as Margaret Mead (The Coming of Age in Samoa); the Bloomsbury Set, Kinsey, Ingmar Bergman and Hugh Hefner, among others. The seeds of the new sexual revolution were sown, seeds that would only come to fruition in the 1960’s sexual reformation.

Easier divorce, the invention of the contraceptive pill, acceptance of sex outside normal conventional marriage, the industrialisation of pornography, the legalisation of abortion, the freedom offered by drugs, some elements of the feminist movement, and the development of Queer theory were all contributing factors in this glorious liberation. By the Summer of Love in 1967 we were all able to share free love, sexual liberation and freedom from the sexual and social repression of our Puritan/Catholic past. We were progressing into sexual nirvana.

Or so the story was supposed to run. But 60 years on the seed that was sown in the 1960’s sexual reformation has borne a very different fruit. Sexually Transmitted Diseases are at

an epidemic level, abortions now run at millions every year; one in three marriages end in divorce; millions of children are not being brought up with both their parents; child pornography and abuse is on the increase; hard core pornography has become the norm on the internet; the streets have not become safer for women; and slavery (in the form of sex slave trading) has returned to the West. Broken homes, dysfunctional families, increased loneliness, gender confusion and the sheer utter lovelessness of it all.

And so we have come on to a crisis point. Some think it is a turning point. The Spectator last week was headlined ‘The Sexual Reformation’ and carried articles wondering if the backlash against the failed fruit of this reformation was now leading to a Sexual Counter-Reformation. It was pointed out that sexual freedom has led to sexual fear and now there is a new secular puritanism coming to the fore. Every word is to be scrutinized, safe spaces established, ‘women-only’ carriages on trains’ etc. In an era that is obsessed with sex (was it ever different?) and where we have such sexual freedom, the irony is that many are concluding it’s better not to have sex at all. We live in an era when Fifty Shades of Grey is feted as feminist erotica, even though it glorifies male dominance and violence, while a man putting his hand on a woman’s knee is an evil sign of the patriarchy. Our answer to misogyny (hatred of women) is apparently misandry (hate men). Put those two together and you end up with misanthropy (hatred of human beings). In the age of humanism we are heading towards a society that likes the idea of humanity, it’s just humans it can’t stand.

There are some Christians who think that this backlash is a good thing and that it might herald better days ahead. I’m not convinced. I think that we live in a confused, hurting and increasingly irrational culture, where the gods of money, power and sex still reign. I don’t believe that a return to a perceived golden age of Victorian morality is either possible or desirable. What we really need is to go back even further – to the 1st century Greco-Roman Pagan world.

Back to the Future

In a sense we are already there. Unlike the myth sold us by the false apostles of the new sexual revolution, this was not a time of sexual bliss but one of confusion, abuse, slavery, sexual diseases, infanticide and abortion, immorality, and the rich and powerful ruling over and using the poor and weak. In other words instead of our society progressing we have regressed to the Greco/Roman/Pagan past. We have gone back to the future.

So it’s simple. The Church should do in the 21st century, what it did in the 1st. Preach the Gospel, care for the poor, avoid all sexual immorality, live in a community of love and fellowship and keep ourselves from being tainted by the world. The Church failed many times (look at the Corinthian church for a start). But that is where we have such an advantage. Ours is not a gospel of law (do this and you will live) but a gospel of grace and forgivingness (this has been done for you – now go and live!). Nothing our secular sexual revolutionaries or counter- revolutionaries can offer comes anywhere near this. They can only offer a false freedom that leads to slavery or a moralism that leads to condemnation. We can offer forgiveness that leads to eternal life. A new beginning. A new birth. God knows but our society needs to hear and see that right now.

As James 1:7 says: ‘Religion that God our Father accepts as pure and faultless is this: to look after orphans and widows in their distress and to keep oneself from being polluted by the world.