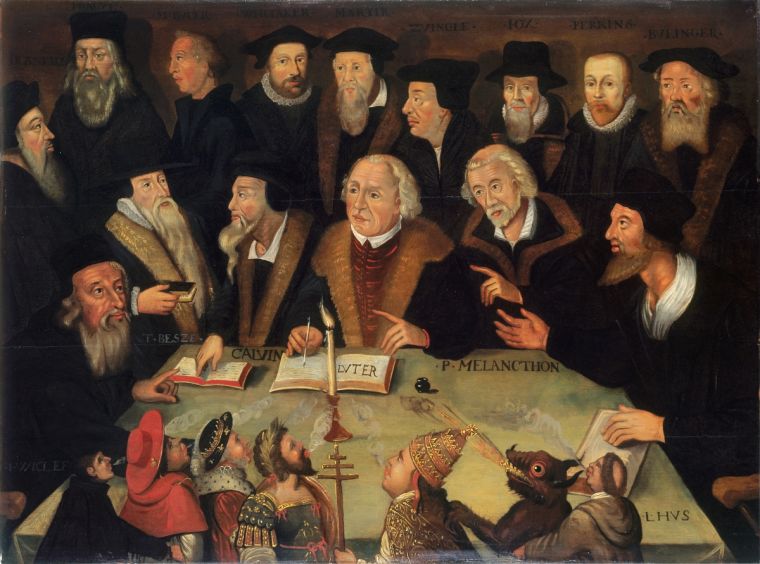 Continuing the Reformation theme – my latest article in Christian Today   (please click the link for the original) – asks whether we should celebrate the 500th anniversary…I will also be on the Janet Parshall tomorrow looking at the same question from an American perspective….In this article look particularly at the BBC documentary which sought to portray the Reformation as some kind of Jihad…!

Reformation 500: With the ‘fundamentalism, terror and religious violence’ should we really celebrate?

An awful lot of Protestants seem to be somewhat embarrassed by the Reformation. Many more are not really sure what it is. Some seem to regard it as the true Pentecost, the real beginning of the Church – a kind of reboot Church 2.0. What should we make of it?

As yours truly will be heading to Wittenberg next week to speak at the 500th anniversary celebrations organised by the World Reformed Fellowship, you will be able to work out that I regard this as a significant anniversary – well worth remembering and learning from. The list of speakers from many different denominations all over the world indicates the success of the Reformed churches who are now to be found all over the world. Dutch, American, English, German, Brazilian, Indonesian church leaders are among the speakers…and of course one Scotsman! Brazil and South Korea are two examples of non-European countries that now have large Reformed communities.

Martin Luther in the Circle of Reformers, 1625/1650© Deutsches Historisches Museum

Meanwhile some of our Roman Catholic brothers and sisters are attempting to heal the breach – suggesting that the Reformation was an unfortunate, if understandable blip in the history of the universal Church.

But what does our secular culture made of it? The BBC had a recent documentary entitled Reformation: Europe’s Holy War presented and narrated by the historian David Starkey.

It was a fascinating programme and gave an insight into how some perceive this notable anniversary. The programme itself was well produced and presented, and had some good history and interesting facts but the overall impression is well summed up in the advertising for it: ‘David Starkey tells the story of the Protestant Reformation and how it transformed the face of modern Europe, unleashing fundamentalism, terror and religious violence.’

The Reformation as Jihad?

The Reformation as Jihad which unleashed 200 years of bloodshed in the name of God? Is this a credible and legitimate interpretation of the facts or is it reading back into history what we want to see from today’s zeitgeist? The narrative is that Christianity used to be violent and oppressive, had its Reformation, then Counter Reformation and then thanks to the Enlightenment, the Protestant churches became the nice cuddly, cute and culturally ineffective organisations we see today. Lesson for today? If only Islam could have its own Reformation, (preferably without the bloodshed), then we would all be able to progress forward to our secular Nirvana.

It is at best a simplistic view of history and at worst a distortion that fails to take account of some of the key issues – most notably the spiritual ones of how we get to heaven, what the church is, and how we know what God is saying. Secular historians tend to work on the narrative that because these issues are not important to them, then they could not have been really important to others. But what about the Church?

What should we make of the Reformation? Should we celebrate it?

It was after all a spiritual as well as a political and cultural revolution that was foundational in the making of modern Europe (and America). My view is that we should certainly learn about it, and yes celebrate the good, whilst acknowledging the bad. But we need to be as careful of our own preconceptions and biases as we expect others to be of theirs. Carl Trueman, the Professor of Historical Theology and Church History at Westminster Seminary in Philadelphia, has an important warning for us all:

‘But when all you see in the past is your own reflection, you cannot really learn very much from it. The 500th anniversary will have been a wasted opportunity for real theological and ecclesiastical reflection if it becomes merely an exercise in semi-fictional hagiography in the service of self-affirmation.’

If we can avoid the hagiography, cynicism and point scoring, then remembering the Reformation could turn out to be a key element for the whole Church today – as we seek renewal, revival and yes, a new Reformation.