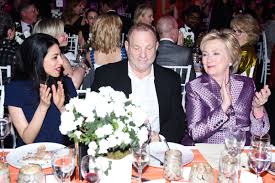 My biggest problem with this weeks Light Engaging Darkness is what to leave out….there is so much going on…..but I hope the following selection is helpful to you….
Lets begin with the biggest story of the week (at least on the BBC where five days in a row it was the headline story.

The fall of the Hollywood producer Harvey Weinstein is notable, nor for the salacious details, nor for delicious delight and Schadenfreude of his ex-media colleagues, but rather for the sheer hypocrisy of a culture which excused, laughed at and created Weinstein.

Meanwhile Hilary Clinton had her say.  The irony of Bill Clinton’s wife complaining about a man who used his power to gain sexual favours from young interns seems to have been lost on her.  Even more astonishing than the fact that Weinstein is the epitome of the Hollywood elite – a major funder and supporter of the Democratic party and Hilary Clinton – was the fact that he funded and paid for a march against Donald Trumps comments on women!  It’s the definition of hypocrisy.
But to me it is most amazing that people cannot see the wood for the trees.  If you create a culture which celebrates sexual promiscuity and worships the unholy Trinity of sex, money and power, what do you expect will happen? Babylon Bee hit the nail on the head –  “Morally Bankrupt Entertainment Industry Totally Baffled As To How Culture Became Morally Bankrupt”
The lack of intelligent understanding was exemplified by the ‘expert’ I heard on BBC Radio 4 managing to link Weinstein, Trump and Brexit!   Speaking of the latter –

2) An EU President Called Juncker went into a Bar…

Juncker told a group of students why he thought Britain should have to pay lots of money to the EU.  If you are in a bar with 28 other people and you have to buy a round, you 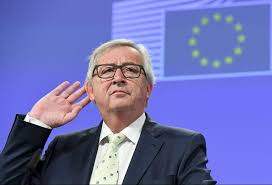 don’t just walk away.   , This was not the best of analogies.  Not just because Mr Juncker is reputed to have a noted drink problem…but mainly because it is illogical.   To follow the analogy, the UK has been paying for other peoples drinks for a long time.  Deciding to leave the party because you are fed up paying for others, and because you would like to home and have a little bit more control of your own life, does not mean that you have to keep paying for those who wish to stay on and get drunk!  It’s a daft analogy but despite that there are those who are so infatuated with the EU that they regard everything said by its officials as brilliant (aka Ken Clarke, Alaister Campbell, Nick Clegg and every SNP politician who comments on the subject).  I heard Ken Clarke this morning talk about Juncker as someone to be admired and trusted – this about a man who said that ‘when it gets serious, you have to lie’!
Meanwhile if you doubted where the power lies in this EU ‘democracy’ consider this from Mr Juncker – “If we allow Catalonia to separate, others will do the same”.

British for Brexit and talks about justice etc.   The only problem is that he too is a hypocrite.  He beat his lover to death (a mother of four children) a crime for which he served a total of three years in prison.   When he got out his wife who had stuck by him, killed herself after six months, citing psychological and physical abuse….and yet the man is lauded.   This quote from The Spectator Article  sums up the moral bankruptcy of the culture.

‘The problem with Bertrand Cantat is that he has this air of someone who wants to forget his responsibilities’, said François Cluzet, the husband of Trintignant, in 2011. ‘He has paid his debt to society…but it’s really galling to see that that guy is going to be applauded once more. Whether you like it or not, he’s still a killer’.

Those words have a particular resonance this week, not just because Cantat is plastered all over Les Inrockuptibles, an iconic left-wing cultural magazine, but because as the Harvey Weinstein scandal reveals, the world of the arts has a strange set of values.

The Metropolitan police in London are being issued with instructions not to investigate low-level shop lifting or burglary’s without violence…in order to save £400 million.    My advice to anyone who is burgled – claim it was a homophobic hate crime and you will get police attention.

As if the hard pressed NHS staff did not have enough to do, now NHS England are instructing doctors and all front line professionals to ask the sexual orientation of every patient they see.   This is apparently to keep in line with the Equalities Act – which is of course complete rubbish.  Why just sexuality?  Why not ask every patient about their income?  Their religion?  Their political views?  Imagine a 15-year-old girl going to the doctor with acne and being asked about her sexual orientation?   Or my mother going with flu and being asked the same question!  Its nothing to do with healthcare and everything to do with the tick box culture of the oh so caring elites.

NHS England recommends health professionals – such as GPs and nurses – ask about a person’s sexual orientation at “every face to face contact with the patient, where no record of this data already exists”.
But the Family Doctor Association said it was “potentially intrusive and offensive” for GPs to monitor people’s sexuality.Chairman Dr Peter Swinyard told the BBC that for older patients in particular, sexuality “doesn’t affect health outcomes or care”.He said that GPs tend to know patients’ sexuality, or would ask, if it was relevant to their medical condition.
For example, patients at a sexual health clinic are likely to be asked, but not those attending a wart clinic.He added: “Given the precious short amount of time a GP has with a patient, sexuality is not relevant.”He said there were “relatively few medical conditions” that it affected.

This year is the 50th anniversary of the 1967 abortion act – one of the most infamous and evil pieces of legislation ever passed by the British parliament.  This was a brilliant programme The Moral Maze on abortion….the two witnesses against were very impressive.

I thought that Ed Condon, the Catholic moral witness was superb….

Another Catholic who has consistently spoken up for the child in the womb is Ann Widdecombe.

But there are problems in the Catholic Church too.  The Tablet, the international inhouse magazine of the Catholic church in its editorial argued that Catholic teaching sets the bar too high.  I don’t want to interfere with a family squabble, but the Catholic church has been a stalwart on this issue and it is deeply troubling when an official publication begins to argue against the church’s own teaching.

7) The Globalisation and Goebbelisation of Thomas the Tank Engine

Thomas the Tank Engine is to revamped so that it can be more politically correct.  There will now be three female engines and four male (why not a transgender engine?).  The Fat Controller will be slimmer and nicer….and Ringo Starr has gone!  As the Scotsman reported –

“In its evolution the cartoon will tackle and teach kids about quality education, gender equality, sustainable cities and communities, responsible consumption and production, and life on land.”

This week I saw some primary school children taking part in a Scottish Parliament committee.  The questions and answers they all gave were of course spot on…and just want the parliamentarians wanted to hear.  But this is not the voice of the children speaking – this was the voice of the teachers.  As one MSP said ‘your teachers have taught you well’.  Indeed they had.  The indoctrination continues.  We have rapidly moved towards a stage where children are being taught what to think, rather than educated in how to think for themselves.

8) The Battle for Free Speech

This is an absolute must listen to….IF you do nothing else with this LED – listen to this and pass it on…brilliant analysis how the kind of brainwashing and indoctrination described above eventually leads to brainless students shouting that science and reason are useless (all done in the name of science and reason)….

And finally Juan Mata, the Manchester United football star was being widely praised for suggesting that his fellow professional footballers should give 1% of their income to

charity.  This was being lauded as extraordinary generosity (in the full light of the cameras).  Mr Mata earns £140,000 PER WEEK…so losing £1,400 is hardly going to cost him anything.   Meanwhile in the church we encourage all our people to give at least 10% if not more…so that together we can help the poor and spread the gospel – without having our names up in lights.  The pensioner who gives £5 per week is in my view giving far more than the football millionaire giving £1,500.    There is an equality in Christianity, which our world can never know.  It talks about equality and yet the whole culture is based on inequality.   (I will put up the sermon I preached on this last night later on in the week).
All that….and we didn’t have space for the Kurds, Jeff Sessions, or To Kill A Mockingbird….!  Perhaps next week?
Led 12 – The Scottish Episcopal Church – Archbishop Welby – Peter Hitchens Category Error – The Denver Statement – Wilton Park and Government Religion – Christy Wimber – Tom Petty