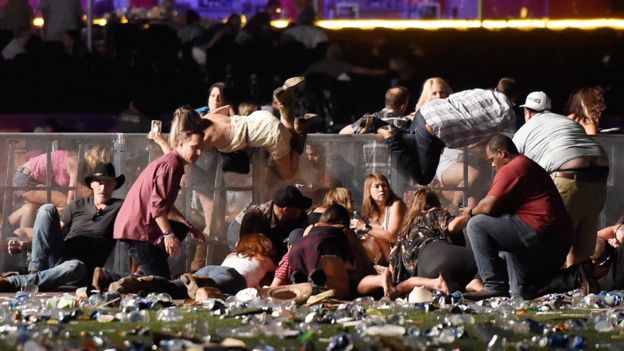 As I write America is waking up to the horror of yet another mass killing by a gunman. A 64-year-old Nevada man, Stephen Paddock, killed at least 58 people attending a country music concert in Las Vegas.  Unfortunately there were those who were quick to make judgments and pronouncements. ISIS claimed that Mr. Paddock was one of theirs, having converted to Islam a few years ago, but the police have so far found no evidence of this.

Piers Morgan – never one to take his time and wait until he actually has information tweeted “If the shooter was Muslim, we’d call this a terrorist attack. This was a terrorist attack, committed by a 64-year-old white American.”   Piers is one of the most infuriating commentators around – mainly because he just shoots off his mouth and pontificates without thinking about what is involved. But what bothers me more is that Piers knew nothing about this and yet felt free to immediately make a political (and racist) point. Just because someone is white and elderly does not mean they could not be a Muslim. Just because a gunman is a Muslim does not mean that they necessarily killed in the name of Islam.   And just because violence occurs does not mean that it is terrorism. Terrorism is associated with a political, religious or ideological cause. Such extreme violence is often associated with mental illness or just plain evil. Often the cause can be a complex mixture.   This was, as President Trump rightly pointed out, ‘an act of pure evil’.

We will find out more in terms of the causes as time goes on. Until then Piers Morgan and others like him should avoid the politics, virtue signalling and blame game.   And please can someone ask and answer the question why Nevada gun laws allow people to own automatic weapons and unlimited supplies of ammunition?

Meanwhile even before this attack there was another attack in Europe which seems to have gone almost unreported.   Two young French women were stabbed to death by a man shouting ‘Allah Akbar’.   These ‘lone wolf’ Islamist attacks have become so common that they are almost not reported on at all.

As we reported in last weeks LED, Catalonia tried to hold an Independence Referendum this weekend. 90% of the 44% of people who voted apparently voted for independence, but the story was really the violence from the Spanish police and the reactions against. When the Catalan government claim 700 plus injured you need to remember that they include in this ‘anxiety attacks’. Nonetheless the scenes are shocking.

I find it interesting that lots of Scottish Nationalist politicians have been expressing their support for Catalonian independence and several have been there this weekend. That is understandable, but what is not quite so clear is how they square the circle of their support for Catalonia with their devotion to the EU (which in their eyes can do no wrong). The EU Commission has declared the Catalonian vote illegal and said that it is an internal matter for the Spanish government to deal with. It was also made clear that an independent Catalonia would not be welcome in the EU. The Irish government also said that they did not support the Catalonian vote.   I wonder what the Scottish government will do? Will they express support for a Catalan Independence movement that is opposed by the EU – an EU which the Scottish Government wants us to join and be subject to.

Last Word, the BBC’s obituary programme is fascinating. Especially this week – including

Hugh Hefner, Stanislav Petrov (the Russian who stopped nuclear war) and Sir Teddy Taylor. You can hear the part about Teddy Taylor from the 14:30 minute.   I always found him a fascinating character. I don’t know his religious views but he was always consistent and was what Ruth Davidson rightly called ‘a tenement Tory’ – a working class Tory MP who cared for his constituents and was respected by many – even those who disagreed with him.   Scotland and the UK are poorer when we lose politicians like him.

Many is the time I have listened to Runrig albums, attended their concerts and on one occasion even interviewed Calum MacDonald for Moray Firth Radio!   They were and continue to be one of Scotland’s best ever bands. I remember the story I was told by Calum, I think in that interview, of how they didn’t fit the stereotype of the normal rockband…on one occasion they were on tour in Germany and they had to ask people in the hotel to be quiet because a rock band were trying to get to sleep!

Runrig have just announced their farewell gig in Stirling next year. Tickets went on sale at 10am on the 29th of September but within minutes all 25,000 at £49 tickets had sold out, leaving many fans disappointed. Except all 25,000 tickets had not sold out. Many of them had been passed on to Ticketmaster subsidiary GetMeIn who were charging between £246 and £275 per ticket.   It reminded me of a time when I queued outside the Caird hall to get tickets for Mumford and sons. We were about 100th in the queue – given that tickets were limited to 4 per person and the Caird hall holds around 2,000 – we thought we were safe. But after an hour of waiting we were told that they were sold out. Within minutes the tickets were on sale at seven times the cover price – not from touts but from companies who had purchased many of them. It’s a scam. And its legal. And it’s shameful. Can the bands not insist that tickets are only sold to fans, not to companies, and that resale is prevented?

According to this report dozens of transgender teenagers are freezing their sperm or preserving their eggs on the NHS so that they can have babies after changing sex. Adolescent boys – some as young as 12 – who believe they are female are having their sperm frozen before receiving powerful hormone treatment that halts the onset of puberty and shuts down their reproductive system

NHS clinics are also freezing the eggs of girls from the age of 16 before they begin taking male hormones that will reduce fertility. These eggs can then be used at a later date so they too can have their own babies.

The current cost of providing fertility treatment to transgender teenagers on the NHS is believed to run into hundreds of thousands of pounds. But this bill is expected to rise as more young people say they have been born the wrong sex.

As someone who is well acquainted with the NHS, I know the desperate shortages there are in terms of equipment and staff. We cannot afford cancer treatments, but we can afford lifestyle drugs and treatment like this?

This article from Private Eye almost needs no comment.  This is the confusion

‘The concept for this exhibition was born when I began visiting galleries, ‘art critic Jessica Dawson told a press conference in Brookfield Place, Lower Manhattan, ‘accompanied by my rescue dog Rocky. It was clear that Rocky saw art differently than humans, he wanted to engage directly with the work and I realised he had something to teach humans about contemporary art. Here is the result: dOUGUMENTA, the world’s first art show specifically designed to appeal to canines.

Our exhibition takes its name from Document, the contemporary art survey that takes place every five years in Kassel.   Unlike most exhibitions, dogs are invited to climb onto each piece and interact with the works in whatever way they desire, whether that means eating, drinking or even peeing on the art. When Rocky first saw the Carl Andre exhibit for example, he just went and sat on it vibrating with pleasure. He doesn’t have the inhibitions we do. I admire the way he went straight up to the work, his fearlessness. We can all learn about looking from Rocky, learn that art and life are one. I recall Proust, who said ‘the real voyage of discovery consists not of seeking new landscapes, but in having new eyes. ‘Thanks to Rocky, I am seeing art through new eyes.’ (Art Forum).

7) Lidol apologises for erasing crosses from its food packaging.

Another extraordinary story. The supermarket store Lidl managed to produce food packaging for some of its Greek products which showed a Greek Orthodox Church, with the cross on the top removed. Why this kind of airbrushing? As Andrew Brown in The Guardian pointed out –

“Much more likely is that this is simply an act of bureaucratic incompetence and lack of cultural sensitivity, but in this case the culture to which Lidl is being insensitive is actually their own.”

This is a great story – from the BBC

I hope this works out.  What an encouraging use of international co-operation and technology…from a Christian perspective this is what we should be doing as stewards of the earth.

Hopefully see you next week….

Finally Quote of the Week:

Martin Luther – “ in domestic affairs, I defer to Katie. Otherwise I am led by the Holy Ghost.”