Good old Tim Keller has been up to his tricks again – preaching the gospel, engaging the culture, applying the Bible, growing the church.  So time for a wee take down – lest he get too big for his boots….time for the reformed world twitterati to do the Holy Spirit’s job and convict Tim of sin, righteousness and the judgement to come (and not to have ballet in church!).    What has Tim been up to?  This is the tweet that was doing the rounds –

The Church needs artists because without art we cannot reach the world.

In this article rather than look at the issues that Keller actually raises, worthy as they are, I  want to examine what some of the reactions tell us about the Reformed world, the Internet and Social Media.

Let’s look first of all at what Tim said.

The Church needs artists because without art we cannot reach the world. The simple fact is that the imagination ‘gets you,’ even when your reason is completely against the idea of God. ‘Imagination communicates,’ as Arthur Danto says, ‘indefinable but inescapable truth.’ Those who read a book or listen to music expose themselves to that inescapable truth. There is a sort of schizophrenia that occurs if you are listening to Bach and you hear the glory of God and yet your mind says there is no God and there is no meaning. You are committed to believing nothing means anything and yet the music comes in and takes you over with your imagination. When you listen to great music, you can’t believe life is meaningless. Your heart knows what your mind is denying. We need Christian artists because we are never going to reach the world without great Christian art to go with great Christian talk.”

This raises all kinds of questions.   What is art?  What is the gospel?  How do we communicate the Gospel?  Is art necessary and essential in communicating the Gospel?

If only people had stuck to discussing these questions!  We could have discussed the place of ballet (for me not in worship but why not in evangelism? ) We could have seen

how Hans Rookmaakers Modern Art and the Death of a Culture is still a vital work in understanding where our culture is.  We could have followed Bill Edgar’s line of thought in his superb new book  Created and Creating;  but no, the heresy hunters were in full swing – bravely battling the forces of darkness from their keyboards.

Some meant well. I’m not going to name and shame because I came across lots of comments like these below and there is no need to necessarily personalise things – there will however be one exception below!)  They were horrified at the idea that Keller seemed to be suggesting that the Gospel wasn’t enough.  “The Church needs artists because without art we cannot reach the world. ” Tim Keller. Poor Jesus & Apostles — if only they’d known. “.  The trouble with such sarcastic witticism is that it is neither witty nor true.  To accuse Keller who has spent his lifetime devoted to proclaiming Jesus and the apostles of claiming to know better than them is to say the least ‘uncharitable’.    This is not some liberal denying the Scripture.  This is a Christian brother whose ministry has been greatly used by God.  He is part of the body of Christ and to give him a kicking based on at best a misunderstanding of what he said is not the way to go.   The prophets of Baal deserve a kicking, Barnabas doesn’t.

I read other comments from what I would call friendly fire – my favourite was ‘let him try that in North Korea’.  I assume the writer was suggesting that the only way to communicate the Gospel is by the preached word and that using art in North Korea would result in them being in trouble.  That illustration actually works against the point being made.  Go and stand on the streets in North Korea shouting verses from the Bible and see how long you last!  On the other hand art may be a way to get behind the wall.

I think a lot of the comments were unwise and a result of the curse of social media- that people like me are especially prone to fall for.  The need to comment on something instantly – without proper reflection and without thinking of the consequences and who and what we may be harming.  Also many on this side of the pond don’t understand the context in which the comments are made – and context is vital.  The bottom line is that there are some Christians in the US and in this country who are either out to get Keller or to get a name for themselves by being seen as the anti-Keller.

The trouble is that whilst there are those who have genuine concerns about some of the things Tim Keller says – (how sad it is to have to put a caveat that just because I am speaking up for him doesn’t mean I agree with everything he says nor that I really care because he’s not that important and neither are his critics!); there are others who are seeking an identity/ministry/blog/hits/infamy for themselves.   They are just looking for an opportunity to stick the boot in and so when Redeemer have dancing on the stage and Keller then defends it with a statement, that taken out of context, can be used to hammer, the nails come out!

And none more so that our old friends PulpitandPen – who can hardly wait before they flex their internet ready fingers and start their latest battle.   In the interests of due disclosure I have to admit to having been the victim of their machinations before – in one of my favourite reviews of Magnificent Obsession I got the impression that they were not over enamoured with it – nor me!

David Robertson is a pope-promoting wolf in Reformed sheep’s clothing that has crept deceptively into the midst of Reformed circles to devour the sheep……To be clear, there are some real kernels of truth in Robertson’s book, but you’d have to possess the palate of an undiscerning pig to want to eat them. Discerning sheep have no appetite for cow patty-contaminated kernels of truth, and walk right on by. Discerning and loving shepherds refuse to serve pig slop to the Lord’s sheep, instead, they lead them to green lush pastures of uncontaminated biblical truth.

Their review of Keller was the usual gleeful, illogical, unbiblical schadenfreude.

“Keller doesn’t trust God. He relies on human power and art to proclaim the Gospel rather than the Holy Spirit.   Only the Gospel has the power to save.”

The trouble with this is that it is straight out lying.   Keller does trust God.  He knows that nothing he nor his church says or does will ever convert anyone and that only the Gospel has the power to save.  To promote him as saying that the power of God is not enough is to lie. To encourage those who do so is to encourage liars and to further the cause of the Father of lies – straight from the pit of hell.

They actually sound like the liberals they profess to despise who quote the words that St Francis did not say – “preach the gospel and if you have to – use words”.  Why do we need human words?  Surely the Holy Spirit can just convict and convert on his own?  You’ve heard the nonsense.  So why are you repeating it?  Because just as we use words so everything we do in proclaiming the Gospel uses art – from the architecture of the building to the typeface on your bulletin, from the covers of your bible to the style of your clothing, from the rhythm of your preaching cadences to the articles on your website, from the strumming of your psaltery to the metrication of your psalms. Everything uses art.

God could in theory convert people without means.  But he doesn’t.  He uses the preaching of the Word (and Keller clearly recognises the primacy of that – unlike PulpitandPen who seem to work on the primacy of polemic),  the love of his people, our service to the whole community and of course art – because art is in everything we do.

Now there is a narrower sense in which art is used – I guess the sense in which it is studied in art colleges. And if Keller was saying without painting we can’t communicate the Gospel then he would deserve the ridicule that comes his way. But  do you think Keller is restricting ‘art’ to the narrower sense of painting only (or perhaps ballet?).  Can’t you be a little more charitable and assume that a bible believing teacher such as Keller might actually know something about the bible, church history and evangelism?  At least enough to prevent him accusing Paul and Jesus of not knowing how to proclaim the Gospel?

The truth is that Keller and the upcoming downgrade in the PCA is not the problem.  He is not a heretic and his views on art are not heretical – they are basic Kuyperian Calvinism.   No, it is the ugliness of some who profess the Reformed Faith, those macho keypboard warriors who think that putting the adjective effeminate in front of anything is enough to damn it;  seeking their own niche and identity by dissing others who are the real heretics.  Why?  Because although they profess orthodox faith in Christ – it’s not enough.  We must reflect the glory and beauty of Christ.  To turn beauty into ashes is anti-Christ and the real heresy. 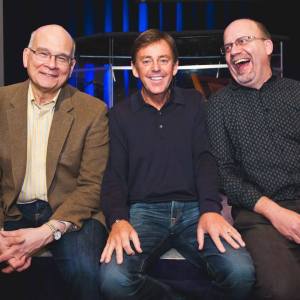 PS.  In the interests of full disclosure I have to point out that I regard Tim as a friend and a mentor.  This doesn’t mean he gets a free pass because of that.  You just don’t know Scots if you think that that is how we operate – we tend to be a lot harder on our friends.  We love that bit about the wounds of a friend being faithful – as long as we are doing the wounding!

Just to confirm PulpitandPen in their paranoia from the pit – here is the heretic Tim surrounded by two Scottish heretics enjoying the joy of the Lord…..sweet dreams…