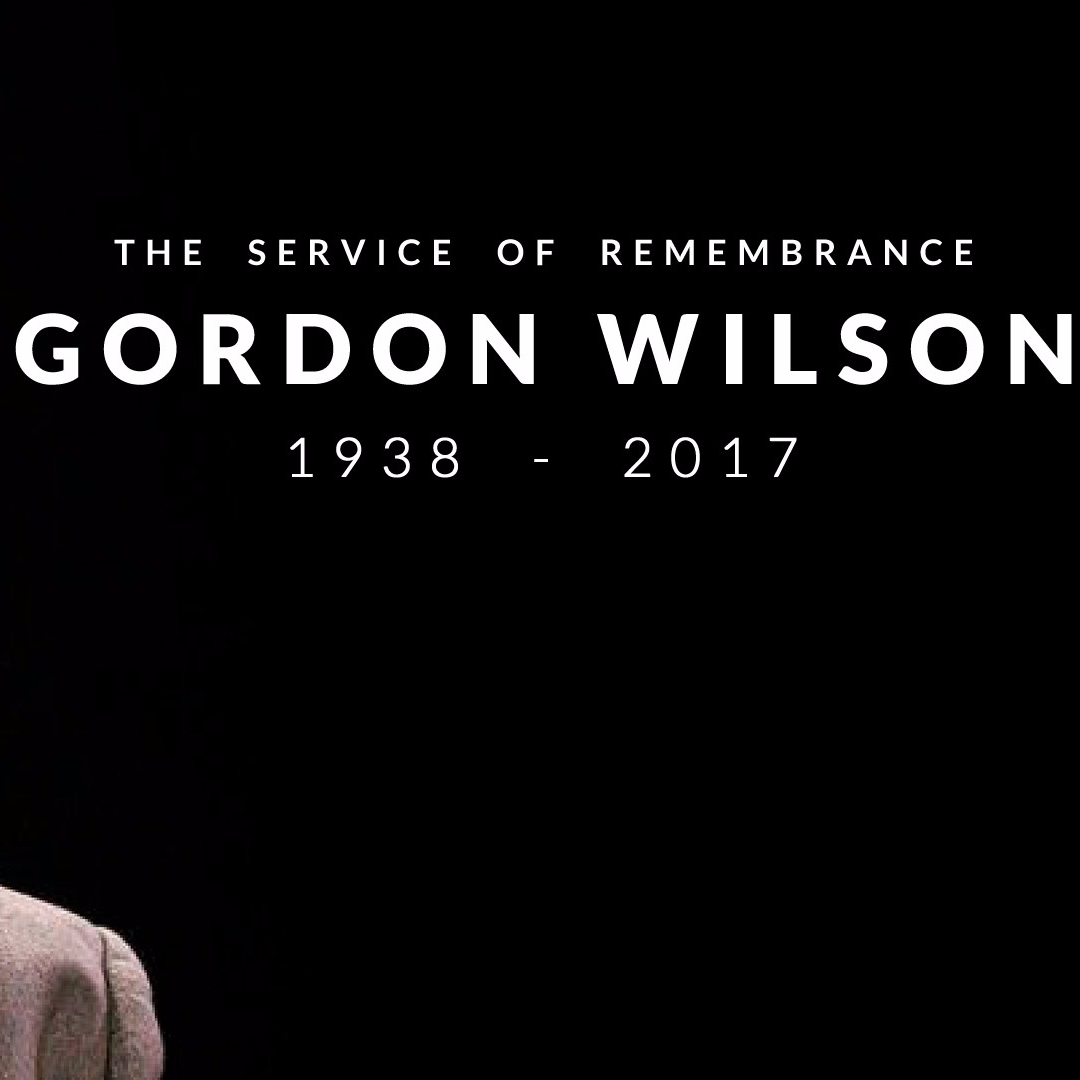 Here is the full memorial service for Gordon Wilson.  Its worth looking at the whole thing.  I will add a few thoughts below.

I wrote some observations on the funeral which I have since updated (the summary points are below).

2. The Congregation of St Peters glorified Christ by the way they served and worshipped.  I was so proud of them.  Because I was up front and ‘MC’d things I get a lot of credit when things go well and blame when they go badly.  But this was a real team (body) effort. So many people were stewards, served refreshment, led the praise, cleaned, did the gardens and the technical stuff.  It really felt like we were a body working together. And it was done with a joy and willingness which really communicated.  One old friend of Gordon’s approached me afterwards and remarked: “”I couldn’t understand why Gordon came to the Free Church – now I know!”

3. The Impact that one life can have –  Of course everyone who dies is a hero and the best person who has ever lived.   The hyperbole so common at funerals just becomes meaningless.  But this was not the case here.  We were at the funeral of a man who helped change Scotland.  We were witnessing and participants in history. As John Swinney pointed out we would not have a Scottish Parliament and all that has followed without Gordon.  But friends and family had even more to thank him for.  His family are lovely people who were a credit to him throughout the day.   A family man of integrity, intelligence and compassion leaves his legacy – especially in his family.

4. That Jesus is the way, the truth and the life  – There were three main elements in the service that reflected Gordon’s life.  His family, his political role and his faith in Christ.  All three were spoken of.  But I think the reading of the Word, the prayers, the heartfelt praise and the preaching of the Word all combined to point to the root and cause of it all – Christ.

5. The Roman Catholic view of Salvation is not as full as the Protestant (Biblical) – Bishop Vincent Logan is a lovely man who has sought to serve Christ for many years but in his prayer he reflected something that was really quite sad.   He prayed that Gordon being called from this world would be brought safely home to God’s kingdom and that he would be cleansed and given a place at the heavenly banquet.  In this he was reflecting the Catholic doctrine of purgatory and that believers don’t go directly to heaven.   But the biblical view is ‘today you will be with me in paradise’.  He was praying for something that Gordon already has.  When he came to believe in Jesus he was given eternal life.  When he died he did not go to purgatory to be cleansed.  He went to heaven to enter into the full joy of the inheritance Christ had bought for him.  I thought that the Bishops prayer brought out in sharp relief – the two positions.  On the one hand praying that the deceased would enter into heaven, on the other celebrating that he is already there!  As we had just sung “death is dead, love has won, Christ has conquered”!

6.  The Secular Media don’t get it –  I would like to write more on this but for me it was astonishing reading most of the media reports of the funeral.