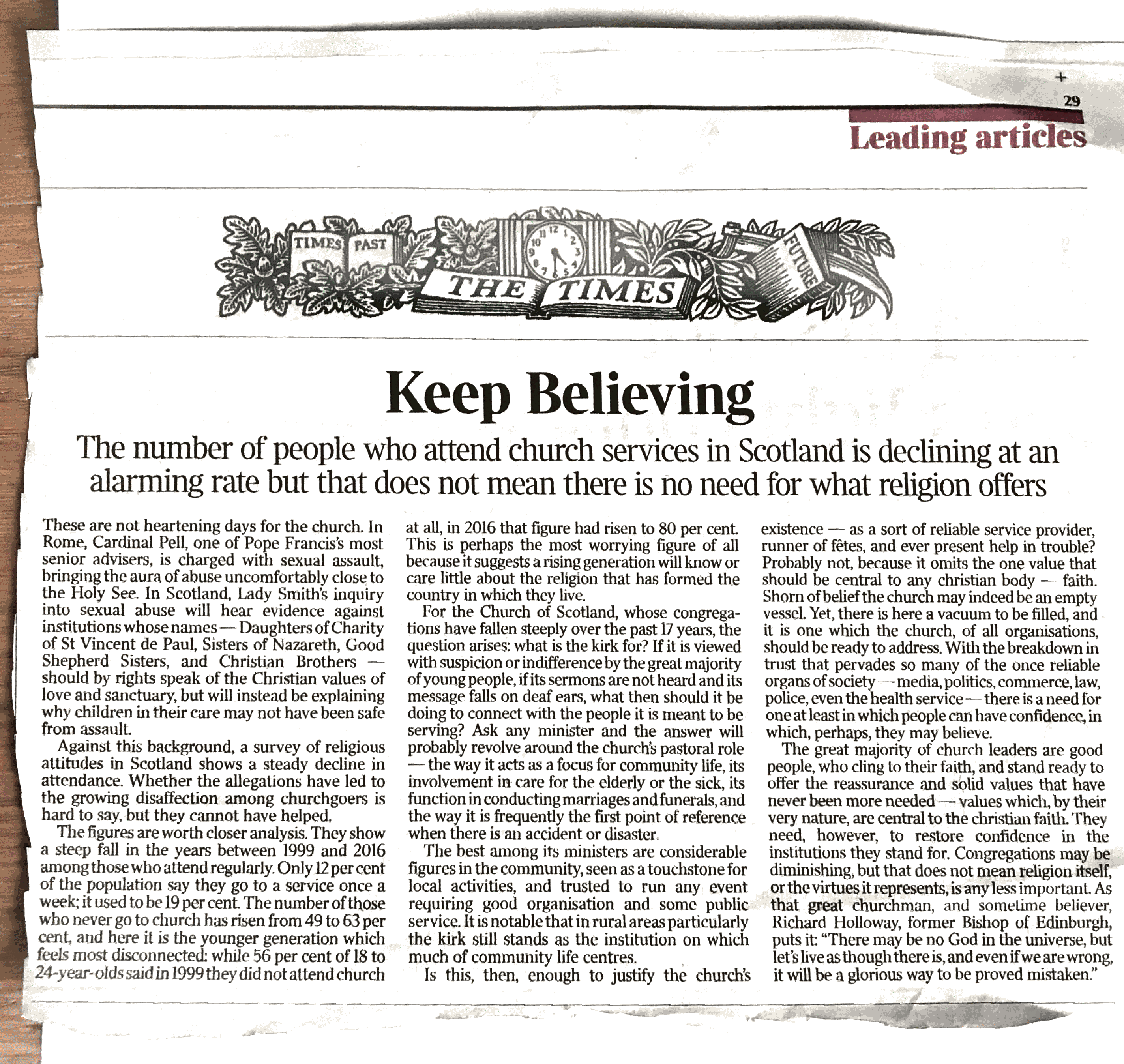 On Saturday The Times carried this extraordinary article.  (Kudos to The Times for taking this seriously and carrying this – unlike most of the rest of the Scottish press!).  To the delight of the Secularists it announced that almost 60% of Scots say they have no religion, the C of S has declined in the past 17 years from 35% to 18% of the population, Catholics from 15% to 10% and other Christians are now 11%.   What was fascinating is that 74% of young people say they have no faith, which is not surprising given that 80% of them say they have been brought up in non-religious households.  Atheist indoctrination begins at home!

None of this was news or surprising, but what was breathtaking was the solution offered by the ‘experts’.  Ian Montagu, a researcher, stated “If the kirk is able to push through liberalising measures such as allowing ministers to oversee same-sex marriages ceremonies, it is possible that its appeal may broaden to younger, more socially liberal Scots”.    Rev Norman Smith’s response was just as bad….the usual denial, relying on invisible Christians….’Other surveys show that Christianity continues to have an impact on people’s lives”;  and claims that it just needs to adjust how we get across the message.  No-one is facing the elephant in the room that the C of S having largely neglected the message of the Gospel and done precisely what Mr Montague urges, has found itself without a message to declare!

The Times then had this fascinating editorial

“shorn of belief the church may indeed be an empty vessel”

What is the Kirk for?

What a great question!  It notes that most ministers will say that it is little more than a glorified social work/community hub.   The Times correctly notes “shorn of belief the church may indeed be an empty vessel” but then quotes the atheist/agnostic former Bishop of Edinburgh Richard Holloway suggesting that we just fake it.

I was once approached by an elderly gentleman in our church hall who was there to pick up his granddaughter from a party.  He introduced himself as an elder in a rural kirk – “our minister doesn’t believe in teaching the bible”.  Those around looked aghast at him as he clearly did not know I was the minister of St Peters.  “Oh why is that?” I responded.

“He doesn’t believe that it attracts the young people”

“Thats interesting – in this Church they teach the bible for 30-40 minutes twice each Sunday and there are at least 100 young people.  How many young people are in your church?”

The Not So Slow or Lingering Death of the Kirk

If the C of S continues to go down the route suggested by Mr Montague and apparently endorsed by The Times it will not revive and renew.  It will die.  And it will deserve to die.

Of course yours truly wrote to The Times.  It wasn’t easy because I had to reduce my letter to 150 words (apparently Times readers can’t cope with anything longer!). The original is reproduced below.

It was also interesting to note that there was no response from the C of S but that instead our old friend, Peter Kearney of the Catholic church had a good reply.  His line “Decline is most catastrophic amongst Christian denominations who have embraced secular liberalism” is spot on.

Whilst church leaders are desperately trying to bury their heads in the sand and declare that the survey is really missing out on so much, and that they and their churches are still really important and that many people are really secret or wannabe believers, I want to go the other way and suggest that the report is way too optimistic!  It states that 12% of the population of Scotland attend church on a weekly basis.   That is way off the mark.  Recent actual figures suggest that in Edinburgh it is around 1%, Aberdeen 2% and in other places not much more.  12% in Dundee would mean that last Sunday almost 20,000 people were in church in our great city.  It almost certainly wasn’t even half that.

However is not all bad news.  There are churches that are growing and developing in Scotland – and they tend to be the ones that are going precisely the opposite route suggested by Mr Montague.

But there are also many that go that opposite route who are still struggling.  What is the solution?  We need the unction of the Holy Spirit, faithfulness to the Word of God and a passionate commitment which reflects that we are not part-time members of a religious social club, but fully signed up disciples/soldiers/hard-working farmers and members of the family of God.  Its time for real Christians to ‘come out’, unite together and live the radical lives of the disciples of Jesus Christ!

I read with interest and some degree of sorrow your report and editorial comment on the decline within the church in Scotland (The Times 1st July) . The collapse of the Church of Scotland, decline in the Catholic Church and the rise to 58% of those who say they have no religion is something to be lamented in this nation whose very foundation is Christianity. However the solution offered by your analyst and the editorial is a recipe not for combatting the decline but for continuing it. The idea that if only the Church could keep up with the current zeitgeist and accept the socially liberal attitudes of the current political, educational and arts establishment. then our ‘appeal would extend once more to those who have disregarded it in increasing numbers’ is fanciful. The Church of Scotland in its recent decisions has been doing precisely that and yet this has caused its decline to accelerate not be reversed. We should not be surprised at this. As someone once remarked – she who marries the spirit of this age, will soon be a widow in the next. There are churches that are growing – and they tend to be the more evangelical and biblical ones. Why should that surprise us? If all the church has to offer us is a sanitised state approved ‘spirituality’ then it will continue to decline. On the other hand if it offers the radical gospel of Jesus Christ it will experience both persecution and growth, despite, or perhaps because of, its different values to those of contemporary society.

Ps.  I also had a letter in The Scotsman on a different subject – but as that one will really set the cat amongst the pigeons it can wait until tomorrow!

The Secularisation of the Church of Scotland – What Really Happened at the Assembly?

And this was from yesterdays sermon on Romans 2  in which I referenced this report.