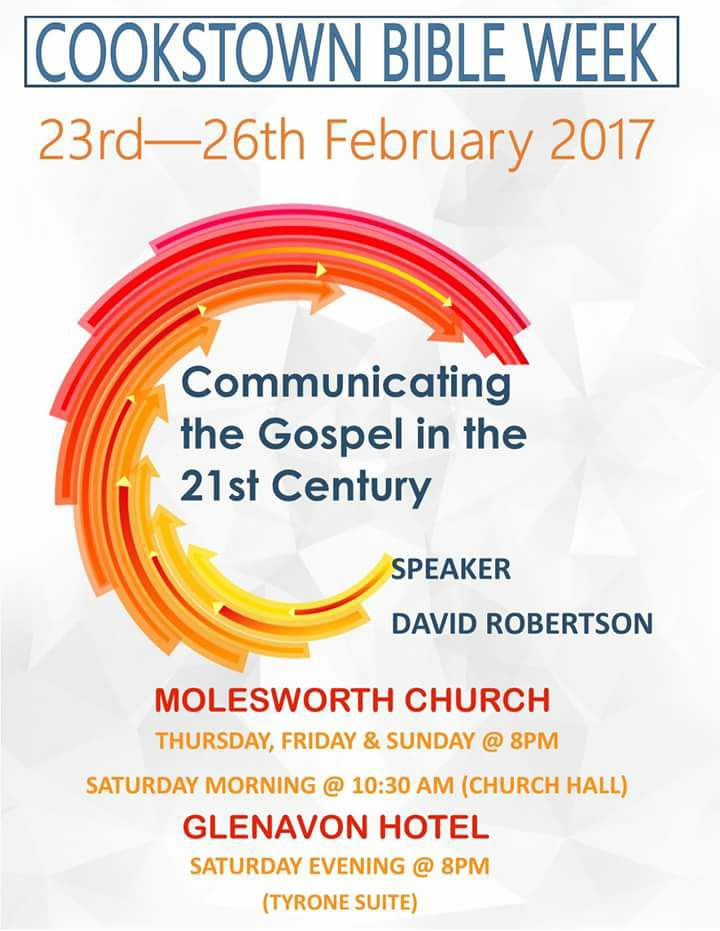 Its a joy and a privilege to be here in Northern Ireland.  The more I come here and the more I get to know the people both here and those in St Peters, the more I love both place and people.  There are things that are very different, and also much that is similar.    I am here

for the Cookstown Bible week and it is a joy to be preaching the word of God in an almost full church each night.

And therein lies one difference. Northern Ireland is still a much more Christian place than anywhere else in the UK (perhaps apart from Lewis and Harris).  Even a midsize town like Cookstown (pop.11,000) has numerous churches – Presbyterian, Reformed Presbyterian, Baptist, Catholic, Church of Ireland, Independent Methodist, Brethren, Pentecostal, Church of God and others.  And the impression from the Bible week, which involves some of these churches getting together is at first good.  There are few such towns in Scotland where you could get a couple of hundred people each night to praise God and hear the word.   But all is not as well as might seem. The demographic is primarily middle-aged and elderly and it is clear that Northern Ireland is now undergoing a similar secularisation to what has happened in Scotland.   I have a suspicion that materialism, liberal theology, evangelical confusion, traditionalism, division,  legalism, prayerlessness and pride are the problems that face the church here, as much as they do the church in Scotland.  That is a challenge the church has to face up to.
Northern Ire

land is a different place – and I love the differences.  It’s still quite strange for me to drive through streets where union jacks are flying.  Being patriotically British is not something one sees a lot in Scotland!  This photo is the main street complete with British flag.      I also love listening to Radio Ulster  – it’s somehow very homey and warm – apart from the phone ins! Maybe I just tuned in at the wrong time but it seems as though Country and Western is the national music of Northern Ireland! There are some dull and dreary looking places (not helped by the rain) but overall the scenery is beautiful. But best of all are the people Ulster people are largely Scots. They have a dry sense of humour and are open, welcoming and friendly. There is a refreshing reality which makes its them a joy to be amongst. Northern Ireland’s greatest asset is its people.
I really enjoyed being in Cookstown High School.  It was a sad reminder of what we have largely lost in Scotland – our emphasis on Christian education.  I was impressed with both pupils and teachers  and the ethos and Christian principles on which that ethos is based. The pupils were respectful, well-behaved, valued and encouraged.    Of course our atheists friends say – yes that’s what we want as well, but without the Christianity.  But thats like asking to have the fruit without the roots.

When I posted the photo above of the statement of ethos – the atheists went mad!  Is this not is what is wrong with Northern Ireland?  Religious division.  Imagine no religion, then we would have nothing to kill or die for!  But here’s the problem….I’m not seeing the hatred and division caused by religion.  I’m sure it exists and has been an exacerbating factor but one suspects that Marxism and Irish culture was a bigger factor for the IRA than Catholicism.   It seems to me that Christian schools, whether Protestant or Catholic, where all are taught about respect for one’s neighbours because all are made in the image of God, are a good thing.

All I hear about is atheists talking about divisions and hatred.  And I really just want to say to them.  Get over yourselves.  Stop using your doctrines to justify attacking people.  And keep up with the march of history.  Catch up with the times.   It’s the atheists who want to talk up the hatred in order to impose their own values.    You seriously believe that the only way to peace and love is your way, but you can’t even define what peace and love is, and you seem to be struggling to produce it.  So here’s a wee experiment from the Bible (I know it makes you spit but hang with it!).   There is the story told of Elijah and the prophets of Baal.  How were the people of Israel to choose the right God and way to live?  Elijah set up a wee contest between him and the 400 prophets and just simply stated ‘the God who answers by fire let him be God’.  In other words  lets see the results.  As Jesus said, you shall know them by their fruits.

I look at the fruits of the atheistic secular humanism which now predominates in many schools in Scotland and I see the rudeness, indiscipline, lack of learning and the attempts at social engineering.  Then I contrast with what I seen here – the respect, love for learning, discipline and freedom of thought and I know which one I prefer.   So why won’t our atheists and humanists allow us the freedom to have these kind of schools in Scotland?  Is it because ultimately they care more for their ideology than they do for the welfare of our children?

We have a lot to learn from Northern Ireland….maybe I’ll reflect some more on this when I get home…meanwhile got to head off to get ready for an outreach meeting in a hotel tonight and church services tomorrow.  May the Lord bless this wonderful land and people.