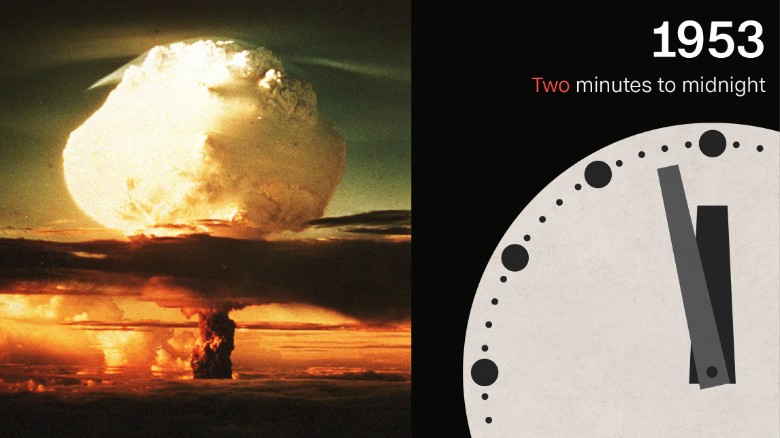 A very sombre looking Laurence Krauss and other ‘experts’ (scientists and academics) held a very solemn ceremony this week, which was solemnly reported by CNN and other mainstream news media.  The doomsday clock  was moved forward 30 seconds to two minutes before midnight.

Don’t you just love fake news and alternative facts?   The same media who attack Trump and others for making things up, laud a group of ‘experts’ who treat as a ‘fact’ the moving of an imaginary hand on an imaginary clock towards an imaginary apocalypse!

Instead of these doom mongering, self-important, pontificating ‘experts’ I prefer to deal with real facts.  John Newton in his letter to a politician of the day (July 1777) put it wonderfully when reflecting on reading history:

“I have lately read Robertson’s History of Charles V, which, like most other histories, I consider as a comment upon those passages of Scripture which teach us the depravity of man, the deceitfulness of the heart, the ruinous effects of sin, and the powerful, though secret, rule of Divine Providence, moving, directing, controlling the designs and actions of men, with an unerring hand, to the accomplishment of his own purposes, both of mercy and judgement.

Without the clue and light which the word of God affords, the history of mankind, of any, of every age, only presents to view a labyrinth and a chaos; a detail of wickedness and misery to make us tremble, and a confused jumble of interfering incidents, as destitute of stability, connexion, or order, as the clouds which fly over our heads.  In this view, Delirant reges, pectuntur Achivi (The Kings go mad and it is the Greeks, their subjects, who are punished), may serve as  a motto to all the histories I have seen.

But with the Scripture key, all is plain, all is instructive.  Then I see, verily there is a God, who governs the earth, who pours contempt upon princes, takes the wise in their own craftiness, overrules the the wrath and pride of man to bring his own designs to pass, and restrains all that is not necessary to that end; blasting the best concerted enterprises at one time, by means apparently slight, and altogether unexpected, and at other times producing the most important events, from instruments and circumstances which are at first thought too feeble and trivial to deserve notice.

This is the key to avoid the kind of doom and gloom that all sides of the culture war seem to indulge in.  Instead of reading the bible through the eyes of history and contemporary politics, the Christian has the great advantage of being able to read history and contemporary politics through the eyes of the bible.  In effect,  our current cultural/political commentators are like those who are looking through a telescope the wrong way round.  Maybe its time we all got a sense of perspective?

In that same letter Newton quotes the French writer Nicole – his words need to be heeded by our leaders – Trump, Putin, May, Sturgeon et al…

“A great man to his own way of thinking is not one man all by himself.  He is a man surrounded by all those who serve him, and who imagines that he has as many hands as all of them put together, because he has the use and control of them.  An army general thinks of himself as standing in the midst of all his soldiers.  In this way each man tries in his imagination to occupy the greatest possible space, and everyone promotes himself and inflates his own importance in the world in order to enhance his own self-image.   That is the goal of all the schemes made by ambitious men.  Alexander and Caesar had no other aim save this in all their battles.”

As Newton puts it – ‘we are fallen into a state of gross idolatry, and self is the idol we worship’….

Amazing grace, how sweet the sound

I once was lost, but now am found

Was blind, but now I see.