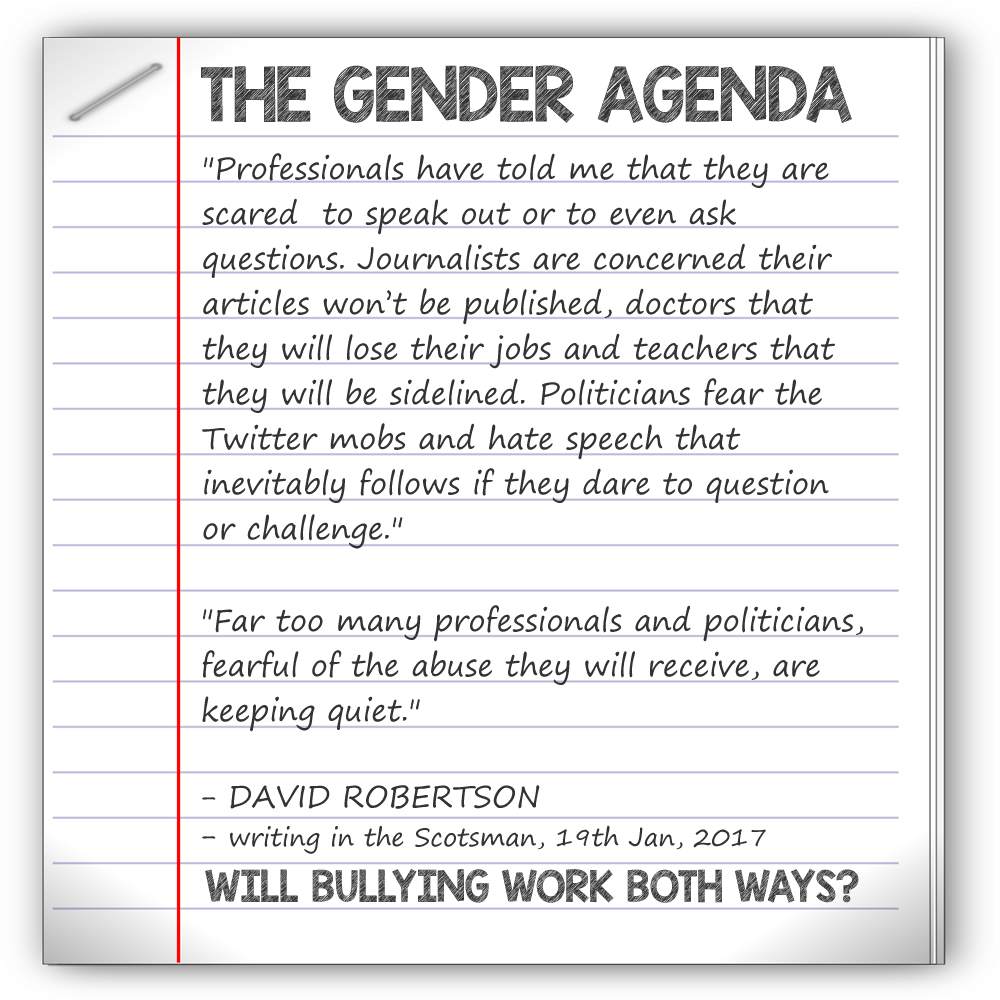 Here’s the text of my article that was published today in the Scotsman.  You can read more at: http://www.scotsman.com/news/opinion/dare-to-debate-this-damaging-idea-that-gender-is-a-social-construct-1-4342596

Dare to debate this damaging idea that gender is a social construct.

There is a fear that dare not speak its name, a question that dare not be asked. An ideology is being foisted on Scotland’s children which, though well-meaning, is ultimately harmful.

Professionals have told me that they are scared to speak out or to even ask questions. Journalists are concerned their articles won’t be published, doctors that they will lose their jobs and teachers that they will be sidelined. Politicians fear the Twitter mobs and hate speech that inevitably follows if they dare to question or challenge.

It’s a “gender agenda” that aims at a complete moral, social, psychological, sexual and spiritual revolution. And it is aimed at young children in a crass attempt to indoctrinate. It is taught under the guise of seeking to protect people with different sexual orientations and those who suffer from gender dysphoria (transgender), but goes much further than that.

It is an attempt to teach that gender is just a social construct and nothing to do with biological sex. Human autonomy now extends to the extent that you get to choose your own gender. And there are now longer just two – that is so 20th Century! Now, according to Facebook, we can choose 56. Gender identity is fluid. Not all transgender people agree with this radical removal of gender but this is the trajectory we are on.

Apart from the fact that there is zero empirical evidence that gender is a social construct with no relation to biology, it is surely harmful to young children to tell them that they get to choose whether they are male or female or any of the varieties in between. 84 per cent of children who experience gender identity issues resort to their biological gender by the time they are in adulthood. Giving puberty blockers to primary children, or telling five year olds that they can identify as whatever they want, is at best, unwise, and at worst, a form of state sponsored child abuse.

I think of the seven-year-old girl who came home from school and asked her parents whether she was a boy or a girl, because the teacher had told the class that they could choose. Or the 14-year-old boy suffering from depression, who announced that he was really a girl because his guidance teacher had suggested that this might be the reason for his depression. Bear in mind that a transgender teenager is twenty times more likely to attempt suicide than a non-transgender. Its all too easy to believe (because of your ideology) that this is entirely because of non-acceptance and therefore to use this fact as a reason to further push the ideology which causes so much harm, rather than question where that ideology leads.

The political ideology means that gender dysphoria is no longer treated as a psychological condition. Rather than seeking to help by focusing on mental health and psychology, we are now told that changing appearance, hormones and anatomy is the solution. Instead of trying to change the mind to fit with the body, the body is changed to fit with the mind. And the success rate is poor. One doctor said he was stopping doing such operations because they had an 80 per cent negative outcome. Professor Paul McHugh of the John Hopkins Medical School, one of the first in the world to offer gender reassignment surgery, now says the process is so harmful they have stopped doing them.

But that doesn’t stop the gender fluid ideologists. It is the cause celebre of the “virtue signaling” elites. Lloyds Bank now offers sex-change operations to staff under its private health scheme and the UK and Scottish Governments are both preparing legislation to allow people to change their gender without any need for psychological or medical assessment.

But it is primarily through the education system that this ideology is spreading. At the UK Parliament debate on Transgender at the end of last year, one MP declared it was only through the minds of children and the young that attitudes would change. This should greatly concern us. As should the fact that the number of children in the UK claiming to have been born in the wrong body has risen 1,000 per cent in the past five years (from 97 to 1013).

The Time for Inclusive Education programme is a Trojan Horse that seeks to indoctrinate all children into this ideology and not allow any diversion from it. It’s inclusive only in the sense that it wants to make this compulsory for all children, whatever their families want. It is not inclusive in the sense that other points of view will be allowed. Far too many professionals and politicians, fearful of the abuse they will receive, are keeping quiet. But surely it is time for a proper debate where evidence, facts and different points of view can be considered?

Or has Scotland become such an authoritarian culture that it is now no longer possible to have such a debate?

Footnote:  In something that is almost beyond caricature – after my warning about the attempt to shut down, intimidate and bully, I have received numerous messages telling me how wrong/wicked/ignorant/rightwing/stupid etc I am.  More chillingly there have been a number of implied threats made against the Scotsman demnading that they apologise, that the editor is sacked etc.   It was nice of them to prove my article….and if they think they can shut me up, they have another think coming!