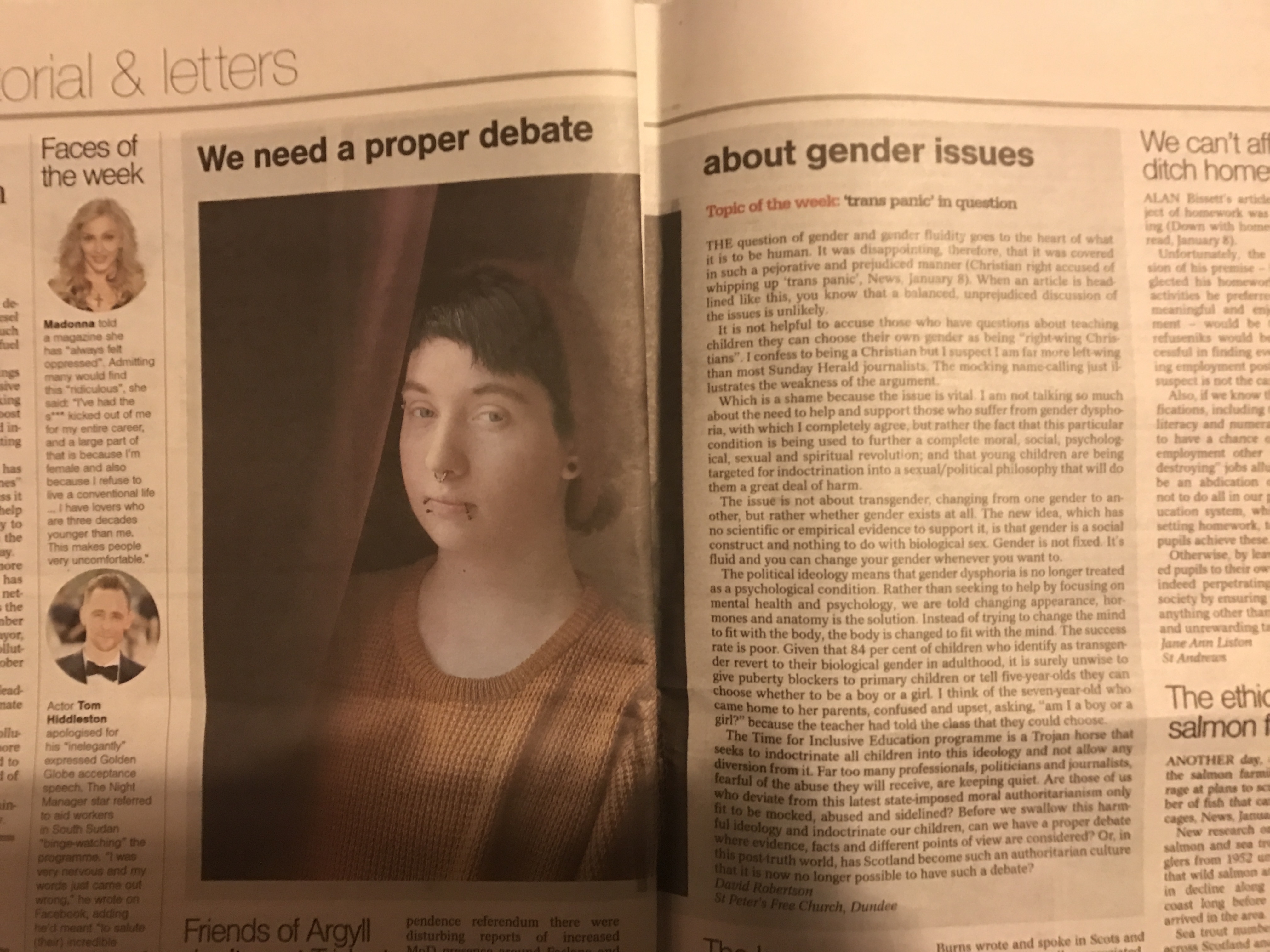 On Sunday the 8th the Sunday Herald ran a ridiculous piece about the TIE campaign and Transgender rights, where it did not deal with the issues and killed any sensible discussion with the headline ‘Christian Right accused of whipping up trans-panic’.  Although I was not allowed an article as a right of reply, they did agree to publish the following letter as their lead letter.  To be fair to the editor, Neil Mackay, he was true to his word.  You can read the text below and the original letter Here

The whole question of gender and gender fluidity is an important issue that goes to the heart of what it is to be human; therefore it was disappointing that it was covered in such a pejorative and prejudiced manner in The Sunday Herald (Christian right accused of whipping up ‘trans panic’, News, January 8). When an article is headlined like this, you know that a balanced, unprejudiced discussion of the issues is unlikely.

It is not helpful to accuse those who have questions about teaching children they can choose their own gender, as being “right-wing Christians”. I confess to being a Christian but I suspect I am far more left-wing than most Sunday Herald journalists. The mocking name-calling just illustrates the weakness of the argument.

Which is a shame because the issue is vital. I am not talking so much about the need to help and support those who suffer from gender dysphoria, with which I completely agree, but rather the fact that this particular condition is being used to further a complete moral, social, psychological, sexual and spiritual revolution. And that young children are being targeted for indoctrination into a sexual/political philosophy that will do them a great deal of harm.

The issue is not about transgender, changing from one gender to another, but rather whether gender exists at all. The new idea, which has no scientific or empirical evidence to support it, is that gender is just a social construct and nothing to do with biological sex. Gender is not fixed. It’s fluid and you can change your gender whenever you want to.

The political ideology means that gender dysphoria is no longer treated as a psychological condition. Rather than seeking to help by focusing on mental health and psychology, we are now told that changing appearance, hormones and anatomy is the solution. Instead of trying to change the mind to fit with the body, the body is changed to fit with the mind. And the success rate is poor. Given that 84 per cent of children who identify as transgender revert to their biological gender in adulthood, it is surely unwise to give puberty blockers to primary children or tell five-year-olds that they can choose whether to be a boy or a girl. I think of the seven-year-old who came home to her parents, confused and upset, asking, “am I a boy or a girl?” because the teacher had told the class that they could choose.

The Time for Inclusive Education programme is a Trojan horse that seeks to indoctrinate all children into this ideology and not allow any diversion from it. Far too many professionals, politicians and journalists, fearful of the abuse they will receive, are keeping quiet. Are those of us who deviate from this latest state-imposed moral authoritarianism only fit to be mocked, abused and sidelined?

Before we swallow this harmful ideology wholesale and indoctrinate our children with it, can we at least have a proper debate where evidence, facts and different points of view can be considered? Or in this post-truth world, has Scotland become such an authoritarian culture that it is now no longer possible to have such a debate?

My view is that now is the time for people to stand up on this issue.  The Scottish Government are now saying they are in support of TIE…it is incredibly harmful.  We need to make people aware of what is going on.  It would be really good if the Church of Scotland, the Baptist Union, The Catholic Church and others made public their opposition to our children being taught this nonsense….