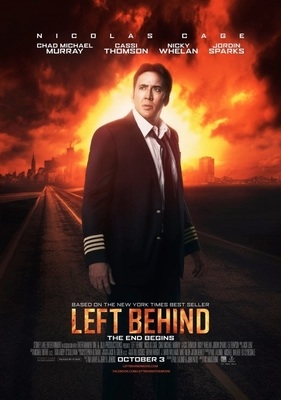 The unedited original is below….

I originally entitled it – The Open Door

There is an old limerick “ Two men looked out of prison bars, one saw earth and one saw stars”.     What do you see when you look at the Church in the West today? Some churches copy the business practice of SWOT analysis, looking at the Strengths, Weaknesses, Opportunities and Threats. In Christ’s Letters to the Seven Churches in Revelation 2 and 3, it’s as though he has been conducting his own SWOT analysis on the Church in the West today.

The influential Left Behind novels and film are based on pre-millennialist theology.

In the English-speaking churches in the 19th century there was an optimism that existed because of a combination of political, social, economic and theological considerations. Regarding the latter, the predominant theology was that of ‘post-millennialism’. This meant Christians believed that the Church of Christ would increase rather than shrink, the Kingdom of Christ would grow and the rulers of the world would bow the knee to Jesus. However in the latter part of the century an Anglican clergyman, JN Darby, developed the Plymouth Brethren movement and focused on a narrow and specific ‘pre-millennial’ system. Through the Brethren and then especially in the United States through the influential Scofield Reference Bible, pre-millennialism became the predominant ‘end-times’ theology in the Western world.

Why is this important? Because pre-millennialism was profoundly pessimistic about the growth of the Church and the future of the world. In opposition to post-millennialism, the pre-millennialists believed that the ship was sinking, the world was going to get worse and the Church just had to huddle down, get into the lifeboats and hold on until the Rapture and then the return of Christ.

Although the vast majority of Christians may not hold to or even know the details or pre-tribulation, rapture and post-millennial theology, the fact is that it continues to have a profound impact upon much evangelical thinking today. And this is where the letter to Philadelphia comes in.

Philadelphia was the gateway to the East. It lay on the main route from Rome and was known as ‘little Athens’, because of the many temples in the city. It was a famously insecure place because of the frequent earthquakes. The ancient geographer Strabo wrote: “The walls never cease being cracked, and different parts of the city are constantly suffering damage. That is why the actual town has few inhabitants, but the majority live as farmers in the countryside, as they have fertile land.”

The church there was small and not very strong (Revelation 3:8) and yet was commended by Christ for keeping his word and not denying his name. They experienced strong opposition but their faithfulness was rewarded with fruitfulness and there was nothing the enemy could do about it.

And now Jesus tells them that he has given them an open door. This is not an accident, a fortunate set of circumstances. It is not a door they have to knock on, or kick down. It’s a door that has been opened by the one who holds the ‘key of David’. What he opens no one can shut and what he shuts no one can open. Once again, John is citing the Old Testament: “I will place on his shoulder the key to the house of David; what he opens no-one can shut, and what he shuts no-one can open” (Isaiah 22:22).

If there is one doctrine that the Church in the West needs to recover today it is that of the sovereignty of God. Jesus is Lord. We show we have forgotten that when in order to ‘defend Christianity’ we endorse as the ‘Christian’ candidate in the American presidential election a man who boasts about his anti-Christian attitudes or a woman who boasts about her anti-Christian morality. The justification I have heard from Christians on both sides is that we don’t like them but we have to endorse them or worse will happen.

The same has happened on this side of the pond when Christians think that their views on Brexit are essential to the maintenance of the gospel. Do we not realise how puny and pathetic it is that we play power politics with our limited knowledge and abilities? Does it not display a lack of trust in the sovereignty of God? We are certainly entitled and encouraged as free citizens in a democracy to have our own political views – but we are not to make the Kingdom of God dependent on them. Sometimes the Lord will use a pagan king, like Cyrus, to fulfill his will. Sometimes he will convert the Emperor. But at all times those who are his people need to rely on him to open the door.

This concept of the open door for the gospel is key in the New Testament.

Paul writes to the Corinthians: “Because a great door for effective work has opened to me, and there are many who oppose me” (1 Corinthians 16:9). “Now when I went to Troas to preach the gospel of Christ and found that the Lord had opened a door for me” (2 Corinthians 2:12). “On arriving there, they gathered the church together and reported all that God had done through them and how he had opened the door of faith to the Gentiles” (Acts 14:27) .

The Church in the West today should not be hunkering down and waiting for the End Times, trying to work out a detailed timetable from a combination of the book of Revelation and Hal Lindsay’s The Late Great Planet Earth. We should not be looking round in despair at the mess all about us. We should not be banging our heads against the closed doors but rather looking for the open doors and walking through them.

After writing The Dawkins Letters I was speaking in a large Edinburgh bookstore when a Christian asked me, “Do you not think it’s terrible that Dawkins wrote The God Delusion? Is it not a sign of the End Times?”. My response? No. Take a look around you. What is the number one book in this store? The God Delusion. A book about God, Jesus and the Bible – asking all the right questions but giving all the wrong answers. What an opportunity for us!

I have been involved in ministry in the UK for 30 years and I would say that there has never been such a time as today where people are so open to the gospel, or the Church so ill-prepared to communicate it. This is in spite of (or indeed perhaps because of) the secular opposition and antipathy towards biblical Christianity.

The Catholic philosopher Charles Taylor, in his magnificent work A Secular Age, believes that “we are just at the beginning of a new age of religious searching”. I agree. In the postmodern marketplace of ideas we have the best idea of all – the good news of Jesus Christ. The door is open.

Recently I was invited into a university to debate. There was nothing unusual about this except for the fact that it was not arranged by the Christian Union but by the university itself, who wanted the students to hear a ‘radical Christian’ perspective because they assumed (rightly) that the vast majority of their students would never have come across it. It was an open door and it went so well that they have invited me back. The truth is that even gospel ignorance gives us the opportunity to bring gospel knowledge.

The Confidence of Christ

Instead of constantly going on about threats, cowering or abusing in fear, we need to have the confidence of Christ.   He promises that he is coming soon, that he is going to make us “pillars in the temple of my God”, and that we will be part of that enduring building. We are not collapsing pillars but abiding pillars, “built on the foundation of the apostles and prophets, with Christ Jesus himself as the chief cornerstone.In him the whole building is joined together and rises to become a holy temple in the Lord” (Ephesians 2:20-21). Whoever is elected US president, or whatever political system currently prevails in Europe, I have no fears whatsoever for the Church of Jesus Christ. In a few years they will be gone but the Word of Christ, the Gospel of Christ and the Church of Christ will continue. “Yesterday, Today, Forever, Jesus is the same. All may change, but Jesus never. Glory to his name!”

The Name above all Names

And what a name! A name that is given to us. A wonderful new identity promised. We live in a culture where it is presumed, falsely, that we can just re-invent our own identity. We can re-brand and re-name ourselves.   Except its all shallow nonsense.But the way of Christ is different. There is real change, real renewal and real hope.

Philadelphia was known by two other names, so the Christians there would have appreciated the point: Jesus tells them, you are my people, you are small, you are weak, but I am giving you a “new name”. “His eyes are like blazing fire, and on his head are many crowns. He has a name written on him that no-one knows but he himself” (Revelation 19:12). And we are being given his name – the name that is above every name, and at which every knee shall bow.

I don’t care too much about your millennial views. I don’t know when Jesus is returning. I just know that he is. And I know that the gates of Hell will not prevail against his Church. What a difference it would make to each one of us if we woke up in the morning and just simply prayed “Lord, what open doors have you set before us today?”

Then instead of banging our heads against a brick wall, or curling up in despair; we would walk through those Good News doors.