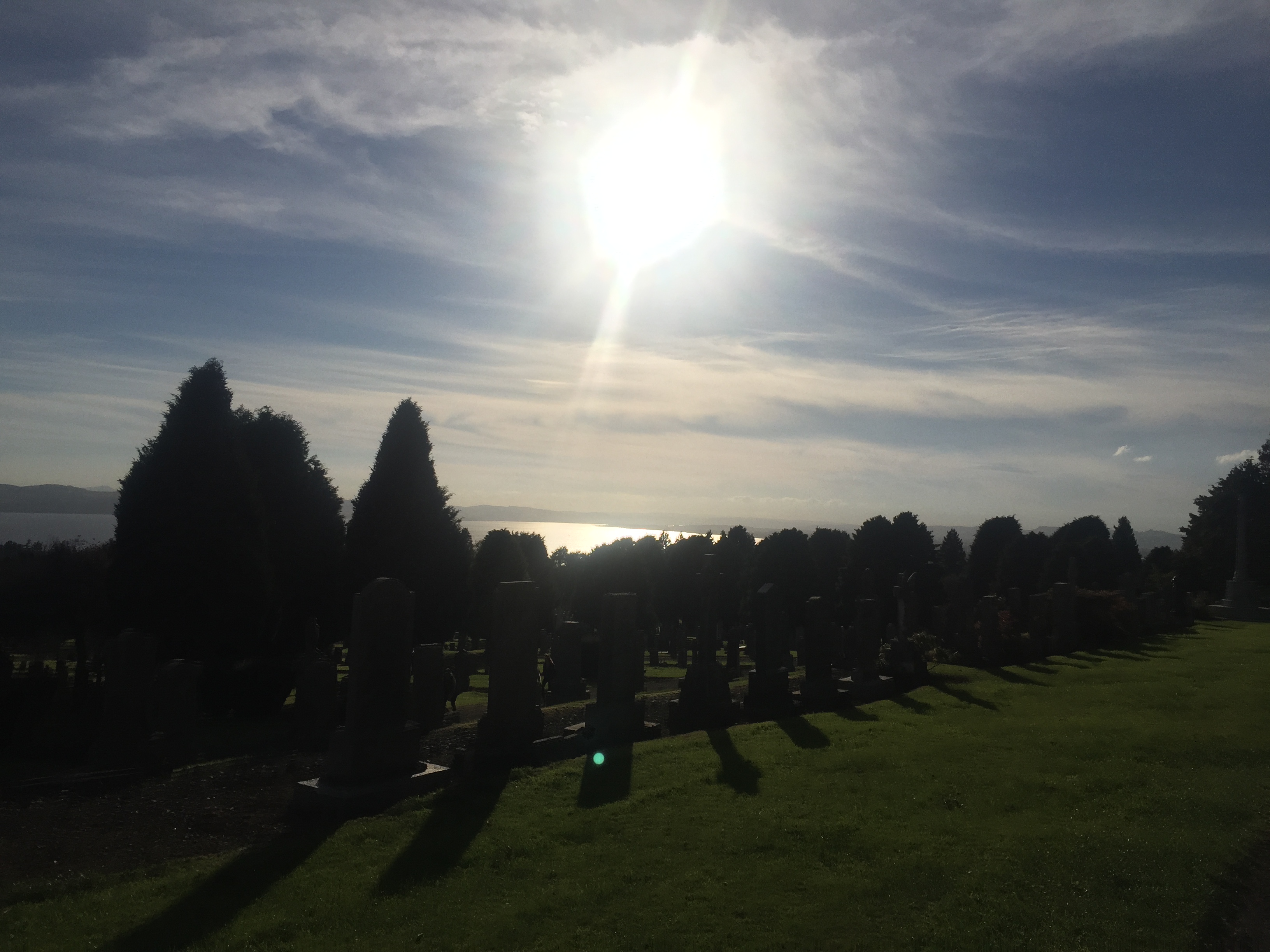 Don’t worry, despite the headline this is not about Donald Trump’s disastrous campaign or the UK leadership contest, or the Labour Party’s collapse in Scotland. This is a politics free zone!

October seems to me the time of year that I specialise in personal disasters. Yesterday, true to form, I was cycling through the beautiful Balgay Hill Cemetery, when I swerved to avoid a council van heading towards me. I was listening to Melvyn Bragg’s ‘In Our Time’ podcast, and was generally very happy with life. And why not? It was a beautiful autumn morning and Balgay is stunning at this time of year. I had a full day ahead, preparing Sunday morning’s service and speaking at the launch of the launch of the Don’t Stop a Beating Heart campaign in Linlithgow’s. But as they say the best laid plans of mice and men…

After avoiding the Council van, I hit the kerb and found myself flying in slow motion towards a grave. I landed on my shoulder, and although it was quite painful, I quickly got up, cleared off the mud and decided that because my bike was undamaged and I thought, only my pride was hurt, to continue my journey. I stopped at Clarke’s bakery and ordered a bacon roll. The next thing I remember was lying on the floor in the middle of the bakery surrounded by a crowd of people, with an ambulance on the way. I foolishly told the ambulance that I was fine, although I was dripping with a cold sweat, but when I stood up blacked out again.

I was greatly taken with the kindness of the staff at Clarks, and especially the two young joiners who took my bike, chained it and even offered to take it home for me. Dundee’s finest!

I don’t think I was fully compos mentis, because when the ambulance staff asked me if I had any medical history, I said not much. And then when they heard about my escapades in 2011, and my subsequent history including pneumonia last week, they burst out laughing. “Not much history!… There’s no way we’re letting you go, we’re going to take you up to Ninewells.”

Once there the doctors checked me out, I was x-rayed, and diagnosed with having a cracked or bruised clavicle. They wanted to keep me in until my blood pressure had risen to normal and the nausea had stopped. Basically, the only reason I collapsed was because my blood pressure dropped because of the shock and the pain after the accident. And I guess my history with low blood pressure and collapses insured the rest. I just wish that I wouldn’t collapse in such public places – the church, outside a doctor’s surgery, the middle of Heathrow airport, the DCA and now Clarks the bakers to be added to the list!

As usual the staff at Ninewells were superb. I loved especially the redheaded catholic doctor who couldn’t stop laughing when I told her how the accident happened. Anyway we had a nice wee theological chat!

Even in these small incidents there is so much to learn and to be thankful for.

For the first time I had set up an automatic tweet, which went out at 11 am saying that I was looking forward to speaking at the SPUC event in Linlithgow. When it actually went out, I was lying on a hospital bed. It’s just a reminder of the wisdom of James “Now listen, you who say, “Today or tomorrow we will go to this or that city, spend a year there, carry on business and make money.” 14 Why, you do not even know what will happen tomorrow. What is your life? You are a mist that appears for a little while and then vanishes. 15 Instead, you ought to say, “If it is the Lord’s will, we will live and do this or that.” (Ch.4)

It also brought back memories for Annabel as we drove back from the hospital to our home – a journey that she was all too familiar with, having made it every day for a few weeks when things were not quite as rosy as they were yesterday.

I am very grateful for the preserving grace of God.

I was travelling at quite a speed and the situation could have been a lot worse!

I suppose it has convinced me that I probably should be wearing a helmet. The grace of God does not mean that we should not use common sense, or tempt providence.

I realise that given the somewhat humorous circumstances of my accident (minthere are a variety of puns awaiting me. Already the world’s worst joker, Andy Bannister, has come up with “a grave situation”, and “tomb with a view”! I much prefer “up from the grave he arose, with a mighty triumph o’r his foes”….

All in all, I have much to be thankful for, although sitting looking out the window at what is an absolutely gorgeous and perfect day for cycling is a wee bit frustrating. As is not being able to type, and having to rely on Dragon to understand my voice. Anyway I suppose I’d better get off the computer and return to the delights of Inspector Lewis and a few books that I have to catch up with.