Earlier this month The Scotsman and The Courier both carried articles which boasted about Scotland becoming a more ‘tolerant’ nation.   The Scotsman even ran an editorial which was as good an example of hubristic self-congratulation as one could wish for.  I wrote the following letter in response.  The Courier published it but The Scotsman refused – I suspect because I critiqued their editorial and one thing a tolerant society must not allow is for its chief opinion formers to be questioned!

There is a certain degree of hubris in the self-congratulatory tone in the article and editorial about Scotland becoming more tolerant (Scotsman 1st October).  Apart from questioning the methodology of whether a limited survey of attitudes actually tells us what the practice is, the real problem is the definition of tolerance.  Whilst there have been positive and welcome changes in some attitudes I wonder if questioning whether Scotland is more tolerant, will itself be tolerated.

I’m afraid I don’t buy into the myth of modern progressive tolerant Scotland. The recent referendums, the hate mobs on twitter if you dare to question any of the establishment liberal version of morality, the intolerance about the disabled in the womb, the stigma attached to mental health, a noted growth in anti-semitism, the hatred directed against the Catholic church and other Christians who dare to challenge the prevailing opinion,  and the growing gap between rich and poor are all evidence that we are not quite as tolerant and equal as we like to boast.

I can give numerous examples of those who have been discriminated against because they do not share the morals of the current zeitgeist.   The social work student who was told he would be failed if he posted anything on the internet stating he was opposed to same sex marriage, the nurses who were threatened because they opposed abortion and the politician who was told they would be de-selected if they mentioned what they really thought.    Only this week I was on my way to speak at a cafe in a well known supermarket when a phone call came saying that I was to be banned from speaking there because of the companies’ ‘equalities’ policy.  Ironically I was due to be speaking on whether religion causes strife and the role of tolerance and religious freedom.  It appears that some are more equal than others.

It is all very well to boast of tolerance when it is your views that are being ‘tolerated’.  However real toleration is when differing views are allowed.  The evidence is that we are moving towards a more authoritarian intolerant Scotland where anyone who does not accept what our rulers tell us should be tolerated, will not be tolerated.  As the late great Christian philosopher Francis Schaeffer warned decades ago –  ““If we as Christians do not speak out as authoritative governments grow..eventually we or our children will be the enemy of the society and the state.  No truly authoritarian government can tolerate those who have a real absolute by which to judge its arbitrary absolutes”. 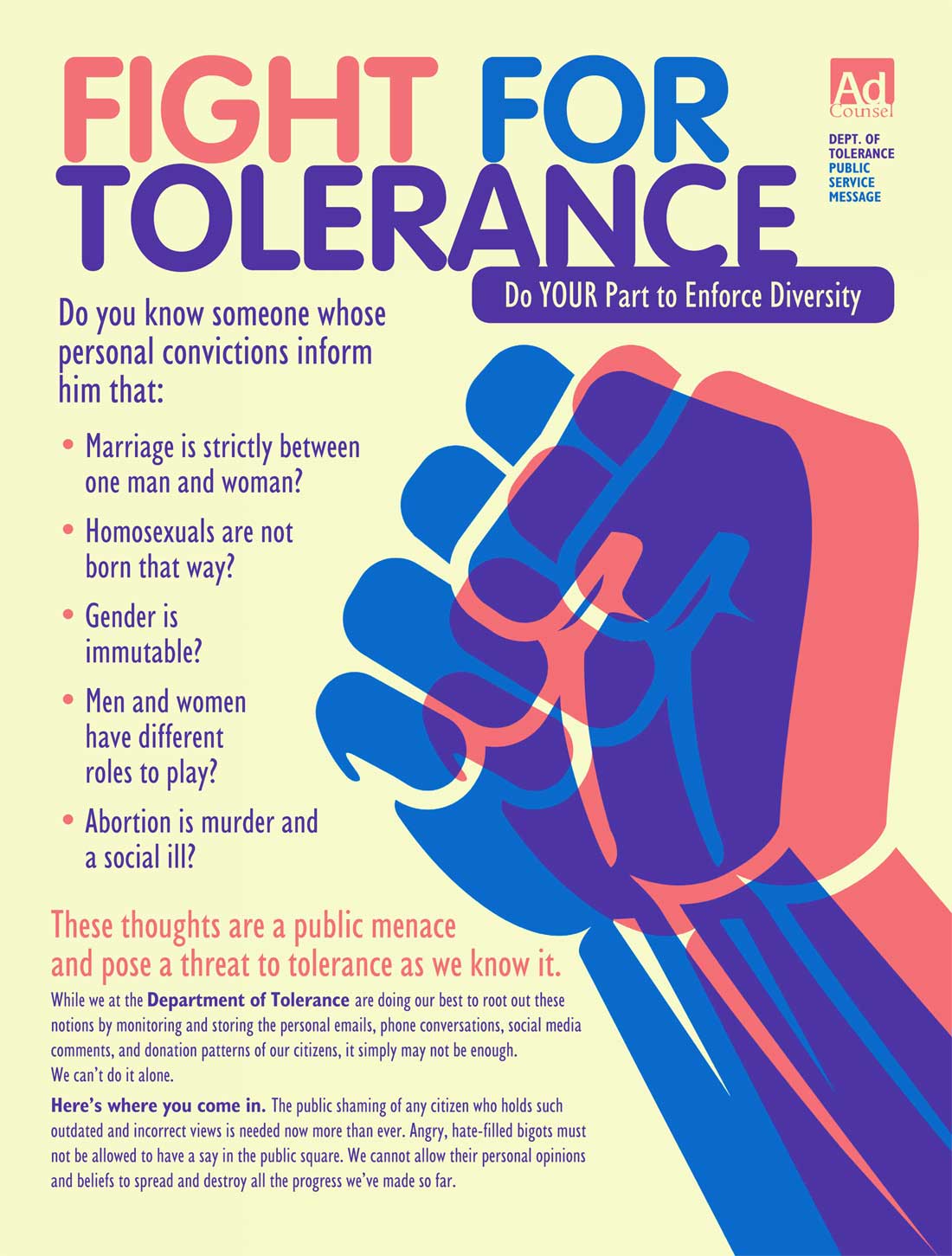