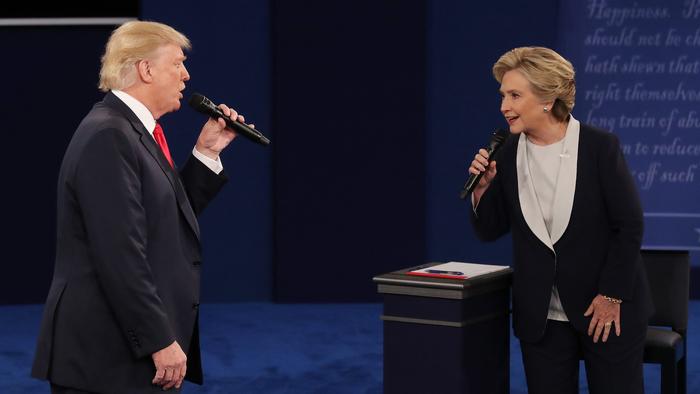 Watching the second Presidential debate (which was anything but ‘presidential’) left me with a feeling of depression, nausea and sorrow for my American friends. With a population of 324,769,696 these are the two candidates to be President?!   It was an ugly debate and it showed the ugly side of both America and humanity.   On the actual debate side Trump was a clear winner, but the bar was set really low, and in this particular contest you cannot help but feel that it is the American people who are the losers.   If we deserve the leaders we get, then what have the American people done to deserve this?!

The Hypocrisy of the Culture

There was uproar after the latest videotapes came out concerning what Trump calls his ‘locker room’ talk eleven years ago. No matter the attempts to explain it away there is little doubt that these tapes show a man who abuses his power to get what he wants and that includes sexually. At best it was crude and offensive, at worst it indicates that the next President of the US could be someone who would normally be regarded as a sexual predator.

There are no excuses. However there is a great deal of hypocrisy in the moral outrage against Mr. Trump.   The trouble is that you can hear and see language (and actions) like that, and indeed far worse than that, every night on US TV and even worse on the Internet. We have created a sexualized culture that is crude and rude, which worships money and power and rejoices in the liberty to do whatever we want. And then we get all outraged when someone who worships money and power does what the media has made the culture to be.    Did the millions of women who bought 50 Shades of Grey not realize what they were buying?   In the UK we have comedians like Frankie Boyle and Jimmy Carr, who in their ever more desperate attempts to show they can be shocking, sink to ever lower depths.   Trump is not an anomaly. He is a product of our dumbed down, sexualized, greedy, reality TV culture.

But the hypocrisy is worse. Because in this Trump at least was right – Bill Clinton was just as bad. He used his position as the most powerful man in the US to get his own way with at least one intern. And he lied about it. Who can forget ‘it depends on what the meaning of the word ‘is’ is?!

Now Hilary Clinton cannot be held responsible for her husband’s actions (any more than Donald Trump can be held responsible for the actions of his model wife – although that still seems to make her fair game in the liberal press), but she does need to disavow them.   Besides which that star of the American left, President Kennedy, was a noted philanderer and adulterer. Perhaps in days gone by these things could be kept hidden but with social media, 24-hour news TV and the Internet there is little chance of that happening today.

Donald Trump is not unique. He is not the anti-Christ. He is not the devil in a very poor disguise. He is what you get if you take the worst of American culture (consumerism, individualism, crudity and instant gratification) and leave out the best (Christianity and its fruits). I have always argued that America without Christianity is a nightmare than none of us would wish to see. In Donald Trump and Hilary Clinton we are getting a foretaste.   In the hit TV series House of Cards we are presented with an amoral, scheming, power hungry politician who uses his power to indulge his appetites. Frank Underwood (brilliantly played by Kevin Spacey) is the rogue/hero Democrat politician. It’s a long way from the West Wing – and going by today’s politicians, it’s a lot more realistic and accurate.

Mind you if this was a House of Cards plot, they would have had Donald Trump running as part of a conspiracy to ensure that one of the most unpopular, manipulative and dishonest politicians in living memory could get elected.   As regards Hilary it astounds me how many politicians, media and educational elites are so quick to condemn Trump but stay silent about Clinton. The hypocrisy is breathtaking.   During the second debate there was a very revealing moment when she cited her ‘friend’ Michelle Obama telling her how to respond to Trump’s attacks – ‘when they go low, you go high’, before then going on to engage in a series of personal attacks. In the world of US politics today it appears that ‘high’ is pretty low.

A world in which either Trump or Clinton is President is for me a sure sign of the judgment of God.

Speaking of which – lets turn to the Church – which has bravely stood apart from the culture and shone the bright light of the Gospel on the whole dark charade. I wish!

Hypocrisy of the Church

When it looked as though Trump was going to be elected there were those of us on this side of the pond, as well as in the US, whose immediate reaction was ‘oh no…not only will he be a disaster for the US, but he will be a disaster for the Church – even here’. Why?   Because we figured that there would be ‘evangelicals’ who would come out in support of Trump as the least worst option and that he would inevitably be portrayed as the ‘Christian’ candidate. And so it proved to be.

There were a string of evangelical endorsements – such as this by James Patrick Riley who called those Christians who disagree with Trump, Pharisees and who declared “this Fall Jesus is a Republican.” In the eyes of the American Right – whenever was he not?! It is this identification of Christianity with right wing politics that has done so much harm and continues to do so (as it does when Christianity is identified with left wing politics).

And then of course in stepped Jerry Falwell to remind us where large sections of the US church went wrong decades ago. To be diverted from the pure paths of the Gospel into the false wilderness of the Moral Majority, was always going to end up with the church becoming a House of Cards, easily blown down, rather than the building of living stones envisaged in the New Testament.

I kind of expected that the Moral Majority folks and some of the Charismatics (God has anointed Donald Trump) would go that route, but I was shocked when Wayne Grudem, and others whom I totally respect came out in favour of Trump. To give a great deal of credit to Wayne, he has admitted he was wrong, but the fact that he could even consider going that route indicates how deep the malaise is. https://www.washingtonpost.com/news/acts-of-faith/wp/2016/10/09/in-a-stunning-reversal-theologian-pulls-back-support-from-donald-trump/

The problem is that evangelicals have believed all the overblown hype about us having tens of millions of voters and the subsequent power that goes along with that. But this is not how the Kingdom is built. You don’t build the Kingdom of Christ from the top, down; you build it from the bottom, up…with the foundation being Christ and the apostles and prophets. The American church has far too easily given itself over to the gods of the culture, entertainment, money and power (and we are not that far behind!).

But not all. In fact its even questionable as to whether the majority of evangelicals will vote for Trump as Darren Patrick Guerra argued on First Things – https://www.firstthings.com/blogs/firstthoughts/2016/03/the-myth-of-the-evangelical-trump-voters

And thankfully there have been stand out evangelical leaders such as Al Mohler President of the Southern Baptist Seminary whose articles and podcasts have been a consistent beacon of Christian sanity in the midst of the mess. His summary of the second debate as “an embarrassing night for American democracy” was spot on.

Here is my problem. American Christians can vote for whoever they want, and they can argue for whoever they want, but all we would ask is please don’t identify your politics with Jesus Christ.   They are political not theological views. Over here we had a vote on leaving the EU. From a personal, political and social point of view I was on the Leave side and argued for it publicly. But I would never preach that, and I would never say this is how a Christian should vote. People have to work things out for themselves. My job is to teach the Bible and the Bible says nothing about many political issues. It does however say a great deal about associating the Gospel with people who lie, commit adultery and are misogynistic racists!

But I really do feel for my American brothers and sisters. Who can they vote for? I don’t know, but I found Erik Eriksson’s article in Resurgent to be very helpful.   If I had a vote I would cast a protest one and pray for the Lords mercy to be upon the US – there is no way in good conscience I could vote for either of the main candidates.   http://theresurgent.com/coming-to-terms-with-trump/

If the debate showed us America the ugly we need also to remember America the beautiful. For all its faults the USA is one of the greatest and best nations that has ever been on this earth. She has been a place of refuge for refugees. She has offered new hope and new life to many from all over the world. She has developed an accountable and workable system of democracy and been a defender of democratic and properly liberal values for many years. She has been a defender of religious freedom for all of her life. Our world is a lot richer in every way for having America in it.   I love American music, culture and history.   The American people have much to be proud of and much to be thankful for.  I am deeply thankful for America.

We must pray that America’s beauty will be renewed.   The idols of money, power, entertainment and sex are creating a profound ugliness of which Donald Trump and Hilary Clinton are only the symptoms, not the causes. If America gives up her Christian heritage then what we saw during that debate is only a taste of the evil, hatred and darkness that is to come.   It may be that the Lord will permit this. If he allowed his own people, Israel, to be sent into exile and to be defeated because he would not permit his glory to be given to another, then why should we think the American church should be any different? All we can do is humble ourselves and cry out ‘O Lord, in wrath, remember mercy!”

May we yet see the day when ‘America the Beautiful’ can be sung and be true!

O beautiful for spacious skies,
For amber waves of grain,
For purple mountain majesties
Above the fruited plain!
America! America! God shed His grace on thee,
And crown thy good with brotherhood
From sea to shining sea!

O beautiful for pilgrim feet,
Whose stern impassion’d stress
A thoroughfare for freedom beat
Across the wilderness!
America! America! God mend thine ev’ry flaw,
Confirm thy soul in self-control,
Thy liberty in law!

O beautiful for heroes proved In liberating strife,
Who more than self their country loved,
And mercy more than life!
America! America! May God thy gold refine
Till all success be nobleness,
And ev’ry gain divine!

O Beautiful for patriot dream
That sees beyond the years
Thine alabaster cities gleam,
Undimmed by human tears!
America! America! God shed His grace on thee,
And crown thy good with brotherhood
From sea to shining sea!