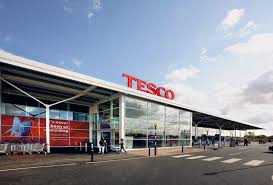 I was looking forward to the gig; a Solas talk and discussion in a somewhat unusual venue – the cafe in Tesco’s main store, Coatbridge.  According to the organisers the Tesco staff had been brilliant – welcoming and very helpful, even opening the cafe especially for the event.  ‘Good for them’,  I thought, ‘here is a big corporation who are prepared to have community engagement, maybe I was wrong about Tesco’s’.   The cafe had been booked for two months, all the publicity done and things were looking good.

I was enjoying the drive down with my new Director, Dr Andy Bannister, until we got just past the Stirling services when we got a phone call from the organisers.  ‘Sorry – we’ve had a nightmare afternoon, Tescos have pulled the plug and we’re having to rearrange the meeting to the church’.   It was too late to cancel, so that meant coffee and food had to be quickly arranged, as many people informed as possible, and stewards sent to the Tesco store to re-direct people.

Why did Tesco pull the plug at the last minute?  It was not local – the local cafe manager was superb.  The first phone call said it was something to do with ‘equality’.  The next one from some higher up manager, who refused to give anything other than his first name, gave a variety of excuses

It’s a rally – no its not its a lecture with a question and answer session which is open to anyone.  It’s not a political party, religious service or a rally.

We don’t know the numbers – Neither do we…thats the point of an open meeting.  Do you ever know the numbers that will come to your store or cafe before you open it?  I guess when its full you don’t keep packing people in.  Why would this be any different?

We don’t know the content – Yes you do.  Its a talk on whether religion is the cause of strife in society and a question and answer session that follows from that.

It does not fit Tesco’s ‘values’ –   Ah – now we get to the real heart of the matter.  What are these Tesco values which prevent free speech and an open discussion on a subject which is important to the wider community?  Tesco post about their values (read about them Here) – its full of corporate newspeak which is meaningless without actions.  By their fruit you shall know them!

Understanding people – customers, colleagues, communities – and what matters to them, and then trying to make those things better, is at the heart of Tesco

If Tesco’s corporate manager ‘Scott’ was just imposing his own values,  and discriminating on the basis of them, then his bosses should deal with him.  If on the other hand Scott was just reflecting ‘Tesco Values’ then Tesco need to change their values.   Given that there was a great deal of interest in this subject in the local community, and that it matters to many people, how does banning a talk at the last minute fit these values?  What about the inconvenience and expense for all those involved?  It was a subject of great interest to the local community (the church we moved to was packed with around 100 people from a variety of backgrounds).  It was not political, it was not a religious worship meeting (there was no open prayer, or religious worship), it was not an attack upon any particular group.  It was not discriminatory – it was open to all and sundry.  So what was the problem?

It could be that manager Scott just happened to come across this on the afternoon it was supposed to happen and realised that it was against Tesco’s health and safety policy and reluctantly felt obliged to enforce it.  But it is much more likely that Scott or someone above him got a phone call/e-mail from a militant secularist who had heard of the event through the leaflets being handed out, or through the internet.  ‘How dare Tesco have this noted ‘hom0phobe/extremist religious group/any other discriminatory name you can think of’ speak in their premises?   Therefore in the name of free speech you must stop this talk .  In the name of diversity you must prevent this difference.  In the name of tolerance you must not tolerate these people.’  And the corporates jump – because the newspeak and authoritarianism of the  cultural elites suit the materialism and ‘values’  of the corporates.  This is how modern intimidation, intolerance and bullying works.

Since we first introduced our Tesco Values more than a decade ago, they have become a vital part of our culture – and an essential underpinning of our growth and success.

I would like to ask Tesco ‘what are your values?’.   Is it part of your ‘culture’ to ban Christian community groups?  Do you support the discrimination and bigotry demonstrated by your manager?’   If so then it is little wonder that your ‘growth and success’ has been negative in the UK for the past years.

You may have banned us, but there is hope.    We had a great meeting last night in Hope Church.  Around 100 people listened, discussed and debated.  Pantheists, atheists and Christians from many different backgrounds.  You could have had them.  You could have connected with your local community.  Instead you have alienated all of us.  And through the power of social media you will find that you may have alienated a whole lot more.   Your local staff were superb – why not do something radical and grant them some autonomy and stop imposing corporate ‘values’ from on high?   And why not apologise to the organisers and permit them to hold their next community discussion meetings in your ‘community’ cafe?   We are open to discuss with you…are you?

Looking forward to the next meeting…!

To those in Britain who are not Christian and yet value freedom, remember that religious freedom is the foundation of all other freedoms.
And to those who think that they can shut the Church up and prevent us from proclaiming the values of Christ. Let Jesus have the final word –  “I will build my church and the gates of hell will not prevail against it’.

Here is an interview I did on this and Tesco’s response:

Prior to the gathering taking place, we had agreed a small number of members from the group could meet in our Stirling store.

“When we discovered the group was encouraging a larger, open meeting, we suggested they find a bigger venue to accommodate them.”

You will note that someone in Tesco is lying.  First of all they can’t even get the store right – it was Coatbridge not Stirling.   Thats a mistake – but someone is lying.  We were told it was something to do with ‘equalities’ and Tesco’s values…we were not told that we should get a bigger venue to accomodate.  The Tesco cafe was more than big enough to accomodate the people who were coming.   And why did they cancel at the last minute?  They knew that it was a public meeting – not a private group.   I would love to know the truth of what happened….