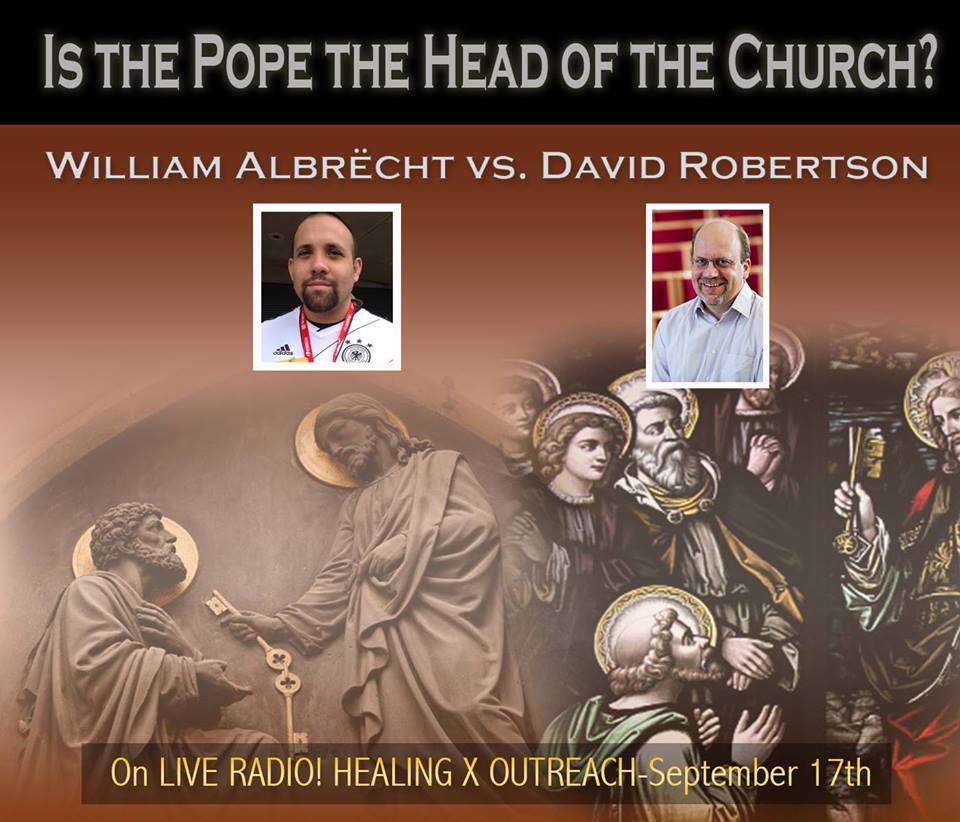 Last Saturday I had the privilege of doing a debate on this subject, moderated by Agustin Astacio, with William Albrecht, a Roman Catholic apologist from an organisation called the Catholic Legate.  To be honest I wasn’t all that keen to do it.  I have no time for anti-Catholic polemic and the debate topic seemed almost nonsensical.  Jesus Christ is the head of the Church, end of.   I wasn’t sure I would have much more to say.

I don’t believe the Pope is the anti-Christ, although there have been popes who are anti-Christian (as there have been Protestant leaders), and I havn’t looked at this subject for a long time.  But I did a bit of research and I enjoyed the novel experience of listening to an intelligent, well-educated, sincere Catholic apologist defend the indefensible.   At times it was exasperating and a bit nit-picking…and I suspect you can hear my frustration occasionally.  If you want to listen to the whole debate you can get it here.  I’m not a big fan of the formal debate format because it too often leads to point scoring and prefer a conversation (I’m so post-modern!), but it was informative to hear William’s point of view.

The Catholic catechism teaches: “The Roman Pontiff, by reason of his office as Vicar of Christ, and as pastor of the entire Church has full, supreme and universal power over the whole Church, a power which he can always exercise unhindered.”  (1994 Catechism of the Catholic Church).    As we say in Scotland, no way Hose!   It is a ridiculous claim, at best biblically and historically untenable, at worst blasphemous and wide open to abuse.

I would make the following observations – which do not claim to be an exhaustive case – just observations of an interested observer!

2) It is clear from the New Testament that the pillars of the early church were James, Peter and John (Galatians 2:9) and Paul.  There is no indication in the New Testament at all of Peter as holding a papal office.   In order to defend this scripturally Catholic apologists have to engage in eisegesis rather than exegesis.  They read back from their doctrine of the Pope into scripture, rather than taking the doctrine from Scripture.  So for example William got really hung up about Acts 15 and the Council in Jerusalem where it says in v.7 that Peter stood up and addressed the council.  William read this as meaning that they were debating until Peter stood up and spoke and then the debate was over because he was the Pope.  But the text does not say that, nor hint at it, and it cannot be worked out by ‘good and necessary consequence’.    After Peter stood up and spoke, Paul and Barnabas and probably others spoke in the council, and then James delivered the authoritative pronouncement v.19 “It is my judgement therefore..”  If this text proves that anyone was Pope, it was James!

3) If Peter was Pope why do his two letters (1 and 2 Peter) and his gospel (Mark) not refer to that?  Instead he declares himself to be a ‘fellow elder’.   In his letters it is clear that he regards leadership, even in the local church, as being plural not hierarchical.  That is a basic principle of New Testament ecclesiology.

5) 1 Clement – In this latter respect William seemed quite fixated on the first letter of Clement, an important document from the first half of the second century, supposed to be from Clement, the pastor (bishop?) of the church in Rome.  To Catholics he is known as Pope Clement 1 – although there is no evidence that he took that title or was known by it in his lifetime.   In it he urges the church to recognise the apostolic authority of their leaders.  William took this as meaning that he was saying he was the pope, which is a classic case of putting two and two together and making fifty!   Again without wanting to sound arrogant I would make exactly the same claim as a minister of the Word – I hope I don’t preach my own opinions, I teach the Word of God, and do so with the authority given me by that Word.  I don’t need a Pope to tell me the doctrine when I have the Word.    This is not to say that church tradition, councils, scholarly opinion are irrelevant, but they are always subservient to the ultimate authority of the Word.

6) I love the early Church Fathers.  I read them every day and benefit enormously from them.   But I also love the fact that I have the freedom to disagree with them and I am not bound by trying to square the circles that sometimes they make.  I do not judge the Scriptures by the Church Fathers, I judge the Fathers by the Scriptures.

7) From a historical point of view it is clear that the primacy of the Roman Bishop was something that came about because of the political situation and was not firmly established until after the conversion of Constantine.  Thus the titles given to the Pope often have more to do with the Roman Imperial system than they do with the New Testament Church. “Supreme Pontiff of the Universal Church’ for example is an imperial title which the Roman Bishops took to themselves.  They are the Pontifex Maximus – the greatest Pontiff.   That really does not sit well with the humility of ‘let no man call you father’, does it?!

8) The more I read about this the more I realise that the Papal office has historically  (and even today) been as much a political as a religious one, and that that connection has done a great deal of harm.   The actions of the papacy in the Dark and Middle Ages has brought great disgrace on the church and shame on the Gospel.  I found it fascinating that William was prepared to defend the Crusades, ordered by the Pope. Even today the Pope is a Head of State, the Vatican.    The equating of the Gospel with a particular politics has never worked well.  Civil and Ecclesiastical power mixed together are a potent and dangerous mix.

9) William was unable to face up to the consequences of the Pope being head of the Church.  If that were true then those of us who do not recognise his headship are anathema and cannot really be considered Christians, followers of Christ, because we are refusing to follow his representative, the ‘vicar’ of Christ – The one in the place of Christ. I know that modern Catholics don’t believe or practice that, but it is the logical outworking of the doctrine of Papal headship.

10) A two-headed Church?  Finally William began rightly by pointing out that Jesus is head of the Church.  That should have been the debate over.  We were agreed.  But then he added that the Pope was head too, albeit a lesser one.   To me this leads to the obvious conclusion – a two-headed body is a deformed body.   There can be only one head.  Christ is ‘the head of the church, his body, of which he is the Saviour” (Ephesians 6:23 b).

I want to say to my Catholic friends – please don’t take offence at the above.  I have a great deal of love and affection for many in the Catholic church and agree with much of its teaching.  But I’m sorry brothers and sisters, on this one the Catholic church has made a major error.  We follow Jesus not the Pope…and yes I know that you would say that you follow Jesus and because of that you acknowledge the Pope as head of the church, but that just doesn’t make any sense to me.  Sorry.   You are of course still welcome in St Peters…and to discuss any of this with me. Feel free to correct your errant brother!

And to my anti-Catholic friends who call me a Papist loving anti-Reformer.  You are half right.  I am a Papist loving Reformer.   Of course I love Catholics.  And I learn a great deal from Catholic theology and find a great deal in common with Catholic social teaching and regard Catholics who believe in and follow Christ as my Christian brothers and sisters.  And I will even quote a Pope when I find what he says to be biblical and helpful.  Just as I am not bound to accept everything that the Church Fathers say as authoritative, neither am I bound to declare every Pope evil or everything they say heretical!   Get over it.  Lets fight heresy whereever we find it – whether in Protestant or Catholic churches – but especially in our own hearts and minds.

If you want a simple but excellent primer on this subject then I would highly recommend Leonardo De Chirico’s excellent wee book published by Christian Focus – A Christian’s Pocket Guide to Papacy.