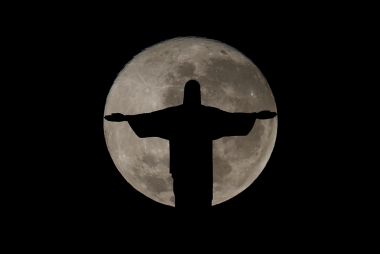 I am delighted that the series on Revelation Christianity Today asked me to do has gone down so well.  The articles that are usually the most popular are those that have testimony, sex, controversy and those of the ‘five ways to be a biblical pet owner genre’!  So whilst I really enjoy writing these and think that Revelation is the best biblical book for the church understanding the world today as Ecclesiastes is the best biblical book for post-modern evangelism, it has still come as a pleasant surprise to see that these articles are being read!  You can read the original part two Here

It is one of the world’s most iconic images. Anyone attending the Olympics and visiting Rio in Brazil, cannot miss it. Built in 1931, designed by the Brazilian engineer Heitor da Silva Costa and the French sculptor Paul Landowski, the art deco sculpture of Christ the Redeemer overlooks the city of Rio de Janeiro with outstretched arms. It’s an impressive sight. And for many people that’s all that Jesus is – a statue. A long dead teacher whose teachings live on in much of the collective ethics of humanity. Jesus is cool, and dead, although his followers who are very much alive, leave a lot to be desired!

The reality that the Revelation of John reveals is something very different. He makes a spectacular claim, which if true, changes the whole world. There are many claims that don’t really matter – even if they are extraordinary. There may or may not be a monster in Loch Ness, but it’s not going to change or affect your life in any real way if there is. But this claim is different. It’s the one claim that turns the universe upside down. It is the ultimate game changer.

In response to Christopher Hitchens’ God is not Great, I wrote Magnificent Obsession, trying to explain why Jesus is great. After it was published an atheist friend came round to the house and wanted to talk about it. “Extraordinary”, she said, “I can’t believe that you actually believe that”. I was curious as to which of the facts about Jesus she was so nonplussed about. “You really believe that Jesus is alive today! If that were true it would change absolutely everything”. She was spot on. In fact an atheist who is incredulous at the Resurrection of Christ often has a better understanding than a nominal Christian who repeats the creed without being astounded by it.

On the third day he rose again.
He ascended into heaven,
and is seated at the right hand of the Father.
He will come again to judge the living and the dead.

This is what John teaches in Revelation 1:4-18. It is a foundational doctrine of the Christian church. It is the message that the Apostles took everywhere in the book of Acts. It is the ultimate apologetic. Jesus is alive. If you can read/say these words without a sense of awe and wonder, then you haven’t really got them.

But here is the real problem. It’s not enough that we know and assent to something intellectually, doctrinally. We need to know. We need to experience. We need to feel. Jesus is not just a Facebook friend. He is the friend who sticks closer than a brother. In the words of the song –

Turn your eyes upon Jesus,

Look full in his wonderful face;

And the things of earth will grow strangely dim

In the light of his glory and grace.

But how? How do I look full in his wonderful face? To put it bluntly, his face is not here. We don’t have a photo. We don’t even know what he looked like! It is interesting that there is no description of Jesus in the Bible.

We need the real presence of Christ. In Scots we have a phrase, ‘it’s better felt than telt’. But how does Christ reveal himself? How can we know? How can we feel? Although the felt presence of Christ is something we want, the problem is how we get there. What happened to John in this first chapter of Revelation gives us some pointers.

In the Spirit on the Lord’s Day

John was as he tells us, on the island of Patmos, suffering, enduring, wondering what was going on, what was happening in the world and church and to him. And then this extraordinary thing happened. On the first day of the week, he was ‘in the Spirit’. There is a pointer straightaway. If you want to see Christ you need both his day and his Spirit. The Lord’s Day is the first day of the week. For the Christian church it replaced the Jewish Sabbath (the Saturday) and became the day of rest, re-creation and public worship. One of the problems that we have as Christians today is that we have lost the fourth commandment and we have forgotten that the Sabbath was made for man, not vice versa. It is a day that God gives us to seek him. I know that there are many self-proclaimed supersaints for whom ‘every day is the Lord’s Day’, but for us lesser mortals it’s great to have one day in the week as a ‘holy day’, where collectively with his people we are ‘in the Spirit’.  In the Spirit on the Lord’s Day – A Rainbow over St Peters

We need a vision of Christ. We don’t know what Jesus looked like and this does not give us a description. John saw a man in a robe and a golden sash, with hair white as wool/snow, eyes like blazing fire, feet like burnished bronze, a voice like the sound of rushing waters, having the seven stars in his right hand, a sharp double-edged sword coming out of his mouth and his face shining like the sun. This is not a photofit picture of Christ. Like much of Revelation it is a vision, which is meant to tell us what Christ is like, not what he looks like.

And here is another key to understanding the whole book. You need to know the Old Testament. Daniel 7 and 10, Ezekiel 43 and Isaiah 6 will help you with these verses. There is hardly a verse in the book of Revelation that is not linked directly or indirectly with parts of the Old Testament. It is a basic principle of understanding the Bible; interpret Scripture with Scripture – which you can’t do if you don’t know Scripture.

The point about John’s vision of Christ is that its purpose is to reveal the glory of Christ, who is the glory of God. Hebrews 1:3: ‘The Son is the radiance of God’s glory and the exact representation of his being.’ But this does not have the effect of making us come over all warm and fuzzy. It is stunning. John, whose knowledge of Christ as his best friend on this earth was second to none, was overwhelmed by this revelation. The fear of the Lord is the beginning of wisdom. ‘Awesome’ is one of those awesome words which the devil has killed by overuse. As I write I have just been sent an e-mail promising me ‘awesome’ deals. These ‘deals’ may be as irritating as the people who constantly say ‘awesome’. Chocolate chip ice cream is not ‘awesome’. You are not ‘awesome’. Christ alone is awesome. He alone inspires the kind of awe that makes us fall at his feet as though dead.

And then he places his right hand on us. And he speaks. Don’t be afraid. I am the First and the Last. I am the Living One. I was dead, and now look, I am alive forever and ever, and I hold the keys of death and Hades.

Sometimes we think that if only we could have been around with Jesus when he was teaching, raising the dead, healing the sick, casting out demons, it would have been so much easier to have faith and to know him. And yet you can be with someone and not know them. John had a far greater revelation of Jesus on the island of Patmos, than he did on the shores of Galilee. We can too. The living Christ speaking to our hearts is the most awesome thing on earth. Far too many of us behave as though Christ were dead and we are the living ones – whereas if we experienced the living Christ we would realise how dead we are and how He is eternal Life.

John had a far greater revelation of Jesus on the island of Patmos, than he did on the shores of Galilee.

There is a somewhat clichéd and ultimately superficial view of Christianity that thinks that once we are ‘born again’, have made a commitment, we now know Christ and there is nothing more to know. We speak so glibly. “I came to know Jesus” – as though it were merely an experience in the past, which sadly for many it is. But not for the Apostle Paul who towards the end of his life wrote ‘I want to know Christ—yes, to know the power of his Resurrection and participation in his sufferings, becoming like him in his death, and so, somehow, attaining to the Resurrection from the dead’. (Philippians 3:10-11). He had planted many of the churches in the world, written a great deal of the New Testament and yet still at the end of his life, he wants to know Christ!

A living Christ is so much better than even the most wonderful 90ft statue. It’s time to resurrect the teaching about the Resurrection. If Christ is alive; if Christ holds the keys of death and Hades, then what does John, or any of us have to be afraid of?

Those of us who follow him; who worship him and acknowledge him in this life, have nothing to fear. We are loved, freed, forgiven and guaranteed our own resurrection. We only have our lives to live here on this earth in wonder, love and praise. Awesome!

The Day of Judgement

But for those who don’t know or acknowledge him, there is a real problem (and opportunity). The problem is that shutting your eyes to Christ does not mean that he does not exist or that he will go away. The existence of Christ is not dependent on your belief or lack thereof. John tells us that Jesus is coming with the clouds and every eye will see him, even those who pierced him; and all peoples will mourn on earth because of him. When Christ returns there will be no atheists demanding proof of his existence! Every knee will bow. That is the day of judgement.

The Day of Salvation

The opportunity? That’s now. This is the day when Christ is calling people from all over the world to new life and giving them the right to become the children of God. Jesus never refuses anyone who comes to him. Those who seek him find him. He is there and he is not silent. He gives the Spirit to those who ask. And he never says no. Maybe it’s time you asked? This is the day of salvation.

Part one of this series is here –

You can also get Magnificent Obsession here –

Or from Solas – Solas – books