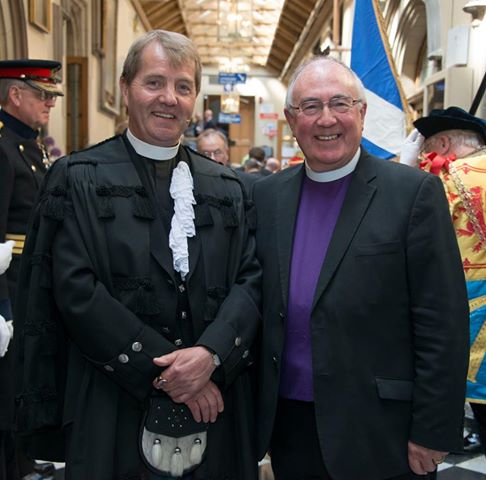 As I prepare for the Free Church Assembly beginning this evening, I have been reflecting on what happened at the Church of Scotland Assembly on Saturday. This from the BBC sums it up well:

The Church of Scotland has voted to allow its gay ministers to marry.

The General Assembly meeting in Edinburgh voted 339 votes to 215 to update church law to bring it in line with secular Scottish law. The church already recognised ministers and deacons in same-sex civil partnerships and has today extended that to cover same-sex marriage.

The Church said in a statement immediately after the vote that the decision “does not compromise the Church’s traditional view of marriage as a union between one man and one woman.”

And it does not mean church ministers will be able to register same-sex civil partnerships or solemnise same-sex marriages themselves.

Speaking after the vote, the Very Rev John Chalmers, principal clerk, said: “We had a debate which made very clear that we were not interfering with our theological definition of marriage and were not going to the place where ministers or deacons could themselves conducting same sex marriages.

“It is an entirely different discussion.”

“Today’s decision means it will be possible for kirk sessions and congregations to depart from the traditional understanding of marriage to call not only potentially a minister in a civil partnership but one who is in a same-sex marriage.”

What does all this mean for the cause of the Gospel in Scotland?

The background to this comes from an article I wrote seven years ago – https://theweeflea.com/2016/05/22/back-to-the-future-the-2009-general-assembly/

So here are the lessons and logical conclusions:

Evangelicals have no hope of reversing the situation. Now that the Kirk has decided it is no longer governed by Christ through his Word, the Establishment will resort to the type of underhand politics, spin and macro management that I have witnessed this past year and which was once again evident on Saturday. The Moderator wanted to get it over with ASAP and so the debate was curtailed. Evangelicals will keep being played with the carrot and stick approach. They will be insulted and praised in the same breath. As long as they play the game they will be allowed a seat at the table – on the condition that they keep other evangelicals in line and don’t rock the boat.

And there is no chance of evangelicals rocking the boat…there will be a bit of shouting and murmurs of rebellion, but given what has already happened the Establishment know they are home and dry. Their tactics have paid off and largely because evangelicals were weak, disorganized, nice, divided, and at the end of the day not prepared to fight, they have lost what should have been a no-brainer.   I had hoped that when the Scott McKenna debate came up, the evangelicals would have picked up the baton and continued the fight for the gospel – but not a word in public, and in private, instead of taking on the aberration of Scott’s anti-Christian teaching, some moaned about me doing it and accused me of being anti-C of S because I challenged a C of S minister to uphold C of S standards! And Mr. McKenna has been rewarded with a regular column in Life and Work. Whither Evangelicals now?

Let me finish with some reflections on Angus’s final sermon which was like the curates egg: It had some good stuff in it, but overall ended up being really frustrating because it shows both how close and how far, Establishment evangelicals within the C of S are.
Speaking from 1 Peter Angus argued for three excellent things.

The Assembly sang To God be the Glory after Angus’s sermon. It contains the wonderful line ‘Who yielded his life an atonement for sin’? Is that what the C of S believes? Does it believe it in the same way that it believes that marriage should be between a man and a woman, unless you happen to be a minister with an exemption?

“Keep focus on Jesus himself, the only foundation of the church and the pioneer and perfecto of our faith.   Our agenda in every respect must be his (Augustine). “