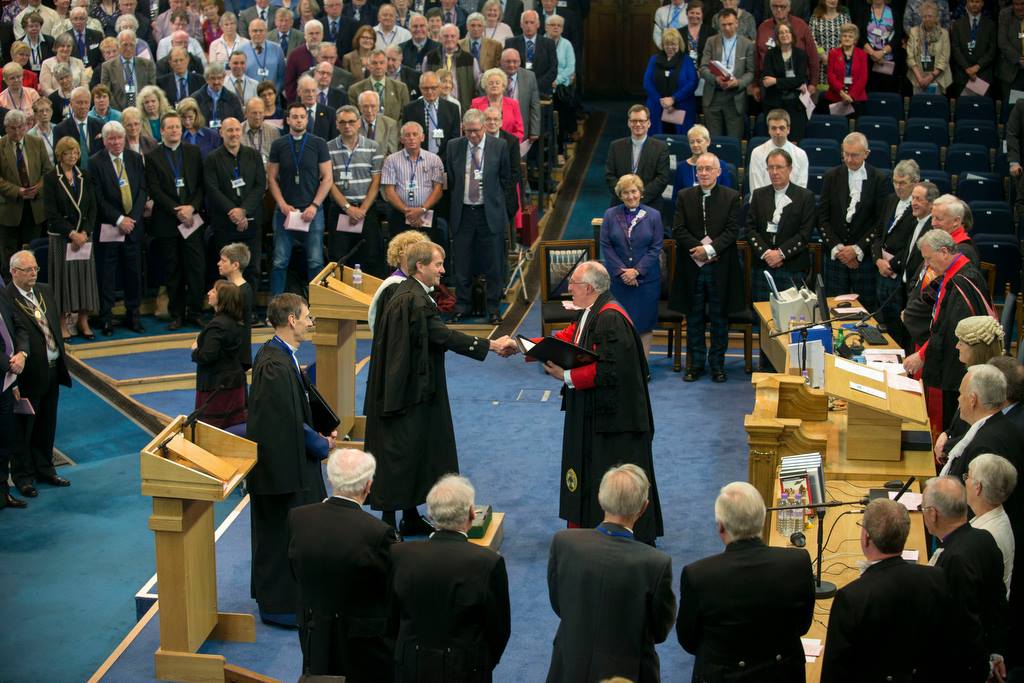 In 2009 I was the editor of The Record.  As such I wrote a commentary on the Church of Scotland General Assembly of that year in which I argued that it was the beginning of the end for the C of S.  I doubt that there is an article that I have received a stronger backlash to -especially from some evangelicals who thought it was way too pessimistic, out of touch and not recognising what they were doing to take over the Kirk.  Even some within the Free Church thought I had gone too far.  People wrote of how they had been ‘hurt’ and how I just did not understand, that I was being denominational and just plain wrong.   Much as it would have been humbling (not a bad thing!) to have been wrong, I had hoped that I would have been proved to be wrong.  But yesterdays events show different.  They are the fruits of the ‘trajectory’ set in 2009 and the tactics adopted by evangelicals then.   As I watched the 2016 GA yesterday that article came to mind.   I will write something about yesterdays disastrous proceedings tomorrow, but in a sense I feel I almost don’t need to.  The article from seven years ago almost says it all.    How things have changed in both the Church of Scotland and the Free Church since then – and indeed in Scottish society!   Anyway the following is from August 2009.   Deja Vu….

Ichabod – The Glory has Departed

The history of the Church in Scotland is full of ups and downs. The Romans, the Celtic Church, the darkness of the Pre-Reformation period, the Scottish Reformation, the Covenanters, and the Disruption are all indicative of that. Most of us have been proud of the effect that the Gospel has had in this small country on the North West tip of Europe, and the impact that Scots have thus had upon the wider world. There was something glorious about what God did in making this small nation become ‘the People of the Book’. No longer. Ichabod – the Glory has departed. Over a century of theological liberalism being taught in and through our churches has finally come home to roost. If anyone doubted how sick the Church in Scotland has become then the recent events in the Church of Scotland General Assembly have provided more than enough proof.

What happened? On Saturday May 23rd the General Assembly voted to approve the induction of the Rev Scott Rennie to Queens Cross Church in Aberdeen – even though Mr Rennie is living with his male partner. In terms of logic, reason and Scripture the debate was overwhelmingly won by those who sought to be faithful to the Scriptures. But logic, reason and Scripture were trounced by emotion, illogic, church politics, political correctness and sheer cowardice (there were over 250 abstentions).

It got worse.   On Monday the Assembly dealt with a petition from the Presbytery of Skye and Lochcarron which called for those who are ordained as ministers to be faithful in biblical marriage and to abstain from sexual conduct outwith. It beggars belief that such a motion would even have to be voted on but through the machinations of the liberal establishment, aided and abeted by those who claim to be ‘evangelical’, the motion had to be withdrawn. The Acting Principal Clerk behaved in an appalling manner – allowing a motion which was opposed to the Skye petition to be treated separately and then, when it was passed, insisting that the Skye petition could not mention homosexuality. Rev Ivor MacDonald was hungout to dry and compelled to withdraw.   Dr John McPakes’ and Rev Angus Morrison’s motion set up a two year commission and ordered all office bearers to be silent in public about the issue. An amendment from Rev Jim Stewart means that no further ‘gay’ ordinations should take place during this period. The whole thing was a shambles.

To hear a post-modern post Free Presbyterian tell the assembly that there “is great diversity of opinion on issues of human sexuality…but greater is our unity in Christ” was breathtakingly depressing. Mr Morrison went on to say “The commission is to uncover and discover this unity we have in Christ”. How do you have unity in Christ if you ignore the Word of Christ?

The proposal from Dr McPake and Rev Angus Morrison is not of course about ‘finding the truth’ or ‘discerning what the Scriptures have to say’. It is simply about damage limitation and trying to ensure that the evangelicals stay in and do not stop providing money for the rest of the Church. No one seriously believes that the 2011 Assembly is going to undo the 2009 Assembly.

The seriousness of what occurred on Monday is underlined by the reason the Aberdeen Presbytery gave for supporting an active homosexual ministry. The Presbytery stated in their reasons –

“The ‘Word of God’ is not synonymous with the Scriptures, but it can, in part, be discerned from the Scriptures through prayer and through the inspiration of the Holy Spirit.”

The Assembly accepted this. It is now the official doctrine of the Church of Scotland that the Bible is not the Word of God but only contains the Word of God. How then do we know which parts of the Bible are the ‘Word of God’? Through inspiration of the Holy Spirit. Does this mean that the Church of Scotland has gone all charismatic? No. This is a return to the pre-reformation Catholic church where the church determines what God is saying. The commission of nine is nothing less than a new magisterium. Presbyteries are only to be ‘consulted’ because they cannot be trusted. After all did Presbyteries not vote 36-9 against the idea of civil partnerships in 2007? Meanwhile the courts of the Church are ordered to be silent and not to discuss the matter. We have moved from the liberty of the Word of God (which is the Bible) to the tyranny of the magisterium.

And if you thought that Monday was the lowest – think again. On Tuesday the Assembly plumbed new depths. Rev Peter McDonald the new leader of the Iona community regaled the assembly with accounts of his pre-marital sexual activities.   This would have been bad enough, but not only was there not a word from the Moderator (who at the very least should have pointed out how inappropriate such language was) but there was lots of laughter and joking. At least one commissioner had to remove himself from the Assembly and be physically sick. A good friend walked out in disgust. Another commented

“I can hardly believe that fornication is being celebrated in the Assembly”. As one minister bravely pointed out to the Assembly – he would have been ashamed if any of his four daughters had been present. Was this really the same Assembly which Dr McPake boasted “we have redeemed ourselves by our dignity”?

So where are we? The Church of Scotland has declared that the Bible is not the Word of God, that active homosexuality is no bar to the ministry, that a magisterium is to be set up to determine what the Word of God is, and crowns it all by an unchecked stomach churning display of mockery and faux repentance. A rubicon has been crossed and there is no turning back.

In an irony beyond ironies, Alec Salmond addressed the Assembly and spoke about how the political institutions of the country were lacking in moral leadership. Was he really suggesting that such moral guidance would come from this Assembly?

I heard a Church of Scotland minister citing 2 Peter 2 as relevant to the situation. He was right. “But there were also false prophets among the people, just as there will be false teachers among you. They will secretly introduce destructive heresies, even denying the sovereign Lord who bought them – bringing swift destruction upon themselves. Many will follow their shameful ways and will bring the way of truth into disrepute. “ 2 Peter 2:1-2

Where do we go from here? There was much speculation in the press about another split in the Church, and there have been murmurings from some quarters. But anyone with any real knowledge of the Church in Scotland knows that that is not going to happen. Why? For the following reasons:

So most evangelicals will bite the bullet and stay. Some will act as virtual Independents as far as the Presbyterian system will allow them to (and this will be a lot harder than in the Anglican church), others are happy just to wear the badge evangelical but in reality only consider it to be one shade in a multi-coloured Church, still others will form organizations in the hope of both retaining their own people and ultimately reforming the Church.   In this latter respect it is good to see men like Willie Philip and Peter Dickson and others, putting their money where their mouth is, forming the Fellowship of Confessing Churches and seeking to actually do something.   And there are those who will drift away. Some ministers will go to other churches, some will get out of the country and many members will look for alternatives. It is the real politik of this latter fact that means that the energy of many evangelicals will be taken up in trying to persuade Christians to remain within the Church. Whatever happens, barring an extraordinary outpouring of the Holy Spirit, the Church of Scotland is crippled and dying and will find itself increasingly unable to bring the Living Water of Jesus Christ to a thirsty nation.

What about the Free Church? What should our response be?

We have to respond. This is the most significant event in the history of the Church in Scotland since the union of 1929. It affects us all. Again we simply list some suggestions.

These are dark days and the worst is yet to come. But these are also days of great opportunity for the light of the Gospel to shine all the more brightly. Evangelicals must not back down from the stance bravely taken by the Fellowship of Confessing Churches. People are not stupid and they will smell a meaningless compromise a mile off. Neither is there any time, space or reason for self-indulgent, self-seeking disunity. We may all have to pay a price. And we should expect to.

Where is the passion of Knox who declared ‘give me Scotland or I die’? Where is the vision of Chalmers when he stated, ‘Who cares for the Free Church compared with the Christian good of Scotland”?

Those who share that passion and vision must unite – across denominations and make a stand to uphold and proclaim the wonderful full gospel of Jesus Christ. Who knows – it may be that these past days have been the shake up that a complacent church in Scotland has needed. May the latter days of the Gospel in Scotland be greater than the former.