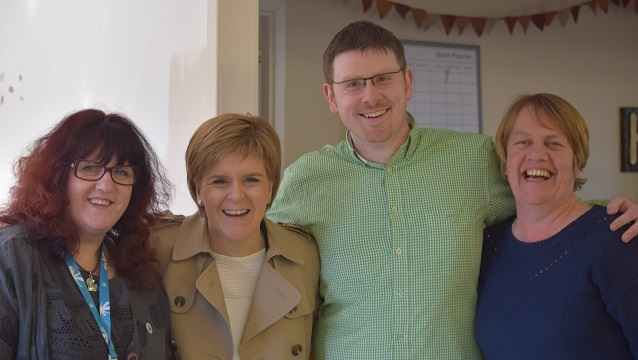 The Scottish Election results are in – and they are fascinating.  I have written to the First Minister to pass on our prayerful good wishes (see the letter below).  The new Scottish Parliament will be made up of 63 SNP MSPs, 31 Conservative MSPs, 24 Labour MSPs, six Green MSPs and five Lib Dem MSPs.

Letter to the First Minister.

I am writing to congratulate you on your re-election as First Minister and your party as the party of government. As Scottish citizens and Christians we pray that your government will bring a period of peace and prosperity for all the people of Scotland. The Free Church of Scotland hopes that our congregations will be able to work with you on issues such as poverty, education and justice.

We were delighted that you were able to visit one of our works, the Milnafua Hall in Alness. Your visit was much appreciated (especially by my sister who helps there!). As a church we seek to serve the whole community and in the words of Jesus to be ‘salt and light’. Unusually in this era of seemingly increasing secularisation and declining churches, we are seeing our church grow and develop. This means that we have resources, especially people, who are committed to the good of the places where God has called them to serve. I wonder if it would be possible to meet with you to discuss areas of mutual concern and co-operation?

In particular I would like to highlight three areas of concern perhaps best summed up in the words equality, diversity and tolerance.

Equality – we are concerned at the number of food banks and what appears to be an increasing gap between rich and poor within society. We appreciate your government’s concern that decent housing, employment and opportunities in education should be provided for all. We are not just concerned for ourselves. We believe that Scotland has many resources and we would like some of these resources to be used to welcome genuine refugees from parts of the world where war has ravaged their lands, and who do not have the same opportunities we have.

Diversity – We are especially concerned about education. As you know it has always been a fundamental belief of the Scottish Church that education is essential for the good of all. Knox’s maxim, ‘where there is a church, there should be a school’, resulted in the Scottish people becoming one of the most educated and literate people in the world. We are concerned that that is changing, and especially that the poor are being denied the opportunities given by a good education. We know that you share that concern and so we would like to discuss with you one part of the solution. We believe that there should be more diversity and choice within education. It is wrong that the only people who get to choose are the wealthy (whether by sending their children to private education or paying the housing premium to live in an area with a ‘good’ school). The one size fits all of modern state education, where social engineering seems more important than education, is not working. We believe that children should be taught ‘how’ to think and not ‘what’. That is why we would like to have the opportunity to re-establish Christian education and have schools based upon Christian principles such as equality, diversity and tolerance. Speaking of which:

Tolerance – We are also concerned at an increasingly intolerant, mocking and authoritarian attitude towards those of us who don’t accept the current moral zeitgeist on whatever happens to be the fashion of the metro-elites. For example, you emphasised in your election campaign a desire to create a ‘third gender’ and to encourage within our schools the view that children can choose their gender. We do not accept this and regard it as a dangerous and harmful position, with the potential to cause a great deal of harm to Scotland’s children. Of course we accept that there are people who feel that they are not the biological sex they were born with, and such people need help and support. But accepting the unscientific philosophy that there are more than two genders, and that gender is fluid and something we choose, is something that is destructive to humanity. I suspect you may not agree, but what disturbs us is the lack of debate on this and other important subjects. We are just told by lobby groups that this is the ‘right’ position and that anyone who opposes it is reactionary, right-wing and regressive. We hope that in the new Scotland, opportunity for debate and discussion will be allowed, so that ordinary people can have a say – even when it disagrees with what the self–appointed ‘experts’ tell us.

Again we pray for you, your government and indeed all our politicians. May the Lord guide, encourage and bless you. I look forward to meeting you.

Rev. David A. Robertson
Moderator of the Free Church of Scotland.