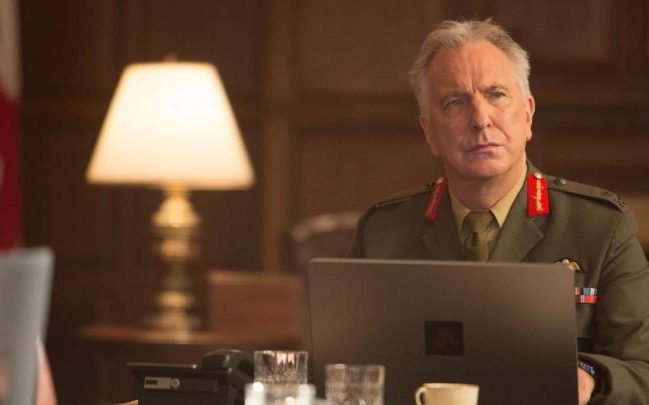 This is a stunning film – albeit with weaknesses.   It examines the morality of modern warfare, in particular people sitting in rooms in London or the US and pushing buttons to kill people in Africa.   One thing I will say about the film is that it is intense from beginning to end and as such time just flies by – I could not believe that it had finished. The hour and forty two minutes seemed like ten.

The film has many plus points.  The acting is superb – especially Helen Mirren as Colonel Katherine Powell, a UK military office in charge of a drone operation to capture terrorists in Kenya.   The late much lamented Alan Rickman (as a somewhat manic military commander)  and Aaron Paul (playing a conflicted American drone operator) are also excellent.

The storyline is intelligent and thoughtful and I think will provoke a great deal of discussion.  It is also very moving.

However there is a downside.  I thought it was all too neat – and a bit too simplistic.  The moral dilemma is set out a bit like the infamous trolley problem.  We only see the personal life and character of the nine year old girl who is ‘in the way’, and not the lifes and characters of the many others who might be killed by the terrorists.   The other problem is that I find it hard to believe that there is such moralistic agonising amongst the politicians, military leaders and drone pilots in real life.  It should be the case, and it would be wonderful if it were – but human sinfulness means that there are those whose ‘consciences are seared as with a hot iron’, who would have no such qualms, and that there are even those who delight in killing.  Which is not to say that there are not those who do not struggle with these issues, I just think the struggles are even more complex than this excellent film portrays.

Anyway highly recommended.   War is not a computer game.  It is for real.  And real people get killed.  God have mercy.