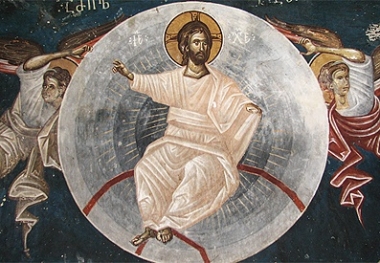 This is my latest apologetics article on Christian Today

It’s the week after Easter.

We repeat the joyous affirmation of faith. “Christ is risen. He is risen indeed.” In St Pete’s as we have some Greeks in our fellowship we always use the Greek version – “Christos Anesti...Alithos Anesti.” But then comes the question: OK, He is Risen. Where is he then? And it’s not just the question of an inquisitive child, it should be a question for every adult and for every Christian.

The Apostles’ Creed tells us – “On the third day he rose again from the dead. He ascended into heaven and sits on the right hand ofGod the Father Almighty. From thence he shall come to judge the quick and the dead.”

So Jesus is in heaven. But where is that and what does it mean he ascended? It’s not just non-Christians who regard this as somewhat fanciful, many Christians struggle with this idea. Is the idea that Jesus was on earth and then went up into the heavens like a spaceman? Is this not something that clearly belongs to a past where they believed in a three-tiered universe – heaven above, hell below and earth in the middle? Are we not so much wiser now?

This question is all the more important to our non-Christian friends because Christians talk about knowing Christ, having a personal relationship with Jesus, talking to Christ, and wanting to introduce them to Jesus. Unless this is just spiritual code or mumbo jumbo we need to be able to say what it means. Surely it requires a real Jesus, with a real presence and not just ‘Jesus living in my heart’ (as a child that always made me think about some weird John Malkovich-style body!)

The key to this is the biblical teaching about the Ascension. I have been enormously helped in thinking about this by my book of the week this week, Gerrit Scott Dawson’s Jesus Ascended – the Meaning of Christ’s Continuing Incarnation. I have unashamedly relied on it for much of what follows.

1) What is the ascension?

When he had led them out to the vicinity of Bethany, he lifted up his hands and blessed them. While he was blessing them, he left them and was taken up into heaven. Then they worshipped him and returned to Jerusalem with great joy. And they stayed continually at the temple, praising God. (Luke 24 – NIV)

The Ascension seems such a strange doctrine. It’s hard enough to believe that Jesus physically rose from the dead. But the idea that he physically rose to heaven seems far-fetched. The usual liberal dismissal of this is expressed by

Bishop Richard Holloway who says Jesus is not coming back. And the best way to honour him on his birthday is to look for him not in the skies, but in the streets of our own town. That’s one solution: deny the Ascension happened and spiritualise its meaning so that it becomes all about us.

For those who actually believe the Bible and don’t just make up their own faith the teaching is quite clear. Two Greek words are used for Ascension. One talks about Christ ascending himself, reflecting the Old Testament’s Psalms of ascent (Ps 120-134), another talks about Christ being raised up. He was raised up. An early church statement of faith is expressed in Paul’s letter to Timothy:

Beyond all question, the mystery of godliness is great:

He appeared in a body,

was vindicated by the Spirit,

was seen by angels,

was preached among the nations,

was believed on in the world,

was taken up in glory.

Where did Jesus Ascend to?

Heaven. The bible uses the term heaven or heavens in different ways. It can refer to the sky above, or the vast region of stars beyond our world, or another dimension altogether – the realm of God beyond all sense perception. The Ascension does not mean that Jesus is somewhere up there in the stars – where if only we could get a spacecraft which could travel far enough and quick enough we would be able to get to him. One of those ‘ignorant’ earlier Christians, John Calvin, put it clearly: “What? Do we place Christ midway among the spheres? Or do we build a cottage for him among planets? Heaven we regard as the magnificent palace of God far outstripping all this world’s fabric.”

Heaven is the place where God is. He is of course everywhere, but this universe has been tainted by sin and it is therefore not, in Moltmann’s phrase ‘totally pervaded by his glory’. Heaven is. To put it in modern terms, heaven is another universe. Out of this world, but nonetheless real.

What does the Ascension of Jesus tell us about Jesus?

Many Christians seem to think that the Ascension means the undoing of the incarnation. God became man in Jesus, and after Jesus ascended to heaven he became God again. CS Lewis observes:

“We also in our heart of hearts, tend to slur over the risen manhood of Jesus to conceive him, after death, simply returning into deity, so that the resurrection would be no more than a reversal or undoing of the incarnation.”

What does it mean for us?

1) Jesus is not here – At least not in his body. He has gone. He is risen. We do not literally see his body, hear his voice or touch the holes in his hands. But that does not mean we cannot know him, hear him or be with him. We need to point out to our unbelieving friends that the argument ‘if only Jesus was here and I could see and hear him, then I would believe in him’ does not hold water. Why? Because most of the people who did see and hear Jesus did not believe in him. In fact many of them crucified him! They and we, need something more.

I have just become a granddad. The only problem is that my daughter is in Australia. I can’t just hop on a plane and go over and be physically with her. But through the wonders of modern technology I have seen my granddaughter, spoken to her and to my daughter. There is a sense in which the connection between the believer and Christ through the Holy Spirit is like the ultimate Skype call. The bible uses the idea of being ‘in Christ’ to describe the intimacy of the connection in such a way that it parallels the intimacy of the Father, Son and Holy Spirit. Just as Skype collapses the distance between here and Australia for some of our senses, so the Spirit collapses the distance between here and heaven so that we really are in Christ. When we sit at the Lord’s Table he really is there, when two or three gather he really is present. The Holy Spirit unites Christ and his Church in such a way, that although the ascended Lord is not everywhere, he is everywhere accessible.

Again to our unbelieving friends we point out that unless they are ‘born again/from above/of the Spirit’, they cannot even see the kingdom of God, never mind enter it. Becoming a Christian is not about adopting a way of life, religion or philosophy. It is about becoming connected to the living, risen, ascended Christ. Becoming part of his body. Knowing him, following him, serving him, loving him. It is the most dynamic and real of relationships.

Hebrews 4: “Therefore, since we have a great high priest who has gone through the heavens, Jesus the Son of God, let us hold firmly to the faith we profess. For we do not have a high priest who is unable to sympathise with our weaknesses, but we have one who has been tempted in every way, just as we are—yet was without sin. Let us then approach the throne of grace with confidence, so that we may receive mercy and find grace to help us in our time of need.”

We really can approach the throne of grace. It’s not just some inner mystical experience. This is for real! When we take communion, it’s not just a symbol, nor is it the literal physical body of Jesus – but He is really present. We are connected to the whole Christ and fed by the whole Christ.

Jesus speaks to us through the Bible and the Spirit

He is our king. Whatever our circumstances, however powerful our enemies appear to be – Christ reigns over all. His kingdom will come.

Ephesians 1: “I pray also that the eyes of your heart may be enlightened in order that you may know the hope to which he has called you, the riches of his glorious inheritance in the saints, and his incomparably great power for us who believe. That power is like the working of his mighty strength, which he exerted in Christ when he raised him from the dead and seated him at his right hand in the heavenly realms, far above all rule and authority, power and dominion, and every title that can be given, not only in the present age but also in the one to come.”

4) We have a glorious hope:

“Our citizenship is in heaven. And we eagerly await a Saviour from there, the Lord Jesus Christ, who, by the power that enables him to bring everything under his control, will transform our lowly bodies so that they will be like his glorious body.” (Philippians 3 – NIV)

The Christian is always in the realm of the ‘now but not yet’. Christ reigns now, Christ is with us now, but there is more to come. There will come a day when our bodies will be renewed like his. We shall be like him for we shall see him as he is. This is not ‘pie in the sky when you die’ but ‘steak on your plate while you wait!’ It is because we are ‘in Christ’, it is because we know Christ the king, it is because we are assured of his return and ultimate victory that we can live in hope, serve the poor, weep with the broken, and share the Good News. We are now Christ’s body here on earth. He is our Head. We can do nothing without him. But we can do all things through him.

Some might say, that’s all very well but it sounds like high falutin’ theology… not much practical use. You are kidding! There is nothing more practical than this. Even in terms of evangelism and worship, when we are gathered together as the covenant community of Christ’s people, we need to know his presence in such a way that any unbeliever walking in falls down and says ‘truly God is among you’! This is only the foretaste, the first fruits. The best is yet to be. We long for his return, when everything shall be reconciled. Maranatha. Even so come soon Lord Jesus.

You can follow the rest of the series here – The Ultimate Proof – The Resurrection of Jesus – Apologetics 101 – no.10