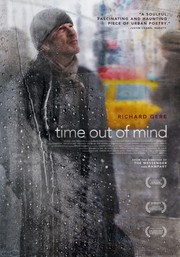 It’s been a while since my last film review.  To be honest I could have written two reviews about this – both of which would have been true.  The first would have talked about how boring and dull this film is.  But the second, ie. this one, reflects a more considered approach and some interesting insights from my wife – who helped me to reevaluate it.

If what you want from a film is humour, action, drama and a good nights entertainment – then don’t bother going to the cinema to see Time out of Mind.  On the other hand if you love brilliant acting, thoughtful social comment and New York, this is a great film for you.

I won’t put in any plot spoilers, other than to say there isn’t much of a plot.  Richard Gere plays a homeless man, estranged from his daughter, seeking to exist on the streets of Brooklyn.  His performance is simply stunning.  I mean brilliant.  He was so good that when this was being filmed (and it was filmed as ‘real’) a French woman gave a pizza to him because she did not recognise him and thought he really was homeless.  This is not a feel good happy film, but it does give, I think, a real insight, into a world which few of us know.

One thing to think about, which my wife picked up on, but none of the other reviews I have read, seem to have noticed; is Gere’s sidekick buddy in the hostel real or part of his ‘time out of mind’.  Maybe because she is a mental health officer she had some insight.  Judge for yourself but it made a lot of sense to me!

From a Christian perspective there is one stand out line.  At one point Gere says “I’m homeless. I’m nobody.  I don’t exist”.   We follow the one who had nowhere to lay his head.  In the eyes of this world, with its judgements based upon race, status, wealth, talent appearance, job and where you live, then for many people there is no hope.  Such people do not need just soup and a bed for the night, they also need to know they have a soul, and that they are made in the image of their Creator, and therefore are infinitely valuable.   The Gospel is Good News for the poor.   The Gospel brings people into their right minds.  Christ turns ‘Time out of Mind’ into ‘Eternity in Mind’.