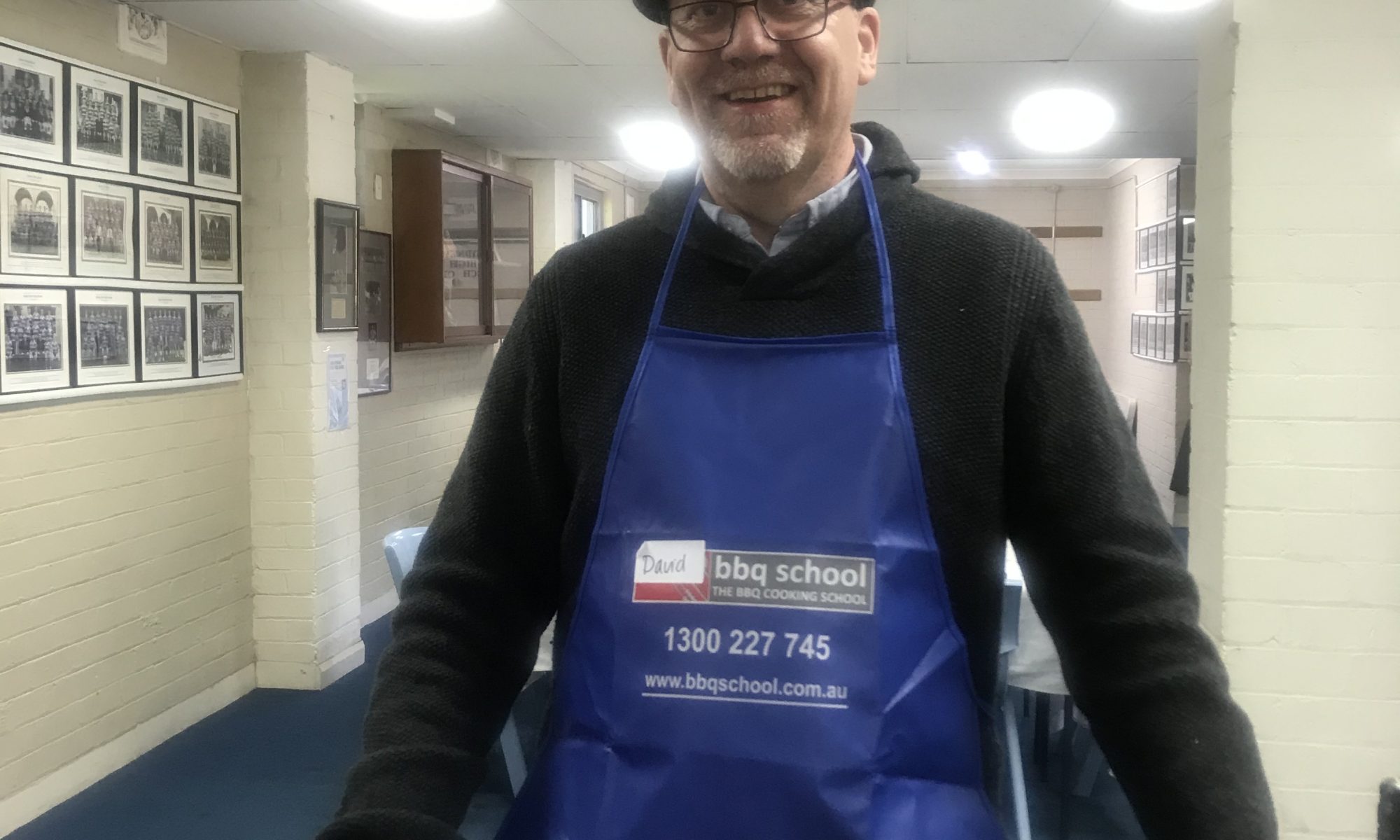 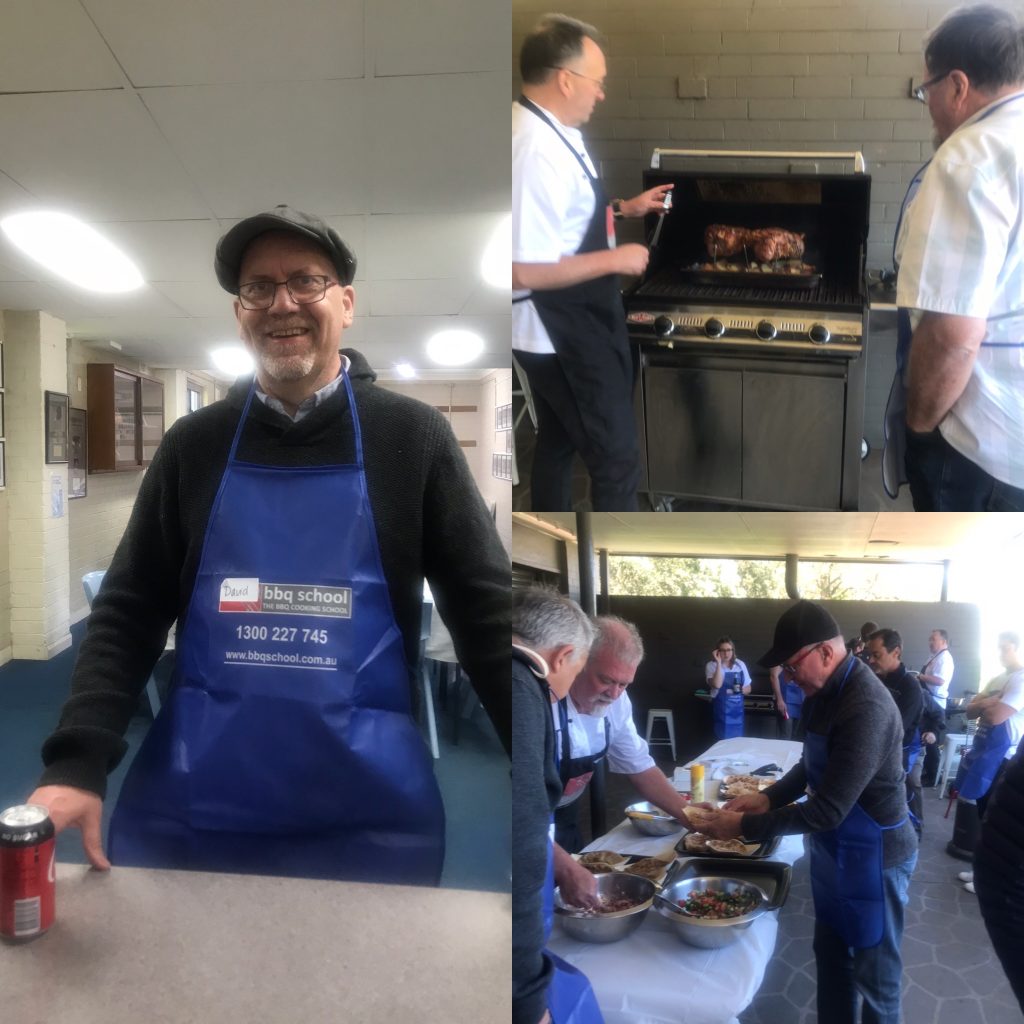 My wonderful wife bought me a lovely present a while ago –  a bar-b-que cookery course voucher.  Yesterday I used it. It was a fascinating experience – and I hope will bear some practical fruit later on.

I turned up at the venue and was surprised to see that I was part of a group of 20 – almost all men (there were a couple of girlfriends).  Apparently, bar-b-queuing is a male preserve.  There were even four guys Having travelled all the way from Scotland to learn how Aussies did Bar-B-Que. The chef was from Dumfries!  His assistants were from Chile and Sydney.

There were a lot of cooking tips – too many to remember so I took notes.  In that I was a bit odd because I was the only one who did so!   I won’t share with you all the tips, but I did think the following were interesting:

Ok – enough of the cooking tips.   What about the people and the culture?   It was great fun .  It’s always good to talk to different human beings!  I find people’s stories and views fascinating.  Who knew that each Bar-B-Que’s has its own personality?  Or that some people will pay £15,000 for a meal?  Or that the Japanese sometimes play classical music to their cows in order to destress them before they are slaughtered – apparently it makes them taste better.  I guess that’s why kobi beef is the most expensive in the world.

Even Chef’s Talk About China

The chef suggested that because of Covid for the next year or so meat would remain relatively cheap in Australia, but after things return to ‘normal’, it will become very expensive.  Why?  Because of a big cultural change in China. Beef has become more and more popular in Chinese culture. There are 1.4 billion people in China – and not a great cattle raising tradition.  Australian farmers will sell to the highest bidder – but it is more than that.   The CCP will outbid – they will also buy up big farms and use them entirely for export (if the Australian government lets them do so).  The chef spoke of this already happening with big dairy farms – with the milk being shipped to China from Australia.  He wondered, as a foreigner, why Australia was prepared to sell off its resources in this way?  He is right.  Perhaps one of the reset issues that will occur in the world is countries taking a second look at globalisation and recognising the need to protect basic supplies and resources.

Speaking of Covid we had some great news today in NSW – no new cases at all.  Not from community transmission or quarantine from international travel.  Indeed in the past four days there has been no community transmission.    I see a growing confidence all around and lessening of fear in people.  This is especially seen in the wearing of masks.  My experience is that the number of people wearing masks on public transport has dropped – as has the number of those doing so in church.  There are also cultural factors at play – in areas of Sydney with more Asians there are more masks.  I was in Newtown this week and there were more masks there than in the North Shore.  Why?  I think there the wearing of a mask is much more a political statement – ‘I don’t support Donald Trump, so I wear a mask’. The equation of the two is both simplistic and typical of the highly politicised and polarised society that importing largely American culture wars creates.

Certain Hope in an Uncertain World.

Annabel was saying that we live in an uncertain world and people being more conscious of that, are feeling powerless.  This results in, fear,  frustration and fury – for those who do not know the One who has the whole world in his hands – and even sometimes for those who do and have forgotten Him.  For much of my ministry I have been aware that I could not fix myself, never mind other people. I used to say to people that Cold Play’s Fix You was the anti-motto of St Peters.  In 2011 I was dramatically made aware that even my own life was not in my hands.  This awareness can sometimes lead to a fatalistic paralysis – but it can also lead to a more faithful life.   Just because you can’t fix the world doesn’t mean you don’t care about it – indeed it may free you to care all the more.  For the past few weeks I have been teaching Romans 8  – which speaks of our sure and certain hope.  I don’t know how people live without Him!

I pray you will have a hopeful and faith-full week.  Enjoy the gifts that God has given you – but remember that for all these things God will call you to account (Ecclesiastes 11:9).