A young boy went home from a children’s holiday club and when his mother asked him to do the dishes, shouted at her and told her that he didn’t have to do that any more because he had become a Christian! Cue irate phone call from the mother to yours truly and a quick visit to the home to inform our young friend that he clearly had not become a Christian. By their fruits you shall know them.

When we become Christians we should become better children to our parents. We should honour and respect them even more than we did before. In the example given above the Pharisees were using the excuse of religion not to provide for their parents. We have a responsibility to provide for and care for our parents – especially as they get older.

Your parents may be afraid that because you are a Christian you will honour them less. Show them that the opposite is the case. However if your parents ask you to do things that go directly against the Word of God that is a different matter. We are to honour and obey our parents – whatever their religion. But we are never to obey our parents absolutely.

Jesus put it strongly “If anyone comes to me and does not hate father and mother, wife and children, brothers and sisters—yes, even their own life—such a person cannot be my disciple.” (Luke 14:26). Obviously he did not mean that we are to hate our father and mother as a matter of course, any more than he meant we are not to love our own life! He is just simply saying that unless we are prepared to give up all those things we value most dearly, including our parents, we cannot be his disciples. 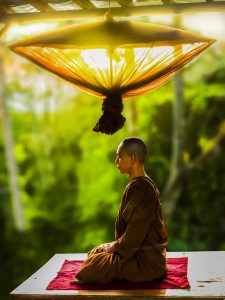 What if your parents want you to go to a Buddhist temple? I would suggest that it depends upon what age you are. A young child does not really have an option – but an older one does. Perhaps the story of Naaman might be helpful. Naaman was commander of the king of Aram. When he was healed from his leprosy through Elisha (see 2 Kings 5 for the whole story) he promised not to worship any other God but the Lord. “If you will not,” said Naaman, “please let me, your servant, be given as much earth as a pair of mules can carry, for your servant will never again make burnt offerings and sacrifices to any other god but the LORD. 18 But may the LORD forgive your servant for this one thing: When my master enters the temple of Rimmon to bow down and he is leaning on my arm and I have to bow there also— when I bow down in the temple of Rimmon, may the LORD forgive your servant for this.” “Go in peace,” Elisha said. He was asking for a special dispensation, when as part of his duties to his master he had to go into the temple of a pagan god and bow down with his master. He was given that dispensation.

Again we have to be careful here – but I think there is a clear principle – that sometimes we are in situations where we are faced with the choice of two wrongs – in this case the wrong of being in a pagan temple vs. the wrong of disobeying his master. In this case Naaman was given permission to choose the former. On the other hand Daniel refused to go along with the commands to worship a pagan god.

These are difficult situations. They are part of the division that the Gospel brings – but we hope and pray that they will also result in a greater unity – as your parents see that you love them more because you are a Christian, not less. Honour, respect, obey in the Lord and pray for them. God often works in families. May you be the messenger of salvation to them.

CONSIDER: Can you think of other situations where there might be a clash between our family/civic duties and our obedience to Christ? How can we have a loving disobedience?

PRAYER: Father in Heaven, We bless you for our parents. Help us to honour, respect and love them. Help us never to put them before you, but may we glorify you by serving them, when such service is not against your will. Forgive us when we even use our faith in you to dishonour them. We pray that all we love would come to know you, in Jesus Name and for his glory. Amen