See What a Morning! The Victory of the Cross for The Bruised Reed

When we survey the wondrous Cross – what do we see? The Cross seems like the ultimate defeat or the ultimate victory.  The world does not understand the Cross – it seems like weakness or foolishness to both the world and the religious.   People try to make the Cross merely a symbol – they deny its purpose and its clarity.   They cannot grasp how essential it is – not only to becoming a Christian, but in order to live as a Christian.   Sometimes as a Christian I feel battered and bruised.   Then I turn to Richards Sibbes The Bruised Reed – an astonishingly deep, profound, deeply biblical and practical book – which is a balm in Gilead – it is medicine for the soul. 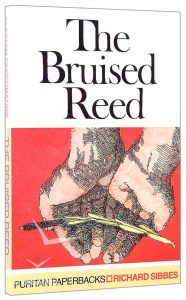 This Easter morning I read chapter 22 entitled Christ’s Government is Victorious. I hate triumphalism – in all its worldly forms (far too often seen in the Church) – but there IS a biblical doctrine of triumph – the triumph of the Cross. The following is a summary of what I read.

The purpose of the resurrection was to seal to us the assurance of this victory over the devil, death and Hell.   Sibbes sees this as having several purposes in terms of our own ‘raising’.

The same power that the Spirit showed in raising Christ is the same Spirit that works in the Church and in every particular Christian. No matter the defeats we face in this life – the resurrection guarantees that we are raised out of them all.

We receive this power by faith. We are ‘dead with Christ, but risen and sitting together with him in heavenly places (Ephesians 2:6).   We are dead but risen. We have this resurrection joy and faith. Christ works his resurrection power within us.

There is a sense in which we have the resurrection victory already.   Christ is the little stone cut out of the mountain that Daniel mentions (Daniel 2:35). The mountain cannot stand against it. “When chaff strives against the wind, stubble against the fire, when the heel kicks against the pricks, when the pot strives with the potter, when man strives against God; it is easy to know on which side the victory will go. The winds may toss the ship wherein Christ is, but not overturn it. The waves may dash against the rock, but they do not break themselves against it”

But why does the victory seem to go with the enemy?

Why do we suffer so much?

2) Our victory is by degrees – we are too hasty in expecting to see it in full just now.  We need to be patient.

3) God often works by contraries – When he means to comfort he will terrify first. When he means to justify he will condemn first.   Whom he wishes to make glorious he will abase at first.   A Christian conquers even when he is conquered.

4) Christ’s work, both in the Church and in the hearts of Christians often goes backward so that it may go the better forward. We take deeper root by shaking. When we are foiled let us believe we shall overcome. When we are fallen let us believe we shall rise again. God’s grace even in this state of imperfection is stronger than man’s free will in the state of first perfection. Just as the strongest faith may be shaken, so the weakest faith will prevail.

Such is the goodness of our sweet Saviour that he delights to show his strength in our weakness.

This is useful teaching because it is for the great consolation of poor and weak Christians. We should know that a spark from heaven, though kindled under greenwood that sobs and smokes, will still consume everything at last.  Many waters cannot quench love. In the morning we often see the sun hidden by clouds, but little by little it drives them away.   We have clouds of fears and doubts but the fire of Christ within conquers all. Faith whereby Christ rules, sets the soul so high, that it overlooks everything else as far below.

Sibbes then goes on to talk about the signs that we have this faith…before finishing with the three types of victory the resurrection brings.

There are so many times in life we face defeat…but because of the Cross and Resurrection we can never ultimately be defeated. O death where is your sting! O grave where is your victory!    Death is dead. Love has won. Christ has conquered.

Songs, Spiritual and Secular, to Contemplate this Easter