Did you hear the one about the doctor, the politician, the journalist, the artist, the vicar and the teacher?  Well, let’s begin with the teacher.  Watch this stunning video of a Scottish teacher explaining to a pupil why he had been kicked out of class.

The pupil’s crime was that he had dared to state the view that there were two genders, male and female.  Look at the teacher’s response.  Apart from being angry, bullying and intimidatory..it is chilling.

My opinion is acceptable in school, but yours isn’t.  You need to shut up and keep that opinion to your own house…

This is so Orwellian….facts don’t matter – it’s only what the policy is…

“How many fingers am I holding up Winston?”

The Teacher goes on:

I am not putting my opinion, I am stating what is national school policy….I know what you think, and I know what the authority thinks.You chose to make an issue of making a point which is contrary to policy.

I am a Scot who loves education – which is why I hate what my country is becoming – under The Party.   This totalitarian ideology is being used to indoctrinate children into the unscientific and harmful ideology of Queer theory.  Not every pupil is as brave as the young man who took this video.   On Sunday I was speaking to a group of young people who were asking how they could disagree with a teacher.  They are genuinely scared and intimidated.

Again it reminds us of another prescient song – in which the Teacher was also Scottish!

But this is not just a Scottish problem – when I wrote A.S.K , the one question that came from every continent was about gender and transgender.  This irrational ideology has been spread through the elites and is being transmitted by the Internet, media and ‘education’ into the general populace – especially the children and young.  When the UK parliament debated Transgender I recall with horror a ‘Conservative’ MP stating that we should forget the adults and concentrate on getting the children.

Intimidation and indoctrination are the modus operandi of the current Establishment.  I could tell you of teachers who are scared not to teach this new doctrine – or to question it.    The TIE (Time for Inclusive Education) is being used as a Trojan horse to impose this ideology.  Stonewall use their carrot (we will give you an LGBT award) and stick (we will report you to the authorities) approach to impose their teachings.  And everyone caves in.  Our children now regularly have LGBT days, weeks and months imposed upon them – and woe betide anyone who does not wear the Rainbow!  To even question means your card is marked.

The Doctor – again I could give numerous examples – several doctors have contacted me (on the promise of anonymity) to tell me about the pressures they are under.  Like the consultant who was told to instruct his staff in a maternity ward not to use the term ‘breastfeeding’ because it would be offensive to the two trans men who had artificial chests to enable them to breastfeed.  Because they do not have breasts it should be called ‘chestfeeding’. Or the GP who is under pressure to refer children to the Tavistock clinic by parents who think being a tomboy is an indication of being ‘trapped in the wrong body’.  Or the medical student who worries about whether they will get a job if they are asked about gender identity.  Or the nursing student whose second lecture in their first year was on ‘nursing transgender’ (0.001% of the population). 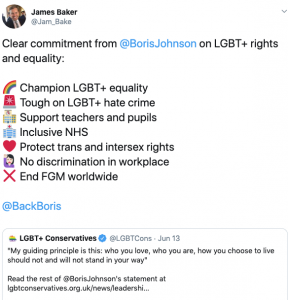 The Politician – I think about the politicians who want to speak and vote against the Scottish and Governments proposals for gender self-recognition but are scared because of the Party (in this case it is almost all parties) and the online Mob.   Again if you want an example of how things are going – just look at the current Tory party leadership race.  Boris Johnson tweets about how LGBT friendly he is – and Rory Stewart tells a Trans person conveniently sitting at the front of his audience and selected to ask a question that we accept your identity…and that we can be whoever we want to be.  Imagine the uproar if he had said, ‘we love you, abhor discrimination and violence and want to protect you and help you, but I don’t accept that we can choose or change gender'”?!  (Note – After I wrote this it came to light that Kate Forbes, Scottish Government minister and Joanna Cherry SNP MP and 13 other senior SNP politicians have spoken up about this – see the link at the end….kudos to them.  Pray for them…)

The Journalist –  I think of the journalist who, after interviewing me on transgender, told me that they agreed entirely but could not write a favourable piece because they could lose their job.  I  understand – after all, I was dropped from BBC Radio 5 Live for daring to disagree with the new State doctrine.    The media in general, with honourable exceptions like Iain MacWhirter and Janice Turner, struggle to do their job.  Witness the horrendous case of Trans activist, Munroe Bergdorf and the NSPCC –

The Woke Corporation –  Much of today’s power lies in the Corporations.  They have made a Faustian pact with the Political and Media Establishments.  They provide the money – providing they are left free to make money….and they show how ‘compassionate, tolerant, caring’ etc they are by supporting whatever the cause d’ jour is.  In today’s Zeitgeist, this means that Budweiser will give you beer mugs coloured according to your sexuality, and M and S will give you LGBT sandwiches!

The Artist –  Our arts Establishment are not free thinkers either.   Everywhere you go the Trans ideology is presupposed and imposed.  We were in London last week and the South Bank was full of Trans ‘art’…..If you want to see how the Educational and Arts Establishments are intertwined then read this horrific account of ‘training’ for teachers at the Hayward Gallery

The Vicar – Much of the Church Establishment (Church of England, Church of Scotland and ‘liberal evangelicals’ like Steve Chalke, Jayne Ozanne and Vicky Beeching) goes along with the Civic Establishment, precisely because they have more interest in being part of the latter, rather than part of the Kingdom of Christ.   But not all…..yesterday we brought you the story of Rev. Peter Hughes – who was thrown under the bus by his own denomination, for daring to question the Trans ideology.

The Teacher above is not unique.  It is the way our society is going.  A new ideology and morality is being imposed from on high on all of us.    Many more of us need to speak up and act, like this young man – before it becomes too late (and videos like this are banned from YouTube and social media for being ‘hate speech’.   Where are the politicians, journalists, health staff, educators and clergy who are prepared to speak up about this?  It may be personally costly – but the price of silence is even greater.

PS.  This podcast is even more relevant now….

And this good news came in after I posted this article…the fightback is on!

Fifteen senior SNP politicians, including three government ministers and a deputy presiding officer of the Scottish Parliament, have called for the Scottish Government not to “rush” into legislation they claim could change the definition of what it means to be male and female.

PS.  I should not need to say this but I think I have to add this caveat.  The above should not be taken as a reason or excuse for attacking or mocking those who suffer from Gender Identity Disorder.  They need our compassion and love not our spite or hatred.  It’s because we love the people that we disagree with the ideology.