What is the most difficult thing to believe in the Bible?  I think the cross is a stumbling block for all human beings.   This is the fifth thought for the day from Premier…

This talk was based on chapter 5 of Magnificent Obsession.   (I heard some encouraging news this week of a church which gives all its young people who are heading to College or University a copy!).  Some of the quotes in that chapter are below.

“…unless for him Some other able, and as willing pay The rigid satisfaction, death for death. Say heavenly powers, where shall we find such love, Which of ye will be mortal to redeem Man’s mortal crime, and just the unjust to save, Dwells in all heaven charity so dear” John Milton – Paradise Lost – III:210-16

“once Lewis overheard a firm atheist remarking to a colleague that the evidence for the historicity of the Gospels was actually surprisingly good. The atheist then paused thoughtfully and said: “About the dying God. Rum thing. It almost looks as if it really happened once.

“the fact is that the cross isn’t a form of cosmic child abuse – a vengeful Father, punishing his Son for an offence he has not committed. Understandably both people inside and outside the Church have found this twisted version of events morally dubious and a high barrier to faith.” (Steve Chalke’s greatest blasphemy)

There is no one, no entity or higher form that she can appeal to, or be reconciled with, or that can forgive her. There is nothing outside her. In her imagination she has set the limits and terms.” Atonement (Ian McEwan). 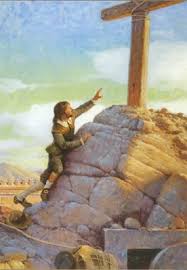 “And I saw one, as I thought in my mind, hang bleeding upon the tree; and the very sight of him made my burden fall off my back (for I groaned under a heavy burden) but then it fell down from off me. It was a strange thing to me, for I never saw such a thing before; yea, and while I stood looking up, for then I could not forbear looking, three Shining Ones came to me. One of them testified that my sins were forgiven me; another stripped me of my rags, and gave this broidered coat which you see; and the third set the mark which you see in my forehead, and gave me this sealed roll.” (Pilgrims Progress p.57).

. “Although the preaching of the cross does not agree with our human inclination, if we desire to return to God our Author and Maker, from whom we have been estranged, in order that he may again begin to be our Father, we ought nevertheless to embrace it humbly” Calvin (Institutes Book 2 Ch. VI:1)

“There is no new insight into the Cross which does not bring, whatever else come with it, a deeper sense of the solemn holiness of the love that meets us there.”   P T Forsyth

‘Where are safe and firm rest and security for the weak but in the Saviours wounds? The mightier he is to save, the more securely I dwell there. The world menaces, the body weighs us down, the devil sets his snares. I fall not, for I am grounded upon firm rock. I have sinned a grave sin. My conscience is disturbed, but it will not be perturbed because I shall remember the Lord’s wounds” (Bernard of Clairvaux)

Premier Thought for the Day 4 – The Bible – How do we know the Truth?