One of the more puzzling aspects of the Brexit debate I don’t understand (and I mean I genuinely can’t get my head round it) is the concern about the possibility of a shortage of workers after Brexit.

Only this week I heard that one in ten care home staff are from the EU and that there are major concerns for agriculture (especially fruit picking) and the NHS.   I don’t deny that these concerns are genuine – so what is my problem?

There are around 120,000 unemployed fit adults of working age in Scotland – 1.45 million in the whole UK.   According to the Joseph Rowntree Foundation   17% of homes in England with working age population are ‘workless’.  In Scotland it is 21%. Over one in 5.   Given these figures why is it that the fruit farms are unable to find workers?

I don’t know the answer but let me put this out there to see if anyone else can come up with better answers. I will restrict this to Scotland but I suspect it may apply across the whole UK.

When I was growing up I was desperate to work in the ‘tattie’ holidays and earn some much-needed pocket-money.  I also worked on farms in the summer holidays.  How many teenagers are able and willing to do the same today?  As a student we had long holidays because we needed to spend the summer working to fund us during term time.  Why can’t students work on the farms during the summer?

In Dundee we had the ‘berry’ buses which would come round the housing estates and pick people up to go out and work (and eat!) the strawberries and raspberries.  Would anyone be bothered to do that today?

I think another problem is that we have demeaned the notion of physical labour as though it was somehow beneath the now more than 50% of us who have been to University.   We think that dirty jobs, or poor jobs should be left to our imported wage slaves.  In other words we pay others to do the jobs we think are beneath us. And perhaps we have just become lazy?  I know of at least one agricultural business that really wants to hire Scots but almost exclusively employs Polish people because they are more reliable, honest and harder working.

It’s too simple to state that Scots can’t be bothered.  I know several young (and not so young people) who would love to work in the holidays and at weekends but they can’t get the jobs because the employers don’t want them.  Why would that be the case?   Because a lot of agri-business doesn’t employ individuals as such but gets ‘gang masters’ to recruit their workers.  It’s a lot cheaper to import cheap labour.  Yes we can kid ourselves that we pay the minimum wage – but there is a way round that.  I know of one firm which pays the minimum wage but then charges its ’employees’ £450 per month for their on site dormitory accommodation.  The working and 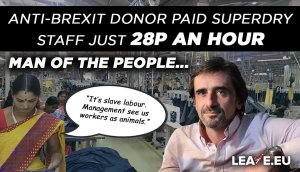 living conditions are atrocious. I know of another health care business which has an ‘unofficial’ policy of just employing Eastern Europeans because they are cheaper and easier to fire.   “freedom of movement’ is a great thing for the middle classes and for those businesses which like the cheap labour.  I’m not so sure it is an overall good for the poor in this country.  (Incidentally that’s one of the reasons that the owner of Superdry is so keen to keep us in the EU – his fortune was made on the backs of poor people who because of ‘freedom of movement of capital and labour’ he could exploit – the system works for him and his fellow corporates – that’s why they want to keep it!)

3. We have lost the Protestant work ethic –

which used to be one of our greatest assets.  There used to be great pride in being working class.  Being a farm worker (my dad), a nurse (my mum), a miner, a docker, a bus driver were all seen as badges of honour.  Now, whilst they may be romanticised in the past and in middle class plays, it seems as though (often due to well-meaning middle class intervention) we have turned our working class into a benefits class.  A number of years ago a lady came to see me and told me that she was clearing £800 cash per month with housing benefit and other things being taken care of.  In order for her to get a job which would give her the same cash to spend she would have needed to earn £25,000 pa.  Given that she had been out of work for over three decades, had no experience and skills, that was just not going to happen.  I felt so sorry for her because her attitude (as is that of many others) is why should I work for something I can get for free?  And she didn’t know the answer – its called dignity and self-respect.  I recall my father being unemployed for a while after he lost his job as a farm labourer….although he had paid his national insurance and his taxes all his life, he did not want to sponge off the State (we pointed out that that is exactly what he would not be doing!).

We have also turned disability into an opportunity to massage the unemployment figures.  There are some areas of Scotland where one in five people are on disability benefit.  I just don’t believe that we have that number of genuinely disabled people.   The tendency to call everything ‘disability’ does a great deal of harm – especially to those who are genuinely disabled.

Speaking of benefits – I do think the whole system needs reformed.  There are people who can ‘play’ it very well.  They are dishonest and manipulative.  Often middle class people know how to use benefits well.   And the rich know how to get their tax breaks.  But others genuinely struggle and need food banks!   I think of the woman in Brora who when she became a Christian told the benefits people that she was earning 50p per hour cleaning a wealthy woman’s home – and she was penalised.  Meanwhile every week a man who was on disability benefit and was given a disability car used to come and park it outside the Manse, before literally jogging down to the pub!

Another factor may be that in turning Universities into businesses which provide a product for its consumers, rather than primarily being about education we have made a big mistake.  We have demeaned the trades and slowly destroyed manufacturing.  Somehow we have sent out the message that getting a degree in social studies from a former Polytec is more valuable than doing an apprenticeship in plumbing.  In Scotland we have undermined colleges whilst promoting Universities – which in turn now have a cap on Scottish students and are desperate to improve their business by getting more English and overseas.  As a result this week we have ended up with the bizarre situation of Scottish Universities having spaces in ‘clearing’ which are not available to Scottish students.

IN that regard at what some term the higher end of the scale we face a skills shortage because our governments don’t do long-term thinking and have not invested in enough training – again preferring to rely on the short-term fix of recruiting such as doctors and nurses from overseas.  Don’t get me wrong I love the fact that our NHS is multi-national in its employment – but I think its wrong for us to take much-needed nurses from Zimbabwe, or dentists from Rumania, because we can’t be bothered training enough of our own citizens.

The Protestant Work Ethic was not the view, as is often so erroneously taught, that you proved you were one of the Elect by working hard.   It was rather the view that as a human being made in the image of the Creator you were here on this earth to create, to steward and to provide for your family and society.  If a man shall not work he shall not eat.  It was a view which regarded manual labour as a creative gift from God.  It taught that we were dependent on God, not on the State. And it applied an equality and dignity in this to all human beings.  In forgetting that, we have turned human beings from glorious independent creative responsible creatures, into pathetic beings dependent on the State forgetting who and whose we really are.

Thats why we can’t and won’t pick berries.  We have lost our dignity and self-respect and live in a fantasy land where everyone is owed a living and few make one.

This country was built on the Protestant work ethic, not the liberal shirk one.  Perhaps its time for us to regain our dignity and self-respect and stop whining that other people won’t come and do our work for us?