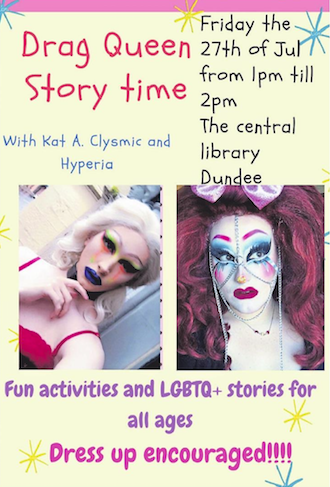 What would you do if the following story appeared in your local newspaper?

a) Say ‘what a great idea’ and be thankful that tax payers money is being spent in such a constructive way?

b) Ask ‘What’s the world coming to?’, shrug your shoulders and get on with life?

c) Write an angry letter to the paper pointing out that we have all gone to the dogs!

For me none of the above is the answer.   Although I did write a letter (see below).  The

problem is that the way the narrative is framed this is all about ‘inclusion and diversity’, preventing hate crime and bringing peace to the world. The latter was according to the editorial in the paper .   Note that the editor acknowledges that there is a ‘deeper meaning’ behind the event.  Indeed there is.  It’s all part of the current fashion to indoctrinate our children into the Queer theory revolution that our elites are pushing on the rest of us.

My problem was how do you write a letter that does not just come across as ‘angry from Tunbridge Wells’…and thereby feeds the narrative anymore.  I tried to set the story in a wider context and offer a challenge and questions which I hope would cause others to question their own presuppositions that this must inevitably be a good thing.  I also wanted to express the fears, questions and disappointment of those who are fed up of taxpayers money being used for this constant propaganda.  Whether I succeeded or not I will leave you to judge.

25% of Dundee’s children are living in poverty. 10% are suffering from hunger. One in five children and teenagers are not functionally literate. Mental health issues amongst young people are increasing exponentially. And so we call a drag queen to promote ‘inclusion and diversity’ (Courier 26th July)!

I have no objection to a drag queen giving children some fun – but lets not pretend that this is about challenging stereotypes. Given that drag queens thrive on the stereotypes of extreme ‘feminine’ clothing and behaviour, this will only reinforce those stereotypes.

Nor is it about promoting ‘inclusion and diversity’. Its about promoting one particular philosophy of sex and gender known as Queer theory – to the exclusion of all others. The fact that this is the current fashion for the civic elites, does not mean that the rest of should not be allowed to question whether this is a good use of tax payers money. .

The Transgender community are about 0.01% of the population. The Christian population are over 50%. I wonder if Dundee City Council would pay someone to come and have a bible story time in their library or would they regard that as non-inclusive?

Having a drag queen in the library will not bring about peace and the end of hate. The only thing that can counter hate is love. Which is why children need to hear more about the God who is love, and the loving commands that he gives to us. But apparently in todays topsy turvy world indoctrinating five year olds about LGBTQI is ‘inclusive’, whilst teaching about the God who is love is excluded.

This story is a great example of how our society is not dealing with the real issues of poverty and exclusion, so instead leaps on the latest cultural fade which allows our leaders to show just how caring and with it they are.   We are indoctrinating children into a philosophy which will only cause further harm and degradation.

What a shame that the Council won’t spend money on doing something that would do a great deal more good for the children.  I love the fact that the Courier picked up and highlighted this phrase “I wonder if Dundee City Council would pay someone to come and have a bible story time in their library or would they regard that as non-inclusive?”

Incidentally there were only 20 children attended…..

Let Them Eat Rainbows. The Sexualisation and the Poverty of Children