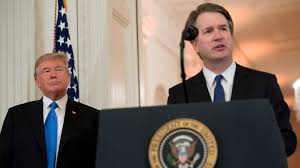 President Trump  in the UK

President Trump is in the UK this week and is receiving a mixed reception – as I wrote in this article there is a great deal of hypocrisy about this.  It’s somewhat hypocritical for those who lauded President Macron of France for welcoming President Trump for them to then turn round and complain about Prime Minister May doing so on a less extravagant manner. Richard Dawkins, from his self-styled ‘oasis of clear thinking’ sought to stir up the mob.

Whose decision was it to inflict on the Queen the odious society of this vain, narcissistic fool, whom I’d call evil if he wasn’t too stupid to be blamed for what he does? Join the London protest, Saturday 2 pm Portland Place & march to Trafalgar Square for rally, 5-7 pm.  (Dawkins Tweet)

Meanwhile President Trump appears to have made a wise choice in terms of his promised Supreme Court nominee, Senate Democrats,  Judge Brett M. Kavanaugh.  The New York Times reported that the Democrats  had “opened a broad attack painting him as an archconservative who would roll back abortion rights, undo health care protections, ease gun restrictions and protect President Trump against the threat of indictment.”    It amazes me both that Supreme Court Judges seem to have so much power, and that they are politicised….with millions of dollars being spent on seeking to either prevent or permit the appointment.

Football and politics – Paul Watson…shows up the insanity and folly of the culture we live in – It’s just becoming annoying how everything – even sport – becomes about Brexit and identity politics.

If you want an example of how crass and dumb supposedly intelligent politicians can be Martin Selmayr, the Secretary-General of the EU Commission tweeted this after the England game.

Prof Selymar forgets that the EU does not have a team in the world cup!

This week I had a meeting with some officials from the Scottish government who had requested to meet with me concerning the proposed Gender Self Identity bill. I will write a fuller report of the meeting but suffice it to say that the proposed bill is a confused mess which will either be self-contradictory or run a coach and horses through a significant proportion of current legislation. The trouble is that the Scottish government do not have a clue what they are doing and as a result they have made a commitment to drafting legislation which at its best will be unworkable and laughable and at its worst will do a great deal of harm to many people – especially children.

If you want to have some perspective on where this obsession with identity politics is going look at former Monty Python Star Terry Gillam who says that he is now going to identify as a black lesbian because of the complaints about six white men doing Monty Python. “I no longer want to be a white male, I don’t want to be blamed for everything wrong in the world: I tell the world now I’m a black lesbian… My name is Loretta and I’m a BLT, a black lesbian in transition.”

Meanwhile John Bercow has told Pink News that LGBT rights transcend religious freedom….the Speaker of the House of Commons is not averse to a bit of bullying himself and clearly sees that that intimidation of those of us who disagree with the LGBT agenda must be bullied into silence.

As have the World Health organization who have no decided that transgender should not be a listed psychological illness. Despite their protestations this has nothing to do with science and everything to do with political pressure. Because in todays post-modernist ‘alternative facts’world, science and facts are so Western.   ’

But we can fight back against the indoctrination and intimidation –  This from the Christian Institute –  Heavers Farm Primary, in Croydon, was planning an LGBT event featuring a parade at the school watched by families. But many parents objected, with one saying her son – who is under ten years old – is too young to be taught about homosexuality and transsexualism.Headteacher Susan Papas responded by saying that because the teaching was not officially part of Sex and Relationship Education, “we do not need to seek consent from the parents”.

The headteacher claimed the work was a key part of promoting fundamental ‘British values’ and suggested those with concerns were guilty of “spreading hateful messages”.

Local MP Steve Reed attended the stripped-back event – which included an assembly and a more low-key outdoor gathering – tweeting he was “very proud” of those children who attended. According to a newspaper report, 110 children did not attend school on the day.

The Philippine president, who recently sparked outrage for calling God stupid, has

courted new controversy in his largely Roman Catholic country by saying he will resign if anybody can prove that God exists.

“President Rodrigo Duterte, who has had a thorny relationship with the church, questioned anew in a speech late Friday some of the basic tenets of the Catholic faith, including the concept of original sin, which he said taints even innocent infants and can only be removed through baptism in a church for a fee.”

“Where is the logic of God there?” Duterte asked in a speech at the opening of a science and technology event in southern Davao city.

Duterte has clearly suffered from his religious experience and upbringing (he was for example abused by a priest) and may only know the perverted ‘Gospel’ he refers to here – but that is no excuse for rejecting the real Gospel or for setting himself  up as some kind of god.  He would do well to remember or read Psalm 2 – (and listen to Professor Carlos Frenk – see below).

“Why do the nations conspire and the peoples plot in vain? 2 The kings of the earth rise up and the rulers band together against the LORD and against his anointed, saying, 3 “Let us break their chains and throw off their shackles.”b 4 The One enthroned in heaven laughs; the Lord scoffs at them.” (Psalm 2:1-3)

The world has been transfixed by the extraordinary story of the rescue of the 12 Thai boys and their teacher.  The Australian had this excellent report.

“Key to the rescue mission was Australian anaesthetist Richard Harris, a world-renowned cave diver who was specifically requested by the British diving team that first found the trapped boys. He dived the 3.2km to where they were sheltering every day of the rescue to clear each one for the perilous journey out, and left the cave only when the last boy had been rescued each day.The Australian spoke briefly to Dr Harris this morning but he declined to comment.It later emerged that his father had died in South Australia shortly after Dr Harris emerged from the cave last night for the last time — one of the heroes of the rescue mission — with his long-time dive buddy, Craig Challen right behind him.A statement issued this morning by his employers at the MedSTAR Clinical Service hailed Dr Harris as a “quiet and kind man who did not think twice about offering his support on this mission”.

“He is an extremely humble man and the amount of weight and pressure that was put on him; I have the utmost respect for everything he has done. He is what I would consider personally one of the most professional doctors I have ever met and his unique skill sets as a specialist doctor and also his extensive experience as a cave diver was quintessential to the success of this operation which was led very well by the Thai authorities.”

There is so much to be thankful for in this – and to learn.  To descend 3.2 km into the depths to rescue those boys was wonderful.  We have someone who descended far deeper, from far higher, to rescue us.  Amazing grace!

.  This recent one featured an amazing man, the Physicist from the University of Durham, Professor Carlos Frenk.  The whole show is worth listening to – but I particularly loved this exchange (around the 32nd minute)

“Are you a religious person, do you think there is something greater?”
“Yes – God is a physicist – I don’t see how the order of the universe can be explained intrinsically within the universe itself – I should hasten to add that in physics we don’t provide you with any evidence for or against God – physics is limited in its reach”

Next week we hope to begin a new venture…the Quantum of Solas Podcast and LED will be merging….so LED will just become Quantum – the Wee Flea Podcast….see you next week…