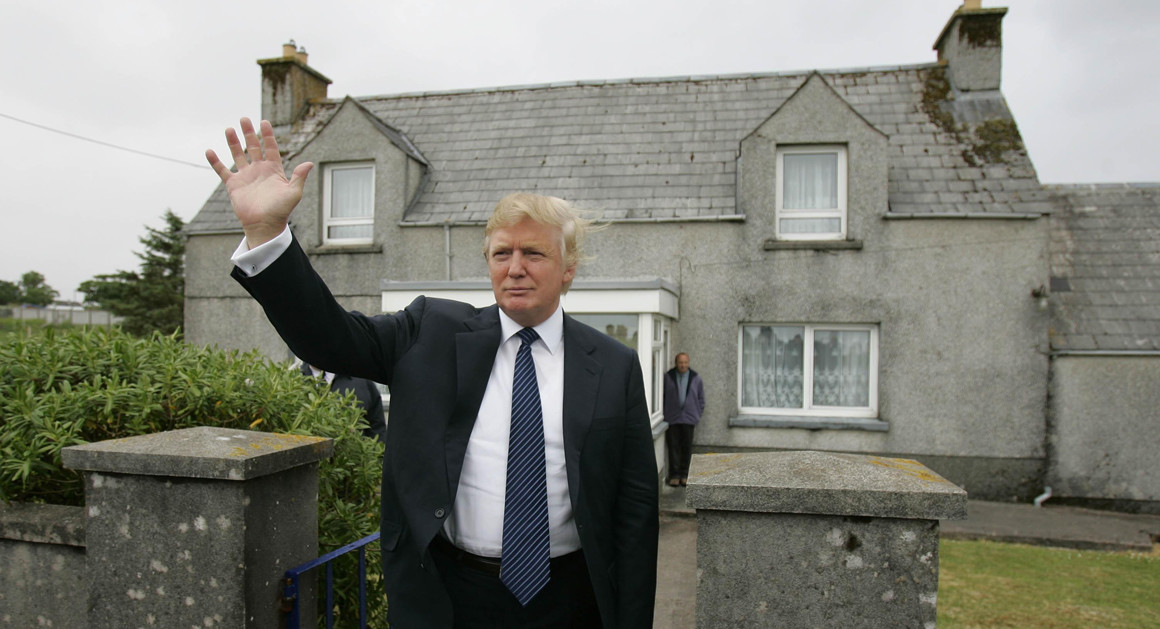 I’m writing to welcome you to Scotland.  I realise that you are engaged in important work with NATO in Brussels, but you are going to be in my country this weekend – and I would like to welcome you.   ‘President Trumps Welcome to Scotland’ sounds like the title of a pipe tune – some would want it to be a lament, others as a march.

As you will be doubtless be made aware of, there are those who will be protesting against your visit.   They will tell you that you are not welcome.  They will hold rallies and even float a giant balloon of you as a baby over London….this is not just a waste of money (£25,000) but a crass and immature stunt which reflects badly on our country. The fact that the mayor of London, Sadiq Khan, has permitted and encouraged this, says more about him than it does about you.  I cannot believe that he would have allowed a similar balloon of your predecessor when he visited.  Doubtless it would have resulted in accusations of racism if such a thing had even been attempted.

Can I also apologise for the hypocrisy of some of my fellow countrymen when they gather to protest against your visit.  They say that it is because of your misogyny and racism, accusations which I am sure you would deny.   But what bothers me is the fact that the US is our strongest ally and a bastion of the Western freedom which allows them to protest freely (and me to protest against their protesting), and they are both showing disrespect to your office and a degree of hypocrisy in their protestations.   You are coming here as President of the United States, not as Donald Trump, reality TV star, and as such the office should be respected and honoured.  The hypocrisy is because most of these protesters were not on the street when the Chinese leadership visited, (nor were they asking parliamentary questions about Chinese human rights) or when other countries with far worse human rights records than the US, have sent their leaders (ie. President Erdogan of Turkey or Crown Prince of Saudi Arabia, Mohammed bin Salman).   I’m not sure what the message that Patrick Harvie in the article above is that will be sent ‘loud and clear’.  But let me say loud and clear that we welcome you as the President of the United States to our country.

As you are well aware welcoming you is not the same as agreeing with all your policies or endorsing all your statements.   We Scots are not good at that kind of flattery and I’m sure you would not want us to be.  For me I would agree completely with your view that the European NATO countries have for too long been relying on America to defend them, and to pay the bill for that defense.  Your complaint in that regard seems spot on.  Can I also commend you for your choice for the Supreme Court – Judge Kavanaugh seems a wise and appropriate choice, his legal experience and Christian values make him a worthy candidate.  I hope it works out.

But there are a couple of areas where I would like to express some concern.  Firstly and most importantly, the stories and pictures of migrant children being separated from their families are abhorrent, and do not reflect well on your administration and country.  I realise that President Obama had a similar policy, but two wrongs don’t make a right.  I also realise that children are often used, but that still does not justify the policy.   One of the great experiences of my life was to visit Ellis island and see the memorial to the many immigrants who came to the US and made it ‘great’ in the first place.  Can you still not be a land that welcomes the poor, the refugee and those who only want to make a new life for themselves?  I realise that you must have immigration control and that you cannot take everyone – but surely you can take more than the 50,000 being proposed.  (the figure for  2017 was 85,000)? The US has a population of 325 million – 50,000 refugees is only 0.002% of the population.  Given that the US is the richest nation in the world and that at least some of the refugees (ie. those in Iraq) are refugees partially because of US foreign policy – it seems you could be a bit more generous.  And could you please take more Christian refugees who are being persecuted from their faith?  You are aware that the number of Christians in Iraq has fallen from more than 1.5 million less than one-third of that?

You say that you support Brexit and Britain becoming independent of the EU – could you encourage our government by making clear that you would be prepared to have an instant trade treaty with the US – one that was advantageous to both countries, whilst respecting our different cultures and traditions?

Let me go one step further and invite you to visit our church in Dundee on Sunday.  You would be as welcome as any other sinner!   I don’t say that to be rude or to make a judgement upon your personal character.  God alone is the judge.   But the Bible teaches us that we are all sinners – in different ways.  That is not to excuse our sin, but to point out that we are all in need of salvation.  I respect your office and you as the President, but in the church we are all equal – you would be as welcome as, but not more than, anyone else.  In our church the pauper is as welcome as the President.

Your mother came from the same Scottish island as my wife – an island which has been shaped and developed by real evangelical revival.  Your country was also founded on the principles of biblical Christianity and was shaped by great renewals and revivals of Christianity.   That is what your country needs.  That is what you need.  Come to St Peters at 11am on Sunday morning and hear the Good News!  You are very welcome,

PS.  It can be done.  Your vice-President Mike Pence popped in (security men et al) into the church of a friend of mine and was well received as a member of the congregation!  See you on Sunday….!

PPS –  You’ll need to get there in good time (11am) as we are usually full on a Sunday morning (evening at 6 there is much more room!)….let me know and I’ll keep a few seats for you and your family!

And this just came out from Paul Joseph Watson –