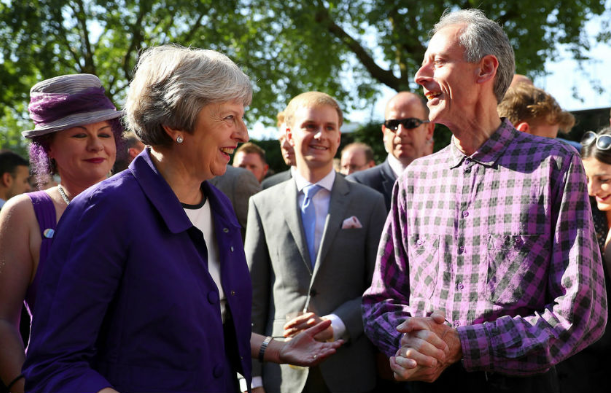 After three months its time to return to our weekly round up of events that illustrate where our culture is at.  Light Engaging Darkness tries to identify general trends in culture (each week we take seven items) and apply some Gospel light to them!  Whether we succeed or not – you can be the judge!  This link is for the previous one – many moons ago!

LED 25 – Brexit and May; The Beast from the East; Self-Identity Gender; The Education Convener and the Law; The Exclusive Inclusive Group; Harassing Prayer; Iceland bans Jews; Robert Plant and Alison Krauss; John Lennox.

The National Health Service is one of the best things about Britain and we rightly celebrate it.   Even this week I have benefited from it (my second home is Ninewells hospital) and I regularly come in contact with it.  My daughter is training to be a nurse, half my congregation seem to work in it (it is Britain’s largest employer) and all of us make use of it. (Can I say to my American friends….you really could do with some socialised medicine!)….We have much to be thankful for…but we also need to recognise that it is in deep trouble and that, unless there is substantial reform, the NHS is unlikely to survive in its current form.  In my own city there is a chronic shortage of GP’s and money.  The morale amongst staff is low and there are considerable cuts taking place (despite official denials).  I was told by senior staff that operations are going to in effect be cut to ten months per year  and that you can only have one cataract operation – which is tough if you have two eyes with cataracts.   Every politician says all the right words – but who is going to act?

Prime Minister May met with Peter Tatchell and other gay activists to give an abject apology and promise them a 75 point action programme and more money.    Mrs May has given in to everyone of their demands and is promising more (sounds like her negotiations with the EU!).  The latest will be the banning of what is termed ‘conversion therapy’.  This excellent article from Peter Ould explains why this ban is such a dumb idea…but facts and reason are nothing to do with the debate here – if Peter Tatchell and co. say it is wrong, it must be wrong.  Expect the usual virtue signalling from the Establishment as they all pile on board as they attempt to prove that they are not homophobic.  Of course the Church of England have joined in the calls to ban conversion therapy (I’m tempted to say that is because they don’t believe in any kind of conversion) and Vicky Beeching is using her new found celebrity in order to campaign against it as well.

The propoganda continues incessantly with the major corporations falling over  themselves as they seek to jump on the bandwagon – Tesco can now be added to the list  Somewhere Over the Rainbow – Corporate Capitalism, the World Cup and the Sign of a Society Committing Suicide  .  Here is an interesting clip from the BBC (warning contains some offensive language)  – have you noted how ‘safe’ comedians are nowadays?  They just parrot the values of the Establishment and act as the mockery leaders for the mob.  How daring to attack the DUP, mock marriage and make up straw man arguments!    Can you imagine how radical and brave it would be for a comedian to make fun of SSM?!

3) No Christian Refugees from Syria?

12% of Syria’s population are Christian.  They are the ones most likely to be discriminated against and attacked by ISIS and their supporters.  And yet in an astonishing revelation – it turns out that almost none were allowed into the UK.  What is even more astonishing is the reluctance of the UK government to release the figures – you would think they were trying to hide something!

An increasing number of schools in the UK are banning girls from wearing girls clothes like skirts – so that they can be gender neutral.  Yep – this really is happening….

After voting to permit abortion and the killing of children in the womb, it now turns out that Ireland is facing a population crisis – with not enough children being born to maintain the population. One can hardly comprehend the stupidity of a contemporary society that seems so determined on suicide.  If you kill your children in the womb – they won’t grow up to be the adults you need!

7) Tim Keller Speaking at the National Prayer Breakfast in the UK Parliament.

This is well worth listening to…a great example of ‘speaking truth to power’.

(In case you missed it – have a look at this interview – which deals with the background to many of the above issues – John Anderson Interview – Where is the West Heading?