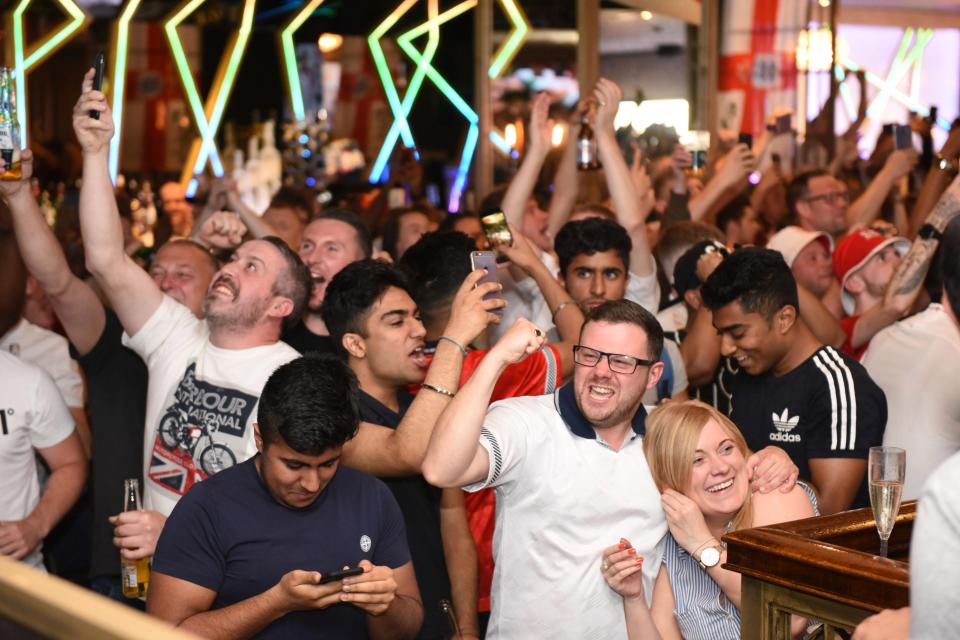 And then last night this happened…

I have been reflecting on this because of my two reactions to both these events.  I rejoiced at both.  Firstly I was delighted that Southgate missed that penalty in 1996 not just because I suffered from ABE (Anyone But England) syndrome, but I just couldn’t stand the English commentators and the thought of having an England win on the BBC for the next 50 years!    So why the change last night?  Some say it is grace….others maturity….but for me it was just good to see Gareth Southgate, now as the England manager, getting his reward.  I find him to be a humble and self-effacing man who is in contrast to many of his more ebullient colleagues.    I also like his team and especially Harry Kane – who could not be more English if he tried!  There was one moment in the match which summed up the whole English team – a player went down in the box, and instead of doing a Neymar and rolling all over the place, he got up and said to the ref it was fine, there was no contact!

Our Scottish civic elites like to boast how we are metropolitan, communitarian  and internationalist, not like the racist English (I keep hearing sanctimonious analyses about how England voted for Brexit because they are racist whereas we are cosmopolitan).  And yet when I look at the crowds of English fans I note that they are multi-ethnic and that white, black, Asian are all as ‘English’ as each other.   I’m not convinced at all that English society is any more racist and insular than Scottish (indeed my fear is that despite all our boasting – we are in danger of being more parochial and petty).   English society has changed.

And Scottish is changing.  There are still plenty people who suffer from ABE syndrome but what I have noted with interest this world cup are the number of Scots who are genuinely supporting England….that is something I did not think I would see in my lifetime…nor did I ever think I would be one of them!

It is however a bit embarrasing when SNP politicians in Westminster play these kind of silly games.   There was a time when I would have smiled at such jolly fun’, but I need to be consistent – I hate it when Tory or Labour MPs in Westminster play games – likewise with the SNP.   It demonstrates a shallowness and immaturity which is embarrassing to Scottish politics.    When I consider the serious issues we face as a country it grieves me that most of our Scottish MPs are under orders (which they will obey) to disrupt and annoy.   Yesterday I was at Ninewells hospital where one of the doctors told me that they will probably only be doing ten months per year operations and only one cataract operation per person – tough if you have two eyes! – and today I hear of the UK governments proposals on fishing – which the SNP should be encouraging and supporting – instead all they can do is carp  – and moan about how they wish we were staying in the CFP.

I don’t care if our Scottish politicians do or don’t support the English football team – I do care if, out of a mistaken sense of superiority and a petty nationalism, they play Westminster games, and don’t get on with  ‘the day job’, which is not acting as lapdogs for the EU, or indulging in fantasy politics – but rather governing our country.   Our health care system, education and economic systems are not in good health.  We want doctors not cheerleaders.

Meanwhile back to the world cup in Russia – which all our experts predicted would be a disaster and boring.  Instead it is turning out to be one of the best organised and most entertaining I have ever seen and has lots of interesting questions  (where did Columbia get all those fans? How did Japan lose?  Is Neymar going to get an oscar?  Can Russia reach the final?  Are France the best team in the world?)  …I will be watching every quarter final….and supporting England!  Hoping for an England v. Belgium final.

PS.  Anything that can get Mrs R into football has to be a good thing.  When I was going out with her took her to a friends flat to watch Scotland play Germany (I think her comment was ‘who are the ones in the white?  They’re the best’).   But last night she actually found it exciting and even asked me this morning – when’s the next one?!  Roll on Saturday…