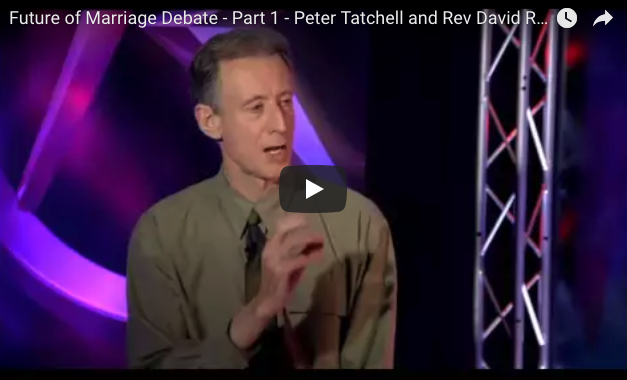 Yesterday we saw how politicians who pass laws which go against Christian social teaching and then promise that of course we will still be free to express disagreement are not to be trusted.  They are incapable of keeping that promise.

Today I want to show further where this is leading. I have been suggesting for some time that the acceptance of different social teachings to those Christian ones upon which our society has been built – would soon result in the Christian teachings being banned.  This was always vehemently denied.  Now – as we saw yesterday this is well under way.

A few years ago I did a debate on Revelation TV with Peter Tatchell.  When we travelled to Malaga to do the debate I wondered why they were based out there.  Part of the reason was the way that things were going in the UK meant that they foresaw being banned or fined by the government for daring to express Christian viewpoints on social issues.  So they moved to Catholic Spain.  Well now that has caught up with them.  I received this report yesterday from the Christian Post

Spanish television authorities have fined the U.K. Christian broadcasting channel Revelation TV amid claims of “homophobia,” because an evangelical pastor advised that parents of children struggling with gender identity issues not fall prey to social engineering.

Evangelical Focus reported on Thursday that Spain’s National Commission of Markets and Competition, or CNMC, found that a broadcast of Revelation TV in September 2017 “could be considered threatening to the dignity of the homosexual and transgender group, although there was no manifest incitation to hate against these groups by the channel that owns the program.”

The fine imposed on Revelation TV was around $7,000.

Gordon Pettie, director of Revelation TV, told Spanish site Protestante Digital that the comments in question stemmed from a discussion on whether Christians should move their children from schools that allow young pupils to identify as transgender.

He continued: “Christians have to wake up and say: listen, we are going to create a political party or join a party to change this madness. We are going to have to do this, because if we don’t, we will have Sodom and Gomorrah at our doorsteps, where they are going to tell you: we want to get hold of those men in there and we want to sleep with them and there’s nothing you can do about it.”

CNMC argued that there was clear homophobia in the statement, and said that linking homosexual and transsexual groups with Sodom and Gomorrah “is degrading for those groups.”  It warned that such content “can generate a state of alarm in the Christian community and prompt rejection of these groups, with negative connotations, openly opposed to the needed respect for human dignity.”

This is astonishing.   It does not matter whether the comment from the pastor was offensive or even wrong.  It matters that the State has banned such an opinion even being expressed because it was ‘homophobic’.  There are significant parts of the Bible that could now be banned – on a Christian TV station!

The irony is that it was on that same station that Peter Tatchell and I had this debate which I now post here – because I suspect that the Spanish authorities would not permit us to have that debate now on the grounds that my views about SSM could be considered ‘degrading’ for some!  Peter – I wonder if this is what you were campaigning for?  The silencing of those who oppose your views.  I don’t believe it is…but this is where you have led us – as you were warned.  If you want to watch this debate I suggest you do so soon – before it too gets banned on Youtube!

And the Q and A