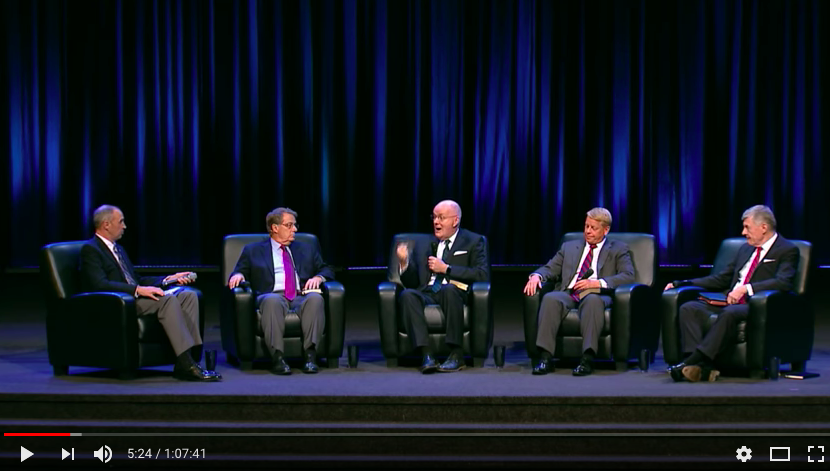 One of the great advantages of living in the modern world is that we are able to listen to conferences on the other side of the world – when they are live streamed as was Ligonier’s West Coast conference in the USA this past weekend.  I was throughly enjoying listening to the wisdom of the teachers who had been speaking. But then came an answer which I found a little surprising and to be honest, disappointing.

If you go to the 23rd minute of the above you will hear a question about the number of Muslims being converted through dreams.

The answer to this was to dismiss all such dreams as false.  They were not from God and we should regard those who advocate this or accept this as dangerous.   God’s revelation has ceased and all we need to do is send preachers – we just need a real person going in with a real bible.  If we accept this then we are opening a Pandora’s box as we cannot even make sense of our own dreams.   It’s also dangerous because it leads to inclusivism (which according to the speaker is a particular danger for Reformed churches) – not so much the promoting of many gods but rather many ways to the one God.   These dreams are probably auto-suggestion – people being taught by those who say they should experience such things, then experiencing them.

These answers were applauded and seem to have been widely accepted.  There was certainly no disagreement.  Thats a real problem on a lot of these panels – I can’t recall when I ever heard disagreement on any of them.  Why not?  I would certainly have challenged these statements  (I guess that’s one of the many reasons I would never be invited!).  The problem with these answers is that they….

2) Add to Scripture –  Given that Scripture is our only guide – we dare not add to it.  So where did God say in his Word that he would never use dreams to communicate to people?  Is this something that can be deduced by good and necessary consequence?  The fact that God no longer reveals himself through giving us more Scripture through Apostles and prophets does not necessarily mean that he cannot, and does not, use dreams to speak to people. Especially those who do not have the Scriptures and who are already culturally pre-conditioned to believe that God .

3) Dismiss Testimony and Experience without warrant –  Experience should not be our determining authority – but it should not be ignored either.  I have known Muslims (and others) who have begun to seek Jesus because of a dream that they had.   The dismissal of this as just auto-suggestion is more than a little illogical – the argument could just as easily be claimed that because some Reformed teachers say that dreams can’t happen, people won’t experience them.  Arguing from experience or lack of experience works both ways. I am an experiential Calvinist.

4) Are illogical – The level of ‘reasoning’ really surprised me.   We should only send real people with a real bible….so I guess Ligonier won’t bother with the internet, radio, tv or other means?!   If we can use the internet can the Holy Spirit not use our subconscious? I am not decrying or denying the necessity and need for preachers and missionaries – how can they hear without a preacher? These are the ordinary means but are we really saying that the Sovereign Lord cannot use extraordinary?

What Pandora’s box argument is being opened?  That the Sovereign God can use his Spirit to encourage Muslims to seek him?

The attempt to demean the experience of others by joking about the confused nature of normal dreams was an irrational argument because no one was claiming that we are to interpret our own confused dreams as some kind of divine revelation.  The question is whether the Holy Spirit can use the subconscious human mind to bring the truth into the conscious, through supernatural means.  Do we no longer believe in the supernatural?

The attempt to use the slippery slope argument was also an unworthy argument.  Accepting that the Holy Spirit can provoke people to seek Christ through dreams is not the first step to ending up with a ‘many ways to God approach’.  I would suggest that there is a far bigger danger facing the Reformed churches than ‘inclusivism’ – it is exclusivism.  There is an exclusivism that is right –  excluding other gods and other ways – but there is an exclusivism that is wrong –  excluding methods and people God is using.

5) Are Unreformed – The Reformed faith often has a bad name.  Sometimes in some of its cultural incarnations it comes across as a cold, cynical Calvinism which reduces Christianity to a formula and an intellectual argument.  The working of the Holy Spirit, the felt presence of Christ and the supernatural (other than in regeneration) are sometimes relegated to a very minor role, if at all.  Someone once argued that if you took the Holy Spirit out of our churches 90% of what we do would carry on as if nothing had happened.  I don’t think that this is the historical Reformed view.  People like the Puritans, the Huguenots and the Scottish Reformers were more open than this.   I wonder whether this is more a cultural/personal position than a theological one?   There are other American Calvinists involved in The Gospel Coalition such as John Piper and Matt Chandler who would not hold to this somewhat extreme cessationist position.

It was intriguing to me that the only person who said nothing was the Celt from Wales!  Celtic Christianity would not recognise the extreme cessationist position being argued.  I suggest you read The Secret of the Lord by Dr John Kennedy as an example.

“It is pretending to know,” they say, “what is not revealed in Scripture.” This sounds well. It seems, at first sight, due to the Word of God, as the only complete revelation of His will, that we should at once regard as false all information regarding the mind of God not derived directly from the plain import of Scripture. They have never gone beneath the surface in their thinking on this matter, who have not discovered the extremeness of this view. But, backed by this false assumption, some will quote, with an air of triumph, the pretensions to inspiration, the claims of the gift of prophecy, the faith in dreams and visions, of those whom all acknowledge to have been deceivers and deceived. To minds that have always kept far off from the realities of a life of godliness, that look from a distance on the communion of His people with the Lord, the difference between the baseless pretensions of deceivers and the God-given privilege of the righteous is utterly impalpable. All kinds of intercourse with the Invisible are classed by these together, and to them all who claim the privilege of communion with the Lord appear as deluded fanatics”

It may be that I am just a Scottish Puritan Highland mystic!, and am blinded by my own cultural experiences.  But the only way we can judge these things is not by our cultures, tribes or networks.  We need to go to the Scriptures.

Can we say ‘God Loves you’ to the non-Christian?

Speaking of which there was one other answer which caused me to question – when answering the question about whether God loves everyone the following story was related.  ‘God loves you’ says the Christian.  ‘Well, I’m in good shape then’ replies the non-Christian.  We were told this story I assume to prevent us saying God loves you.  We were told that there was no comeback to that statement.   But there is an obvious one.  Rather than say I’m not going to say God loves you….I will simply ask – ‘why do you think you are in good shape?  What are you doing with God’s love?  The fact that you are rejecting it shows that you are in very bad shape!

Can we say God loves you to everyone?  Can we say ‘Christ is dead for you?’  Can we say ‘there is good news for you?”  Perhaps a little historical theology might help.  Look at the story of the Marrow controversy in Scottish church history and read Sinclair Ferguson’s The Whole Christ

I love Ligonier and I love the writings of all the men on this panel.  But on this occasion I think that the answers given and applauded actually show something that is wrong within the Reformed movement, and the attitudes displayed could do harm to the Reformed cause.  We need to open ourselves to being challenged a bit more and not just have panels on which we all agree about everything.

I accept that I may be wrong about this and look forward to being corrected (in love)! But meanwhile until then the next time a Muslim comes in my church and says ‘I’m here because God gave me a dream and told me to come to this church’ I’m not going to turn round and say (or think) your dream was false!  I’m going to welcome him, tell him God loves him and proclaim Christ to him!