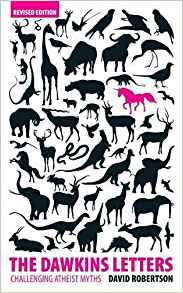 Whilst in Australia I have been meeting a lot of people who have read The Dawkins Letters    I was sent this testimony of Richard Morgan, who was converted through reading it.   He gives a lovely talk in this video…

You can hear the Unbelievable programme he mentions here –

We added this chapter to The Dawkins Letters

What a relief it was to become an atheist. I had become worn out and frustrated by my fruitless search for God. I had studied holy writings from three different continents. No God there. I had tried prayer and ‘positive thinking’ as if they were the same thing. I had wrestled with the problems of theodicy without even knowing that the word existed. I felt that I had sought God everywhere – in the cosmos, in my neurones, in my bank account. Everywhere. Or so I thought.

Then I read The Blind Watchmaker by Richard Dawkins. What an immense relief it was to discover that my search for God and Meaning was bound to be frustrating and disappointing, could only lead me up blind alleys, because God simply didn’t exist. How obvious. Evolution explained everything.

The notion of God (the supreme alpha-male) was a side-effect of the evolution of the human brain. Attributing ‘agency’ was an effective survival strategy. The God that you attributed agency to was uniquely dependent on the culture into which you had been born. Religion was an exercise in social manipulation and power. Believing information received from non-verifiable sources (revelation) opened the door to all kinds of horrendous excesses from Inquisitions and witch-burning to flying planes into towers and fathers committing ‘honour killings’ and a president lying to bomb and massacre innocent people in Iraq. Man had invented God in his own image. God was the ultimate comfort blanket. Science was leaving no space for the ‘God of the gaps’. Talk of Eternal Life was in fact just a morbid obsession with death. Even monkeys had invented The Golden Rule. Science and Reason alone revealed Truth.

An ‘Omnipotent God’ was an impossible notion anyway. Religion was ‘the opium of the people.’ Love, self-sacrifice and charity were just the misfiring of evolutionarily selected survival mechanisms. Everything could be explained. There was just simply no need for the God delusion any more. Hallelujah!

Many years later, in November 2006, I discovered the internet site RichardDawkins.Net, and my very first internet Forum/Discussion group. What a joyous experience that was for me at the beginning! Discovering other people’s ideas on atheism, being able to interact with them, making friends of some of them, and from time to time being presented with some scientific discovery or irrefutable philosophical reasoning – this was what life was all about .

One of the favourite sports on RDNet was insulting and mocking Christian authors who had the gall to write books refuting Dawkins’ The God Delusion. One thread on the site was devoted mainly to David Robertson’s The Dawkins Letters. I mention this, because it was this same David Robertson who spoiled all the fun for me. He replied at great length, with considerable politeness and restraint to a very long ‘review’ of his book The Dawkins Letters. My first reaction was, ‘Poor guy, why is he wasting all his time doing this?’ My RDNet friends had the answer for me, ‘Attention- seeking’. (Ironically, I was to discover that they weren’t entirely wrong. Except that DR wasn’t seeking to draw attention to himself…) I

n spite of the abuse, DR kept coming back. He kept answering the criticisms. Several of us started wondering, ‘What is wrong with this guy?’ The ‘royal decree’ on DR was that he was a ‘dishonest, unpleasant, unbalanced; un-Christian fruitcake’, so why did we all persist in engaging him in discussion? Not only did he argue with us, from time to time he wished us well and quoted Scripture! But (and it’s a big ‘but’) many RDnetters accused David Robertson of being a liar. This surprised me, but I didn’t dare say so on the site. I couldn’t risk being excommunicated as a troll. ‘Get over thyself.’ ‘Get thyself a life.’ Those were our commandments. I read and re-read DR’s lengthy comments. I found all the evidence I needed to prove that he was probably a deluded fruitcake, but none to substantiate the accusations of being ‘mean’ or ‘evil’ or best of all ‘a liar.’

The poor deluded ‘WeeFlea’ asked in all humility for someone to point out precisely where and how he had lied. I got brave and posted, saying, ‘Whatever else we may think about DR, I’m sure he does not wilfully and knowingly tell lies.’ My friends, of course, shot me down in flames. So I tried to accept that the lies were there, but that I was intellectually incapable of perceiving them.

Then came that terrible moment, when the site administrator published an article about some deluded Russian prophet who had tried to commit suicide in a particularly clownish way when his prediction for the date of the end of the world failed to come true. Even as I was reading the article, I started having forebodings about the kind of comments that I was likely to find afterwards. And my worst suspicions were confirmed. Much laughter. Considerable mocking and jeering. And there were even a couple of posters who regretted that the fallen prophet had failed in his ‘attempt’ to put an end to his life. They made a joke of wishing somebody dead. I expressed my shock and disappointment in a couple of posts.

And then I went too far. I wrote and signed my own RDNet death sentence when I said: ‘…and apart from all that, don’t you guys realise that you are giving David Robertson and his ilk stuff to use against us as atheists? Already they accuse us of being soulless and unfeeling! I am sure that David Robertson would never, ever laugh and gloat over a suicide attempt by an atheist. Can you imagine him saying “Serve him right, dumb atheist! That’s where rejecting Jesus gets you! He deserves nothing better. Psychotic, godless fruitcake!”’

Now there are many fine and highly intelligent, articulate members of RDNet. A small number of them timidly came out and defended me. But one of the most respected of them, a doctor, contented herself with quoting me and adding ‘LOL’. After a few faltering attempts to justify my position I decided that RDNet was not where I wanted, or needed, to be. The cognitive and affective dissonance was just too much for me. So there I was. Alone again. No God. Rejected by atheists.

Now I have another confession to make here. Whenever David Robertson posted a long comment on RDNet, I had developed the guilty habit of printing it out, and sneaking onto the balcony to read it with my morning coffee. So one morning, I took out my copies of his posts and re-read them. What did I have to lose? I found nothing of apparent interest. DR was clearly stubborn, persistent, polite, but still deluded.

As I was reading, my thoughts turned to the honey bee and the invisible, ultra-violet landing pads on the petals of certain flowers that guide the bee to the pollen and the delicious nectar that awaits the happy apidae. The fact that I can’t see these landing pads doesn’t mean that they don’t exist. Just as the fact that the bee can’t see the colour red doesn’t mean that he can fly through a tomato. I have my five senses and a brain that works in a particular way to process what my five senses pick up. But that doesn’t prove that anything that can’t be captured by my five senses doesn’t exist. If ever, in a science fiction journey, I came across a universe where living beings had ten senses, well, I could only have half as much fun as they did.

The wonderful philosophical explanations and arguments that I read on RDNet had fascinated me, filled me with awe and admiration, and I even understood some of them. But they always left me with the uneasy feeling of, ‘Well, yes, that’s what brains do. Ducks quack; the French complain, and the human brain processes information. However sophisticated my reasoning processes, they will still be limited to the capacity of my brain. But does that mean that anything that cannot be perceived by my senses and processed by my brain, therefore, doesn’t exist?’ I started ruminating about all this during that fateful weekend.

But ruminating is not all that I did. I committed the unforgivable sin: I started posting on the FCoS Forum. The Free Church of Scotland. A verit- able den of theists. I defected. I spoke about being a sad atheist, about my desire to be able to believe. Then, on Saturday, April 12th 2008, in reaction to my posts, FCoS’s ‘resident fruitcake’ asked me two questions which were to change me life: ‘Why don’t you believe in God?’ and ‘What could make you believe in God?’

My knee-jerk reaction to the first question was, ‘That’s a dumb question.’ And to the second, I had two instinctive and spontaneous answers: 1. I don’t know.   2. Certainly not proof and evidence.   At that moment, the words that I had learned many years previously and that had always provoked a terrible sensation of longing in me, came into my mind: ‘We can love Him, because He loved us first.’ And my universe exploded. Lights came on, prison doors opened, and scales fell off my eyes, the whole ‘Amazing Grace’ thing. As I considered my perception of life, the universe and everything, it was literally as if I had been looking at a two- dimensional image in black and white, and in an instant everything became three dimensional and Technicolor!

A short time later, I went back to my DR documents and was amazed to discover that the words that almost leapt out at me from the pages were the Biblical references that had so embarrassed me before. Not David Robertson’s words – the Word of God. The ensuing 48 hours were very intense, as my brain started processing tons of previously stocked information in a different way. The Bible, that I had previously studied so much that I couldn’t read an ‘And it came to pass…’ without having a migraine, became exciting. Meaningful.

Today, I feel no resentment towards my RDNet correspondents. After all, it was among the atheists that I found salvation. An insistent, obtuse Scottish clergyman kept ‘coming back for more’. Not only defending his arguments, but boldly confronting atheists with the Word of God. A voice crying in the wilderness? Perhaps. But even in the wilderness, perhaps somebody is hiding behind a rock, listening. I was. ‘For the word of God is living and full of power’ (Hebrews 4:12)

It is so good to be loved without having done anything to deserve it. It is so good to raise my eyes from the science laboratories and the books of philosophy and start to behold the glory of God. Science and philosophy are wonderful manifestations of the enormous capacities of the human mind. But the Word of God is Truth, and truth is what it took to set me free. My journey in faith begins. Watch this space.