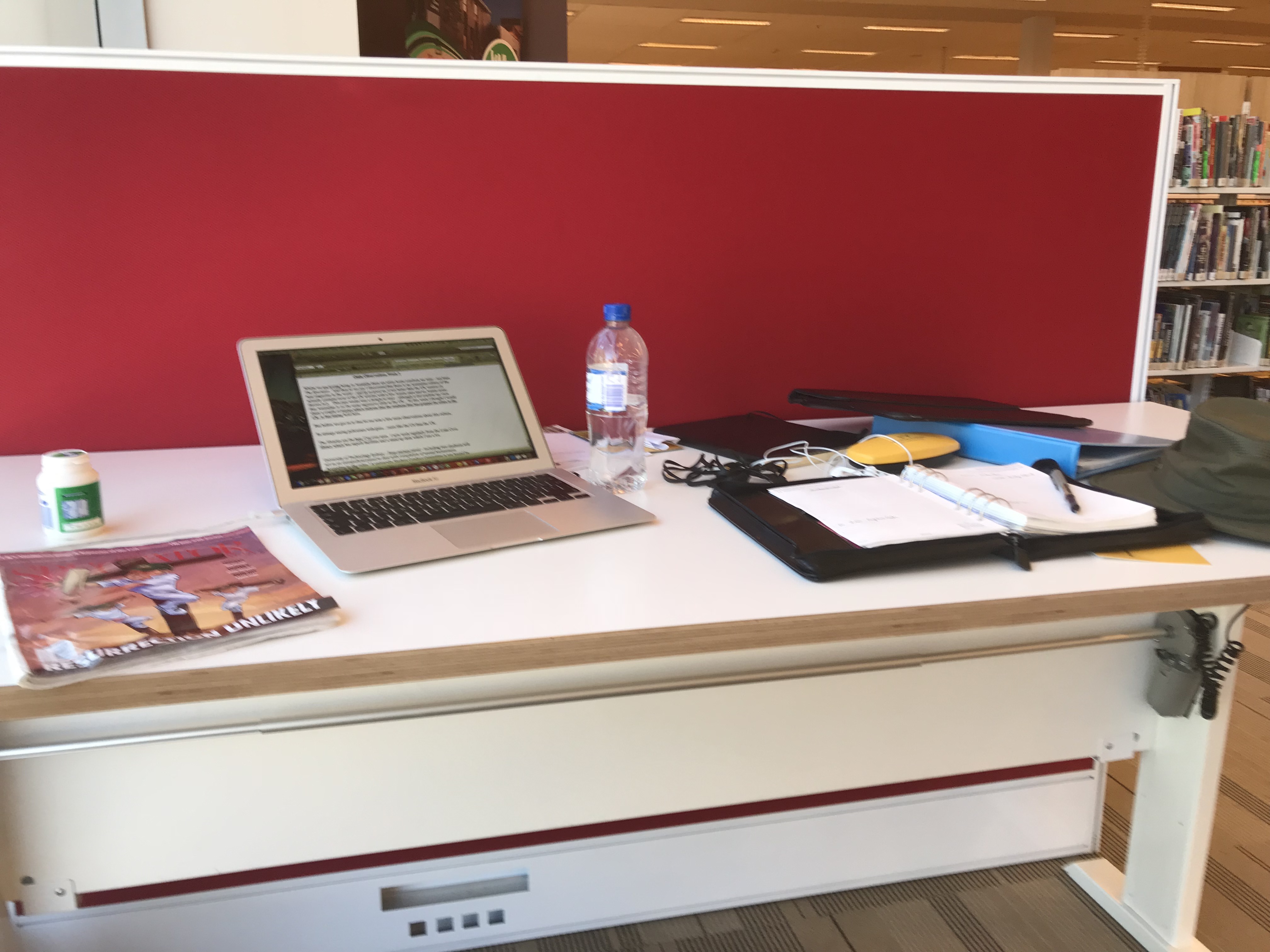 Whilst we love being in Australia there are some home comforts we miss – not least The Spectator. But to my joy I discovered that there is an Australian edition of the best magazine in the world – and it’s as good as, if not better than the UK version (it actually contains most of the UK articles with a few Aussie ones and an Aussie cover thrown in!).   This past weeks was a delight to read – although it did confirm my view that Australian is on the same regressive slide as the UK.   So this week I thought I would share a couple of stories that indicate that the madness that has gripped the elites in the UK, is fast taking hold here.

But before we get on to that let me note a few more observations about this culture.

Its strange seeing policemen with guns…more like the US than the UK.

The libraries are the best I’ve ever seen. I now work regularly from the Loan Cove library which has superb facilities and a stand up desk which I love using….

The weather is hot – apparently this is autumn and the temperature has reached over 30 degrees several times in the past week. The beaches and houses in coastal Sydney are just beautiful. It’s such a shame that they are so expensive and that the poor are being driven out (and forced to commute in to serve the wealthy in their jobs).

The Sydney transport system is superb – especially if you use the Opal card. It can also be quite funny. We were on the ferry from Circular Quay to Rose Bay when the following announcement came over the tannoy “this is the ferry to Rose Bay. Stopping at… Rose Bay. And nowhere else. So if you are heading for the Greek islands or anywhere else in the world – you’re on the wrong ferry. Get off!”

Whilst were on that very there was an interesting snapshot of contemporary life. We were going past some of the most gorgeous and stunning scenery in the world – including the Sydney Harbour Bridge, and Sydney Opera House. Yet there was one muscled, tattooed man who was only concerned with taking numerous selfies of himself, standing up and posing on the chair, whilst ignoring all around him. Modern life!

Onto the three stories I picked up;

In the new climate of liberal hate/intolerance things are moving on quickly.   The University of Technology Sydney has set up a four-person panel, including two students, who will act as an extrajudicial panel to deal with complaints of sexual harassment.  What’s wrong with this? The problem is that the definition of what constitutes sexual assault is vague. The article reports it could include kissing. Even more chillingly the rules for this panel state: “A university Student Conduct Committee is not bound by the rules of evidence and may inform itself on any matter it thinks fit”.    Just stop. And think. Here is a revolutionary tribunal (sorry – ‘extrajudicial panel’) which has the power to expel students and it ‘is not bound by the rules of evidence’.   This is the new liberal version of social justice – evidence is not essential, only feelings, perception and political correctness.   Farewell justice and freedom.

I have been reading a lot about Aboriginal history – it is fascinating and horrific. I will almost certainly write more about it later. The way that the indigenous peoples have been treated over the past couple of hundred years is a shameful episode in Western history. But of course now the liberal elites are jumping on the bandwagon and proclaiming themselves the saviours of indigenous culture. I find it a little ironic that the LGBTQIAS movement is claiming to be the same as that of the indigenous people. I wonder what the various aboriginal groups thought about homosexuality?!

Can you imagine what would happen if I told you that I was in a country where there were signs that said, ‘no blacks here’? Or ‘this is a whites only space’. I guess you would think of apartheid South Africa or Mississippi in the 1950s. But this is Australia today. There is segregation according to race and colour of your skin.

In NSW the Liberal government has told every hospital emergency department to have a ‘culturally appropriate space’ or ‘designated Aboriginal waiting room’.

Queensland University created an Aboriginal only computer room and students who complained were hauled before the Human Rights Commission.

The City of Melbourne’s art studio displays posters which state “this is a safe blak space…if your blood is of the settler, please respect our request not to enter” Doubtless the justification for this is the concept of separate cultural development – i.e. apartheid!

Smith and have found themselves a new hate figure – the best rugby player in the world, Israel Folau – whose crime is dreadful.  He apparently had the temerity to say that he was against same-sex marriage and then was caught out saying that he believed homosexuals need to repent or they would go to hell. The OTT reaction to this is actually enormously indicative of the whole society, so I’m going to leave commenting on it for another couple of days until I can do some more research.  Is he a homophobic hatefilled bigot, an unwise Christian who doesn’t know how to speak the proper language, or a faithful Christian who is being attached for his faith?  We will find out… Meanwhile I will leave you with a bit of madness from the old country:

Two women went to a South London swimming pool where they self-identified as men in order to take part in a men only swimming session as a protest against proposed changes in the gender laws.   They were stripped to the waist wearing only trunks and a pink cap. One elderly man asked if we knew it was a male only night. ‘I am a man’ she said. ‘Oh really’ he replied and got on with his swimming.  Their point was made. Where will all this end?