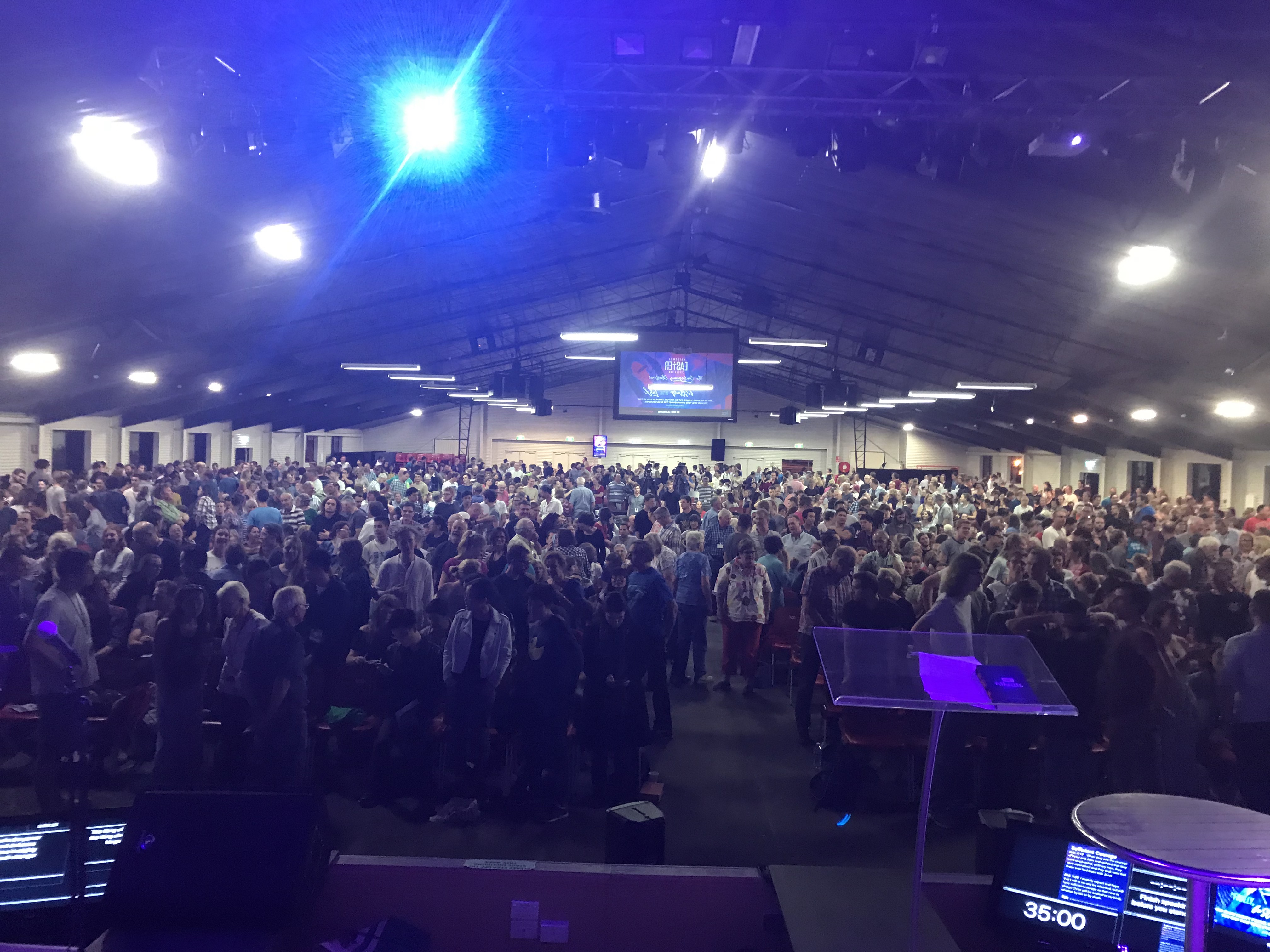 We have just returned from The Katoomba Christian Convention – an interdenominational Christian conference that has been held in the Blue Mountains since 1903. They have a large centre and run several conventions – KYCK (high school); Oxygen (leaders); Onward (apologetics and evangelism); Basecamp (men); One Love (women); Next Gen (Youth and Children’s leaders) and Easter. It was this latter that your truly was speaking at this past weekend.

Last year I enjoyed speaking at Onwards in Sydney but this was a different ball game altogether. I don’t really think that I am a convention speaker (I’m not really in that league), and I have mixed feelings about conventions anyway – especially those that have been ongoing for many years. The KCC Easter Convention is the kind of event that families have attended for generations – indeed the chairman of the Easter event, Steve Kryger, was someone who first came as a child. It is also the kind of event that can become a bit repetitive, formulaic and traditional. When people have enjoyed it for years they want to keep it the same – but sometimes that can exclude others from getting involved. In the UK, the Keswick convention has faced up to this and seems to have successfully reinvented itself, without throwing out the baby with the bath water.

So how was KCC?   I loved it.   It wasn’t so much the numbers (although preaching to 2,000 enthusiastic adults was wonderful) but rather the people, ethos and general sense of the Lord being at work in our midst. Having been to many of these kinds of big Christian conventions it is easy to become cynical. But I found this weekend incredibly encouraging and uplifting.   Because of:

The teaching and preaching –

was biblical, Christ centered, contemporary and practical.   Dave MacDonald (a pastor from Port Macquarrie who has survived stage four cancer – and author of Hope Beyond Cure), gave four good addresses from Hebrews. The latter on Hebrews 13 was superb – and hit the nail on the head directly for me – it is the best conference address I have heard for a long time.  Mike Raiter, a trainer of preachers from Melbourne, gave three excellent talks – he is a winsome and helpful communicator of Gods Word.

I spent a morning with the 15-17 year olds. It was my favourite part of the whole weekend. We just did Q and A. Their questions were intelligent, lively and they themselves were fine examples of Christian young people. They did my heart good. They are a precious resource who need to be taught, challenged and encouraged – not patronised, spoon fed and beaten down!

The Youth Praise – with optional bare feet!      The Youth Tent

it was reverent, joyful, biblical, skillful and balanced. You could hear the congregation as well as the band! I was particularly taken with some of the City Alight songs that I think we should use in St Peters.

There were only a small number of indigenous people but those I met were fascinating and wonderful people. I was challenged listening to their stories and trying to grasp some of the issues they have faced within the church and culture. I think that they are a great asset to the Church of Jesus Christ and I hope and pray that other Christians here will realize the treasure and resource they have in their aboriginal brothers and sisters (73% of whom profess to be Christian)

Ruth is an elderly missionary who has served for many years in Somalia. She spoke with humour, grace and clarity about her experiences – not least the horrific subject of rape. It was a humbling experience to preach Gods word after hearing her speak.

Patrica Weerakoon is a lady I had heard of, but the half had not been told! In her short talk this 70-year-old Sri Lankan lady who described herself as a Christian sexologist and writer, managed to challenge, provoke and encourage in a thoroughly stimulating and entertaining manner. I loved her…and hope and pray that we will make good use of her work in the UK

Sam Chan is a bundle of energy, intelligence and godly enthusiasm. One of the best

evangelistic speakers I have ever heard. I was sitting just behind his family and it was lovely to see his very young children beam with pride as he mentioned their mum! I have just bought his book on Evangelism in a Sceptical World (review to follow!

As I said I am not really a conference speaker. It’s not that I’m bothered about the size of the crowds, it’s just that I don’t think I’m really that good a speaker and to reach everyone (or most people) in a 2,000 crowd isn’t an easy task. I am also told that I can be quite direct and provocative (although believe me when I say I really don’t want to provoke any one else!) and have a style that is a bit like Marmite (in Australia – Vegemite) – you either love it or hate it. For me I just simply pray two things – firstly that I would be faithful to Gods word and secondly that some people would be helped/challenged/changed/converted.   I did not enjoy speaking on the Friday night, thought the Saturday was better and loved the Sunday evening.    It was gratifying to speak to people who had been helped. I think of the Muslim refugee (yes- attending a Christian conference), the young graduate who came with their parents to talk about whether their faith was real or just something they grew up with, the young man who said he had just been converted the previous week, and the church leader who felt that his situation had been described perfectly. To be used in any way is humbling and all that I can ask for.

Dave and Fiona MacDonald, Annabel and myself, Mike Raiter, Phil and Jill Wheeler, Marie and Tace (our cooks), all stayed in the same house. Sometimes there can be a little bit of tension between speakers – all those Alpha, (usually), males. But I felt we got on well. From my perspective they were all fine Christians with individual personalities and gifts – who were just seeking to serve the Lord. It was a privilege to share a home with them for the weekend.   I should add that it was a joy to have Annabel with me for the whole weekend. She is my main support!   We were both introduced to the whole convention, but because Annabel does not like public speaking she did not say much – which lots of people complained about because the little they heard made them realize what they were missing out on!

Katoomba, Leura and the Blue Mountains have some of the most beautiful scenery in Australia.  They also have one of the best shops in the world – The Hattery.  It’s a fabulous hatshop which sells some great hats.  Its also the only hatshop in the world that I have been to where there was a hat that was too big for my head!  I spoke to an assistant who knew what the problem was with both the size and shape of my head – and so of course I bought a hat!  Perfect for the weather here….next time it will be an Akubra!

The Coffee and the Bookshop

The coffee every morning was outstanding (if you got the paid stuff!) and https://www.facebook.com/plugins/video.php?href=https%3A%2F%2Fwww.facebook.com%2Fthewanderingbookseller%2Fvideos%2F1875126949204836%2F&show_text=0&width=317“>the bookshop is probably the best bookshop I have seen at a convention – lots of excellent books at (for Australia) reasonable prices.  It was good to see that both the coffee and book stores did a roaring trade.  One interesting thing about the coffee was that as you were standing in the queue, they came up and took your order and then put your name on a coffee lid….it may have taken some time but at least you knew your coffee was secure and coming – a bit like having your name written in the Lamb’s book of life.  Heaven may be a time coming but it is guaranteed!

KCC is a well-organized machine. I’m sure there are the usual tensions and troubles that exist in any organization run by sinful human beings – but these are sinners saved by grace and they know what they are doing. It’s a spiritual gift that many Christians don’t seem to be praying for – but there is a spiritual gift of administration. The leadership of KCC seem to have it.  Jonathan Dykes, Phil Wheeler and the team are impressive.

The local newspaper carried a headline article about KCC seeking permission to build a $65 million facility on their current site.   It had to be explained several times that KCC does not have $65 million and is unlikely to spend anywhere near that over the next 20 years. But they are wisely getting set up for all possibilities. There are some who question whether it is wise to spend that amount of money on a Christian conference centre. It’s a good question. On the one hand we need to be good stewards of the Lord’s money. But when the Australian government are talking about spending $2 billion on a stadium to serve the idols of sport, I don’t think it is unreasonable to see KCC as a good investment for the advance of the work of the kingdom – providing they keep their nerve and stick to the Bible.

of the weekend was ‘courage’. In an increasingly confused and hostile secular world (for example the Australian SSM referendum was one of the most vicious and bitter against Christians that I have seen) how are Christians to stand.   Despite (or because of) all my positive comments above, I still think that there are many dangers and troubles (internal and external) facing the Australian church (as well as opportunities). I wouldn’t presume to say what they are – although just applying the Bible’s warnings seems to have hit a few home truths!   I think the Australian church has an open door/window to turn the tide and be a force for good throughout the world – but that is only for a limited time. They too need to the same renewal, revival and reformation we do – otherwise they will fall down to our level!  KCC could be a key part of that if they are willing to grasp the nettle!

But that’s for another day. Meanwhile I am deeply thankful to the Lord for the privilege of being here…and if the people at KCC got as half as much out of it as I did – they are a blessed people!

The New Hat, the renewed wife, and the two year old grand daughter….

Australian Days 2 – The Blue Mountains – where Hippies and Christians Meet