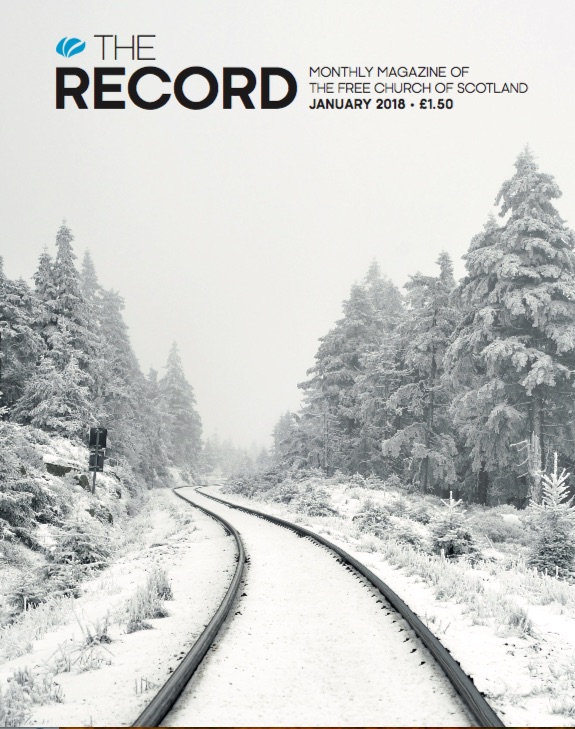 The January Record is just heading to the printers – lots of good stuff in this month – here is a foretaste of the editorial.  Get your copy of the complete magazine from your local Free Church, or from the Free Church offices…

So writes Doug Gay in his fascinating book Reforming the Kirk, the Future of the Church of Scotland. He is right. We should be concerned about the state and fate of the whole church of Jesus Christ in Scotland – not just the Church of Scotland. In fact we should be more than concerned – we should passionately care. Which is why I am going to break an editorial convention – that one must never comment on another denomination in your own magazine.

Yes we are deeply concerned about the state of the whole Christian church in Scotland. I will leave it to another time to discuss the Catholic church rejoicing that it is now the largest church in terms of attendance, and what are known as the smaller conservative Presbyterian churches (they think the Free Church has gone to the dogs anyway). The Scottish Episcopal Church are going through their own version of the traumas and disturbance hitting the wider Anglican church. And the charismatics are as confused and messed up as the rest of us!

“Who cares for the Free Church compared with the Christian good of Scotland?”

It is for that reason that for several years I have been studying, observing and writing about the Church of Scotland. I have been appalled at the schisms within Scottish Presbyterianism. The old story of the Scotsman being rescued on a desert island being asked – “why have you built two churches?” “Oh, the first is the church I go to, and the second is the church I don’t go to”.   Because we are biblical Christians we believe in unity and so several years ago the Free Church did look seriously at the possibility of the Free Church returning to a renewed and revived Church of Scotland. But it was not to be. Mainly because of the fact that the Church of Scotland is now in free-fall and the reason for that free-fall.

The Church of Scotland is in terminal decline. In 1956 there were 1,319,574 members in the Kirk. Today it is a million members less.   That might be ok if we were talking about a Kirk that is getting rid of the dead wood, cutting back to the core, committed people and reforming itself. But that is not happening. In the many years I have been commenting on this I have been told that I am too negative and pessimistic and that things are not as bad as they seem. That is true. They are worse.   The Kirk is dying and unless there is a resurrection it will over the next couple of decades fade away.

Why is this happening and what can be done? Doug Gay points out that some ‘theological conservatives might name it as judgment for various kinds of apostasy” before somewhat snidely remarking “various Free Church of Scotland commentators could be cited here, some of whom I will not dignify with a citation”!   We don’t need to be dignified by others citations, but it nonetheless remains the case that the primary reason for the decline of the Church of Scotland is not the secularistion of society – it is the secularization of the church. The proposals for ‘reform’ in Gays’ book are a great example of the proverbial re-arranging of deckchairs on the Titanic.

Doug Gays First Chalmers Lecture on which his books is based.

What about the Free Church? Are we any better? In theory yes – after all we hold unswervingly to the Bible as the Word of God and we have not abandoned our Confessional theology. But it is all too possible for such to be merely outward conformity, lacking heart, reality and above all the Spirit.  Whilst we mourn over the Church of Scotland and long for its renewal; our primary concern is the cause of the Gospel in our beloved land. The question is whether the Free Church is fit for purpose (together with other churches) to pick up the baton that has been dropped by the Kirk. That is a question for next month. Meanwhile we pray.

Great Joy for all the People – The Christmas Record