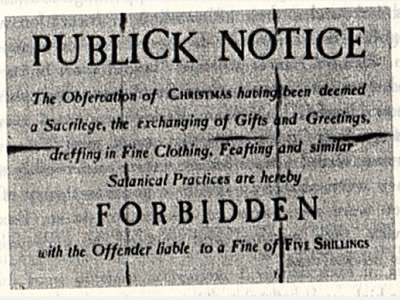 If you are reading this on Christmas Day – Happy Christmas….now get off your computer/phone and go and do something less boring instead – like eating turkey, watching the Queens speech or washing those dishes!   Maybe the computer isn’t such a bad option?

Christmas is not universally celebrated. If you are a Jehovah’s Witness then today is just a normal Monday.   If you are in a Christian school in India you were warned last week by extremist Hindu nationalists that you celebrate Christmas at your peril.   And there are a small number of Christians who as a matter of principle will not be celebrating today. Why? Because they don’t believe it is a Christian festival and they celebrate their freedom not to celebrate something that God does not require them to.

There was a time when Christmas was either banned or hardly celebrated in Scotland. It was the Scottish Reformers who banned it as a Popish festival in 1560…although the ban was lifted it was not until 1958 that it actually became a public holiday. But it wasn’t just the Scots. In 1644 Oliver Cromwell and the Puritans banned it in England as well ordering that its ‘carnal and sensual delights’ (I think they meant brussels sprouts!) be stopped.   This ban by the way led to the development of a character now considered essential to the days celebrations- Father Christmas. A satirical pamphlet was published in 1652, which showed Christmas as an old man with a long beard. In 1658 another satirical pamphlet gave the old man a name – Father Christmas!

Of course it is easy to mock from a safe distance. The situation is not quite as black and white as we like to assume. The late great Christopher Hitchens argued that the Scots banned Christmas because Scots Presbyterians were so against partying and drinking. He clearly had never been here on Hogmanay! I remember as a child thinking that New Year was far more important and exciting.

The paradox is that we did celebrate Christmas but more as a secular holiday than a Christian one. Christmas is primarily seen as a time of being with family, giving gifts and feasting and nothing wrong with that. Sometimes when I see the exploitation and farce of much of todays Christmas celebrations I am tempted to think that our forefathers had a point! To have the birth of Christ associated with such excess, greed and materialism does border on the blasphemous. To leave Christ out of such a Christmas is not a bad idea – but perhaps we need to change Christmas by bringing Christ as the central focus of the festive season.

It’s only in the past few years that my church has had a Christmas day service – and it’s very much considered an optional extra.   In more recent years though I have come to appreciate, not just the evangelistic opportunities Christmas provides, but also the refocus in my own heart on the sheer wonder of the incarnation. I believe that our forefathers got it wrong and that Christmas is a wonderful time of year to remember the birth of Christ and to consider the light that has come into the darkness.

Veiled in flesh the Godhead see,

Pleased as man with man to dwell,

So I feel doubly blessed. I get the best of both worlds.   I can still look forward to Hogmanay and New Year but now I’m of to enjoy my Calvinist Christmas…to celebrate the God who gives us all things richly that we may enjoy them – and above all to marvel at the One who is. The Greatest Gift. Go and do likewise!

This article was published in Christian Today on December 25th 2017

If you want some further Christmas reading try this wonderful article from NT Wright – God In a Manger, The Message of the Gospels and the Problem of the Virgin Birth

And this was published in The Times…from Giles Coren

Looked at in the cold light of late 2017, the Nativity story available in the Authorised Version seems old-fashioned, reductive, sexist and brutal. Luckily I’ve found a copy of The Snowflake Version . . .

Chapter One 1. And it came to pass in those days that there went out a decree from a white male imperialist based in Rome, who endorsed colonialism and slavery so cannot be named in publicly funded literature and really shouldn’t have a month named after him any more (#AugustusMustFall), that all the world should be taxed.

2. And this taxing was celebrated because we love our National Health Service so much it makes us want to cry. I will tell you some time about how amazing they were with my nan when she got dandruff, which can be very painful and embarrassing.

3. And all went to be taxed, every one into his own city. In so far as anyone can be said to have their own city. For we are all citizens of the world and anyone from anywhere should be allowed to live anywhere. In fact, I would have happily had them stay in my house — if I wasn’t already renting it out to bankers.

4. And Joseph also went up from Galilee, out of the city of Nazareth, into Judaea (a place name which in no way suggests that the Jews have lived there for thousands of years or have any right to live there now) unto the city of David — who was some king who probably had slaves — which is called Bethlehem.

5. To be taxed with M, his espoused partner of no specific sex, being great with child, no doubt from an act of unwanted sexual aggression by someone in a position of power.

6. So it was, that, while they were there, the days were accomplished that M should be delivered.

7. And she brought forth her firstborn child, which she identified as male without consulting it, due to the sexist mores of the time, and wrapped it in hi-vis clothes in accordance with safety in the workplace guidelines, and laid it in a manger; because they would not even consider staying at the inn, which was part of a chain with dubious tax practices that employed staff on zero-hours contracts.

8. But the hay in the manger set off Joseph’s allergies which was a clear case of health discrimination.

9. And there were in the same country shepherds abiding in a field, sending each other gifs of their flock by night.

10. And, lo, the angel of the Lord came upon them, and the glory of the Lord shone round about them, and they were sore afraid that it would set off their PTSD or epilepsy, so they made Him turn the brightness right down and put up notices.

11. And the angel said unto them, Fear not: for behold, I bring you forms to fill in about your ethnicity and gender, which will enable us to select a representative group to go and look at the baby Jesus.

12. For unto you is born this day in the city of David an almost certainly real historical figure with some things to say that are in no way intended to undermine other religious practices.

13. And this shall be a sign unto you; ye shall find a babe wrapped in high-vis clothes lying in a manger from which the hay has been removed and replaced with a hypo-allergenic filler made from shredded mineral water bottles because single-use plastics are harmful to the turtles and baby whales.

14. And suddenly there was with the angel a multitude of heavenly host praising one of the many gods who are worshipped around the world and not placing him morally above any of the others and saying . . .

15. Glory to our particular understanding of a sort of universal ordering force, and on earth peace and goodwill to women. But not to men. Not this year. It just wouldn’t be fitting in the circumstances.

1. Now when Jesus was born in Bethlehem of Judaea in the days of Herod the king — who later did a terrible thing to all the children under two, which may give you nightmares, so please consult your local union representative if you want to skip this module — behold, there came wise people from the east to Jerusalem, who could easily have been women, or something in between.

2. Saying, where is he that is born King of the Jews — which is not an imperialist post and does not involve slave ownership — for we have seen his star in the east and left our safe space to come to see him.

3. When Herod had heard these things he was troubled. So he took some time off work.

4. And when he had gathered all the chief priests and scribes of the people together he demanded to know whether Christ could be no-platformed.

5. And they said perhaps, as he might be planning to say some things which would make trans people feel uncomfortable.

6. Then Herod, when he had privily called the wise men, inquired of them what time the star appeared.

7. And they said they hadn’t looked directly at the star as they thought that might be dangerous. But they had looked at some gifs of it.

8. When they had heard the king, they departed: and, lo, their phones went before them until they brought them to where the young child was.

9. And when they were come into the house, they saw the child with Mary his mother, and didn’t make a fuss, because some people are not lucky enough to have children and should not be made to feel excluded.

10. And they presented unto him cards explaining that gifts of gold, frankincense and myrrh had been sent to starving children abroad, who were less fortunate than him, with his famous father and comfy stable.

11. And being warned of God in a dream that they should not return to Herod, they departed into their own country another way. After first reminding Jesus to check his privilege