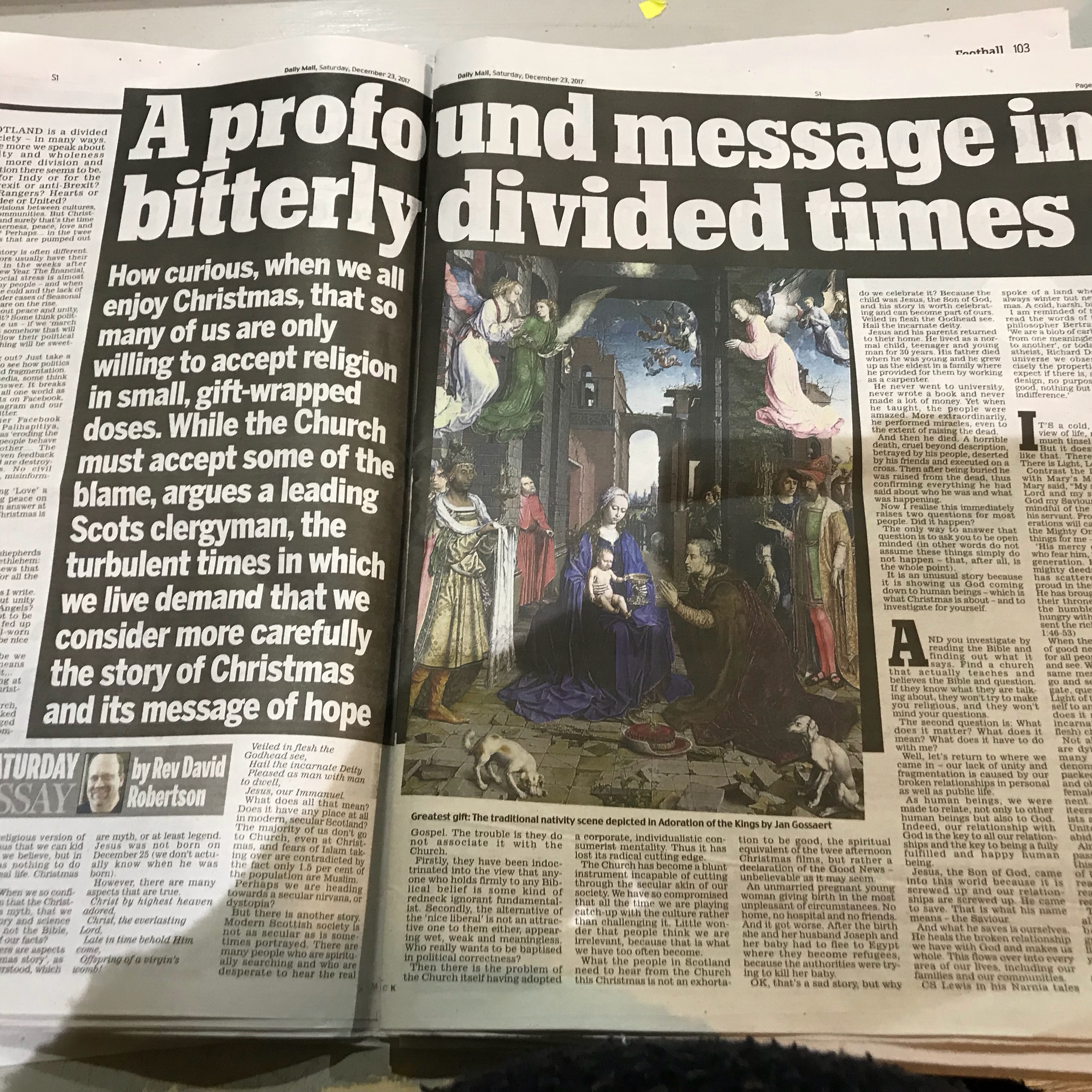 This was published as the Saturday essay in todays Scottish Daily Mail.  It is wonderful to be able to testify in such a public secular forum to the good news of Jesus Christ…May the Lord use it for his glory.   The text is below.

Scotland is a divided society – in many ways. The more we speak about unity and wholeness the more division and fragmentation there seems to be. Are you for Indy or for the Union? Brexit or anti-Brexit? Celtic or Rangers? Hearts or Hibs? Dundee or United?

There are divisions between cultures, classes and communities. But Christmas is coming and surely that’s the time of unity, togetherness, peace, love and understanding? Perhaps….in the twee Christmas films that are pumped out every afternoon. In reality the story is often different. Family counsellors usually have their busiest period in the weeks after Christmas and New Year. The financial, emotional and social stress is almost too much for many people – and when you add to that the cold and the lack of light, its little wonder that cases of SAD (Seasonal Affected Disorder) are on the rise.

Everyone talks about peace and unity. But what can bring it? Some think that political action will unite us – they feel that if we ‘march against hatred’ that somehow that will bring love; if we follow their political solution then everything will be sweetness and light. How’s that working? Just take a look at social media to see how politics is bringing division and fragmentation.

Speaking of social media some think that the Internet is the answer. It breaks down barriers. We are all one world as we post pictures of cats on Facebook, family photos on Instagram and our words of wisdom on Twitter. This month a former Facebook executive, Chamath Palihapitiya, claimed that Facebook was ‘eroding the core foundations of how people behave by and between each other…. The short-term, dopamine-driven feedback loops that we have created are destroying how society works. No civil discourse, no cooperation, misinformation, mistruth.” It turns out that tweeting ‘Love’ a million times will not bring peace on earth. So perhaps the Internet isn’t the answer!

Perhaps there isn’t an answer at all?

Except the message of Christmas is somewhat different. The angels told the shepherds in the hills above Bethlehem ‘I bring you good news that will cause great joy for all the people” (Luke 1:10). ‘Religion? You are talking about unity and you bring up religion?’! I can hear the reaction even as I write. ‘Angels? Jesus? The Bible? You have got to be joking! As for Christmas, I’m fed up hearing clergy coming on the media telling us well worn truisms about how we are all to be nice to each other.’

Well, stick with me. It is Christmas and maybe we should find out what it really means before we are so quick to dismiss its real meaning?

The elderly gentleman was sitting at one of those seemingly endless Christmas parties in our church hall. He told me that he went to church, and was even an elder but when asked how his church was going, shrugged and gave an answer that is all too common in today’s Scotland…. ‘Well, to be honest, not very well – most people are not interested in church nowadays. I mean most people know that the Bible is just myth – so why bother?’ The above is typical of a certain type of attitude that many people have towards the Bible and Church.

At this time of year most of us like the idea of Christmas – the presents, lights, holidays, food and festive fun. We are even prepared to accept that it does have something to do with that dread thing, ‘religion’. We like the carols and more people are prepared to go to church at Christmas than at any other time. But we like our Christmas religion in small doses – soft, cuddly and not too challenging. A kind of religious version of Santa Claus – that we can kid ourselves we believe, but in reality has nothing to do with our real life. Christmas is myth. But is it? When we so confidently affirm that the Christmas story is myth – that we believe history and science as facts but not the Bible, are we sure of our facts?

Of course there are aspects of the ‘Christmas story’, as popularly understood, which are myth – or at least legend. Jesus was not born on December the 25th (we don’t actually know when he was born). However there are many aspects that are true.

Christ by highest heaven adored, Christ, the everlasting Lord, Late in time behold Him come, Offspring of a virgin’s womb! Veiled in flesh the Godhead see, Hail the incarnate Deity. Pleased as man with man to dwell, Jesus, our Immanuel.

What does all that mean? Does it have any place at all in modern secular Scotland? The majority of us don’t go to Church – even at Christmas, and fears of Islam taking over are somewhat contradicted by the fact that only 1.5% of the population are Muslim. Perhaps we are heading towards a secular nirvana or dystopia? But there is another story.

Modern Scottish society is not as secular as is sometimes portrayed.

There are many people who are spiritually searching and who are desperate to hear the real Gospel. The trouble is that they just do not associate it with the Church. Firstly they have been indoctrinated into the view that anyone who holds firmly to any biblical belief is some kind of red neck ignorant fundamentalist. Secondly the alternative of the ‘nice liberal’ is not an attractive one to them either – appearing wet, weak and meaningless – who really wants baptised political correctness? And then there is the problem of the Church itself having adopted a corporate, individualistic consumerist mentality. Thus it has lost its radical cutting edge.

The Church has become a blunt instrument incapable of cutting through the secular skin of our society. We have so compromised that all the time we are playing catch up with the culture rather than challenging it. Its little wonder that people think we are irrelevant, because in reality that is what we have too often become. What the people in Scotland need to hear from the Church this Christmas is not an exhortation to be good, the spiritual equivalent of the twee afternoon Christmas films, but rather a declaration of the Good News. Unbelievable as it may seem.

An unmarried pregnant young woman giving birth in the most unpleasant of circumstances. No home, no hospital and no friends. And it got worse. After the birth she and her then husband Joseph and her baby had to flee to Egypt where they become refugees, because the authorities were trying to kill her baby. OK – that’s a sad story but why do we celebrate it?

Because the child was Jesus, the Son of God, and his story is worth celebrating – and his story is and can become part of ours. Veiled in flesh the Godhead see. Hail the incarnate deity. Jesus and his parents returned to their home. He lived as a normal child/teenager and young man for 30 years. His father died when he was young and he grew up as the eldest in a family where he provided for them by working as a carpenter. He never went to University, never wrote a book and never made a lot of money. And yet when he taught, the people were amazed. More extraordinarily he performed miracles, even to the extent of raising the dead. And then he died. A horrible death – cruel beyond description – betrayed by his people, deserted by his friends and executed on a cross. And then after being buried he was raised from the dead, thus confirming everything he had said about who he was and what was happening.

Seek and you shall find!

Now I realise that this immediately raises two questions for most people. Firstly did it happen? The only way to answer that question is to ask you to be open minded (in other words do not assume that these things just do not happen – that after all is the whole point – it is unusual because it is showing us God coming down to human beings which is after all the whole point of Christmas) and to investigate for yourself. And you investigate by reading the Bible and finding out what it says. Find a church that actually teaches and believes the Bible and question. If they know what they are talking about, they won’t try to make you religious, and they won’t mind your questions.

That is what his name means – the Saviour. And what he saves is ourselves. He heals the broken relationship we have with God and makes us whole. This flows over into every area of our lifes including our families and our communities. CS Lewis in his Narnia tales spoke of a land where it was always winter but never Christmas. A cold, harsh, bitter place. I am reminded of this when I read the words of the atheist philosopher Bertrand Russell – “we are a blob of carbon, floating from one meaningless existence to another”, or today’s celebrity atheist, Richard Dawkins – “The universe we observe has precisely the properties we should expect if there is, at bottom, no design, no purpose, no evil, no good, nothing but blind, pitiless indifference.” It’s a cold, harsh, bitter view of life – no matter how much tinsel you put on it. But it doesn’t have to be like that. There is Christmas.

There is Light, Love and Life. Contrast the Dawkin’s words with Mary’s Magnificate. ” And Mary said:

“My soul glorifies the Lord and my spirit rejoices in God my Saviour, for he has been mindful of the humble state of his servant. From now on all generations will call me blessed, for the Mighty One has done great things for me— holy is his name. His mercy extends to those who fear him, from generation to generation. He has performed mighty deeds with his arm; he has scattered those who are proud in their inmost thoughts. He has brought down rulers from their thrones but has lifted up the humble. He has filled the hungry with good things but has sent the rich away empty.” (Luke 1:46-53)

When the shepherds were told there is good news that will bring great joy for all the people – they decided to go and see. When you and I hear the same message we also need to go and see. We need to investigate, question, seek and ask the Light of the World to reveal himself to and in us. What difference does it make? Everything.

The incarnation (God come in the flesh) changes everything. Not all churches in Scotland are dying. This Sunday I , like many others from different denominations, will look out at a packed church, filled with young and old, rich and poor, male and female, people from every continent. In it you will find Brexiteers and Remainers, Nationalists and Unionists, Dundee and United fans (and those who can’t abide football!). Almost every shade of opinion passionately held, but united in this one thing – we are children of the Living God. This is the real unity in diversity. Here is real equality. Here is where love really does trump hate. That’s why it’s good news for all the people. That’s why, to borrow from Live Aid – ‘the greatest gift you’ll get this year is life’. The life of Christ. Seek and you shall find.

(Please note that the above is the unedited text I submitted…what was actually published was a little different – but not much – they had the substance of everything I wanted to say).