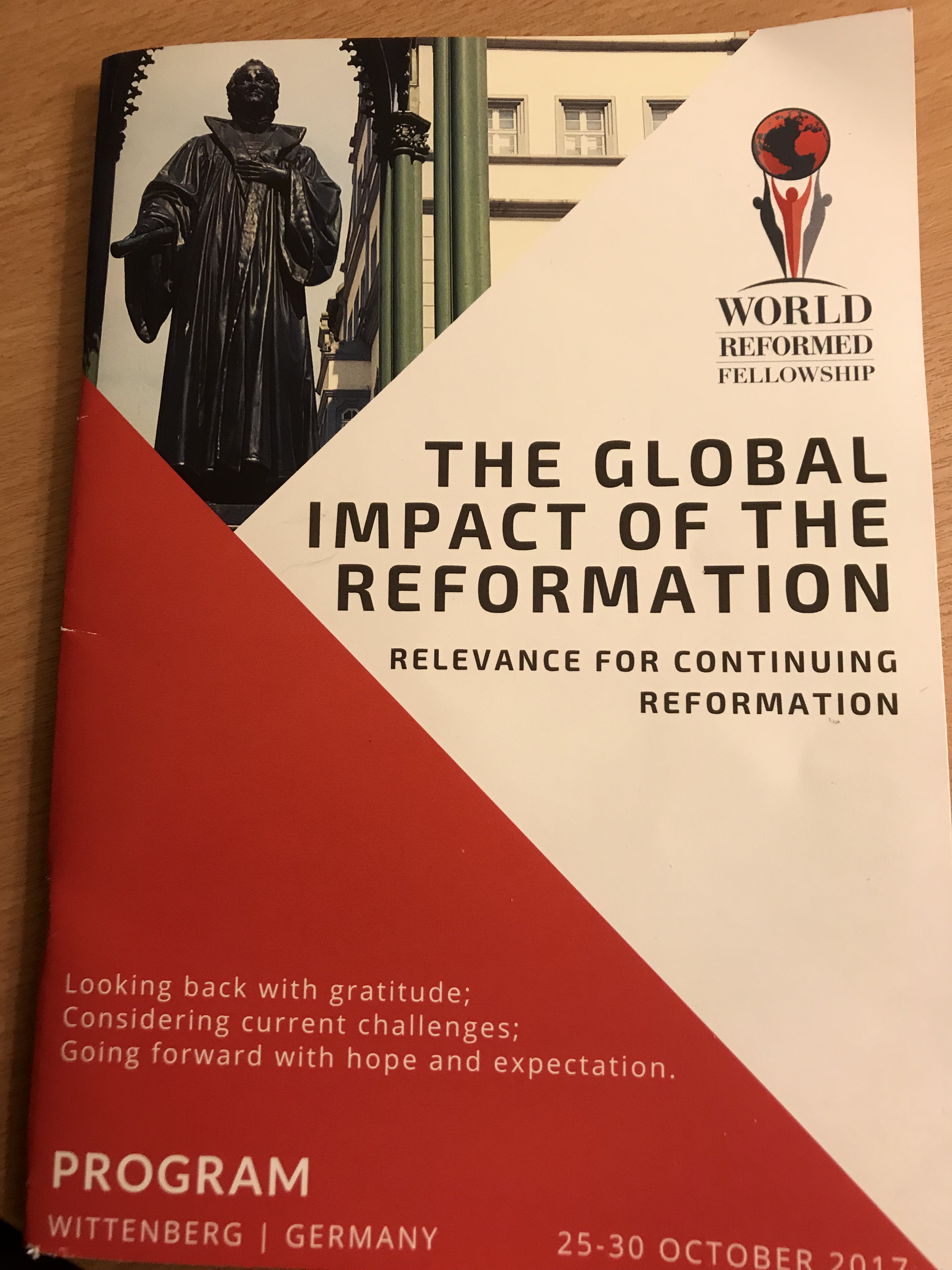 I am currently with Annabel in Wittenberg at a conference organised by the World Reformed Fellowship entitled ” The Gospel Impact of the Reformation”  – Relevance for Continuing Reformation.    I have been taking notes and thought it might be profitable to share some of the experience and teaching.

We arrived too late to hear Dr Billy Kristanto (Indonesia), Dr Rob Norris (USA) and Dr Michael Horton (USA).   However we did manage to meet with Don Carson and Bishop Michael Nazir-Ali and then heard the evening talk from Dr Herman Selderhuis (the Netherlands).

It was primarily about the heart of the matter.  Apparently you can get Luther socks, Luther sweets and even Luther pasta in Germany just now.   But this is not what Luther was about.   His primary goal  was not a Reformation of society or even the church it was to recover the message of the Gospel.   One Lutheran leader in Germany recently stated that Luther’s message was we are free to believe whatever we want!

The main issue is does man have anything to contribute to salvation?..no none at all. He tells Erasmus that popery, purgatory and indulgences are trivial issues which are not real issues at all compared with this.

The issue of guilt is still a major issue in the culture – politics and literature. Does the church address this issue?

The real threat to this present world is not global warming, terrorism, strange politicians – the real threat is me because I have twisted my relationship with God, with men and with creation…

2) What is the Situation? Is Christianity post or is it present?

I’m not sure I understood what was being said here and would have liked time to question and unpack it…but that was not to be.

Selderhuis argued that we were in a similar situation to the 16th Century in which the church had moved away from its source and message.  More interestingly he argued that we are not in a post-Christian society but a secular one.  We are still religious just not Christian.  There are two religions in Europe today Christianity and Islam (I think he was missing out on atheism and secularism).

He then had some interesting and helpful cultural analysis on sin, death and guilt in our context.

He argued that many of the most important problems today can be traced back to religious beliefs and positions.

I wasn’t sure about a couple of things – firstly did Luther develop a new view?  (was it not just a recovery of an old one?) and secondly did Luther free man from the fear of God?  Did Luther inspire Angela Merkel?

A couple of other random thoughts…

Don Carson is one of the wisest, most stimulating and encouraging people I have ever met.

I love the international aspect of the Church – every continent is represented here and, unlike most conferences I have been too – it is not totally dominated by Westerners.

Germany is spoilt by graffiti but it has great food and drink!  I loved this outside the Wittneberg station….a coffee bike!  What a great way to make a living!  A whole lot better than selling indulgences!

And it was a thrill to be sitting in a hotel in Wittenberg drinking Luther Reformatisch Bier tonight!  After all did Luther himself not say that all he did at the Reformation was preach the Word and drink Wittenberg beer?!