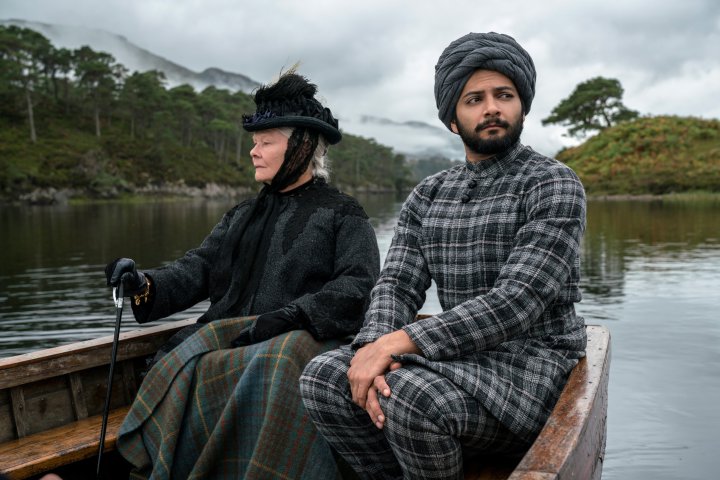 Victoria and Abdul is at one level a harmless, nice, Dame Judi Dench historical romance.   In fact it was with that in mind that I went with Mrs R on our usual Friday night jaunt to the DCA to watch it.

If I was writing this as a mere film review then I honestly couldn’t say much.  I wasn’t as impressed as I had expected to be.    Dame Judi Dench was wonderful and the filming and costumes are superb.  But overall it was pretty boring,  trite and shallow and about as historically accurate as Braveheart!  A two star film at maximum.  Most reviewers I read seem to agree.

But as a moderate dud it would not have left me so disturbed.  What bothered me were a couple of things – the history and the current day indoctrination.

Firstly lets deal with the history.   There is no doubt that Queen Victoria had a friendship with an Indian servant called Abdul Karim.

But whether it was as portrayed in the film is highly doubtful.  Ever since the debacle of the ‘discovery’ of Hitler’s diaries and their publication in The Times I have been wary of long lost ‘diaries’ suddenly being discovered.  But even supposing the diaries are genuine and they do indicate the depth of the friendship – there is much in the film that is demonstrably false.  For example the death bed scene at the end is entire fiction – we know who was at her death bed.  I recently finished reading AN Wilsons superb ‘Victoria’ and it mentions nothing of this and very little of Abdul Karim.  Wilson is usually a reliable historian.   Its quite amusing that the filmmakers pre-empt this criticism by saying the tale is ‘mostly true’.

If you really wanted to look at the history then consider the possibility that Karim really influenced Queen Victoria and hence her government over Islam and Hinduism – and perhaps sowed seeds that ended up in the partition of India on religious grounds.  Or that he was portrayed by some as a lazy carpetbagger.   Or that he had two wives.

Or that his brother in law was found to have sold one of Victoria’s brooches.  Or that King Edward allowed him to be the last to look at her body lying in state before the coffin was closed and let him be part of the funeral procession.  Maybe he was racially abused (it would be surprising in Victorian England with the increasing social Darwinianism if that were not the case), maybe he was just a friend and didn’t exploit that.  But the truth is likely to be far more complicated than the simplistic black and white portrayal in the film.

One historical fact which is much more disturbing was brought to mind by the Queensgrandson being at her side.  He was Kaiser Wilhelm of Germany.  Within just over a decade of her death the British and German nations (both governed by Victoria’s

descendants) would be at war with one another – a war in which millions of their young men would be slaughtered.  The politics of royalty in 19th Century Europe, especially that of Victoria’s descendants, who ruled in countries varying from Greece and Denmark, Spain, Norway, Rumania,  to Russia, Germany and the UK is something to be ashamed of.

But even allowing for the simplistic Holywood/Bollywood style of historical film-making (there are the good guys and the bad guys and nothing in between) there was something much more disturbing for me.  The irony is that by even saying it I will be accused of what they are trying to prevent – the new sin of the liberal elites – Islamaphobia.

Whilst the portrayal of Victorian Christianity was there with the usual caricatures – from the dour Scots Calvinist doctor, to the hypocritical pompous Anglicans, what struck me was the totally free pass given to Islam.  Abdul Karim is wise and gentle and this is portrayed as a product of Islam.  The Koran is quoted approvingly.  Queen Victoria may have been a Christian (something one would have thought quite necessary for the ‘head’ of the Church of England) or a pantheist, but this film portrays her as someone deeply influenced by the Koran – even having a death bed quote from it recited to her.  Even the appearance of Karim’s wife and mother-in-law in full burkhas is portrayed sympathetically.  The impression one is left with is that of an Islam which is misunderstood and harmless. – if not positively beneficial.    It is the Islam that our politicians want to believe in.  It is the version of Islam that our cultural elites so desperately want to be true.  It is the fantasy view of Islam which, even as I write, I am aware will have the Left screaming ‘Right wing Islamaphobe’!    There can be no questioning the groupthink…there must only be positive portrayals in the media.

I am not saying that this was the purpose of the film, but it is a part of it which is indicative of our culture – showing the direction we are going. The thinking is that in order to combat Islamaphobia  we need to have positive portrayals of Muslims in the media; just as we combated homophobia.  Although how you put these two together is a conundrum that no-one has yet been able to answer – one thing is certain there is no possibility that the Time for Inclusive Education people will be enforcing their agenda on Muslim schools!

Please don’t get me wrong.  I don’t want negative portrayals of Muslims in the media either.  Neither demonisation or glorification.   Is it not possible to have truthful ones?  In other words human beings with all their mixed up emotions, personalities, politics and religions.  My objection is to the subtle and not so subtle attempts by our elites to avoid the hard questions and portray what they wish to be true, as true.

I see this in so many other ways.   We are constantly told that there is no threat from

Islam in the UK, and that to suggest there is, is just Islamaphobia.  Were you aware that this past summer, at a meeting of a full council meeting in Oldham, Islamic prayers were led by an Imam. The Quran section read out spoke of ‘those who have gone astray, and those who have earned Allah’s anger’ .  This is traditionally understood as Jews and Christians.  This happened in a UK city.   And, as far as I can see, not a word from The Guardian, the BBC or any of the usual media outlets.  I don’t read The Daily Mail so can’t comment about them!

When a survey in Dundee schools found that the majority of pupils associated Islam with terrorism, a programme was begun to ‘re-educate’ the children and give them a positive view of Islam.  This is not just in Dundee.   I am aware of those who are in teacher training in the UK who are the receiving end of an education programme (ie. they are being indoctrinated to indoctrinate) which helps them to portray Islam in a

positive light.  In one instance students (I presume female) were asked to wear Islamic headdress – take photos and get a prize for the best looking.  If a student were to complain about doing this (apart from the fact that it is patronising nonsense) then such is the intolerant atmosphere in our universities today – they would have their card marked and be in danger of being thrown out.    No – if you want to be anti-religious in the UK today make sure you are anti-Christian and you will be fine!

A couple of weeks ago I wrote this in reviewing  Doug Murray’s The Strange Death of Europe.

“In a free society Douglas Murray and others should be free to criticize Islam, Christianity or any religion, without being subject to abuse, banning and threats of litigation. Freedom of religion is the foundation for freedom of speech and thought. When European governments and elites deny their Christian heritage and forget their past we end up with a society where critiquing the Koran will be seen as equivalent to supporting the KKK. Secular Liberalism cannot help itself. It so believes itself to be ‘god’ that anyone who goes against its doctrines will be banned – in this respect questioning Islam is on a par with questioning Same Sex Marriage which itself is seen as being on a par with racism, genocide etc. The white Middle-Class guilt complex leads us down some very strange paths! One of which is that there will shortly come a time when my even writing an article like this could be considered a ‘hate crime’.”

In Victoria and Abdul I saw a small indication of this coming indoctrination.

(For more information I would suggest that you get this copy of the Solas magazine…order from http://www.solasmagazine.com/