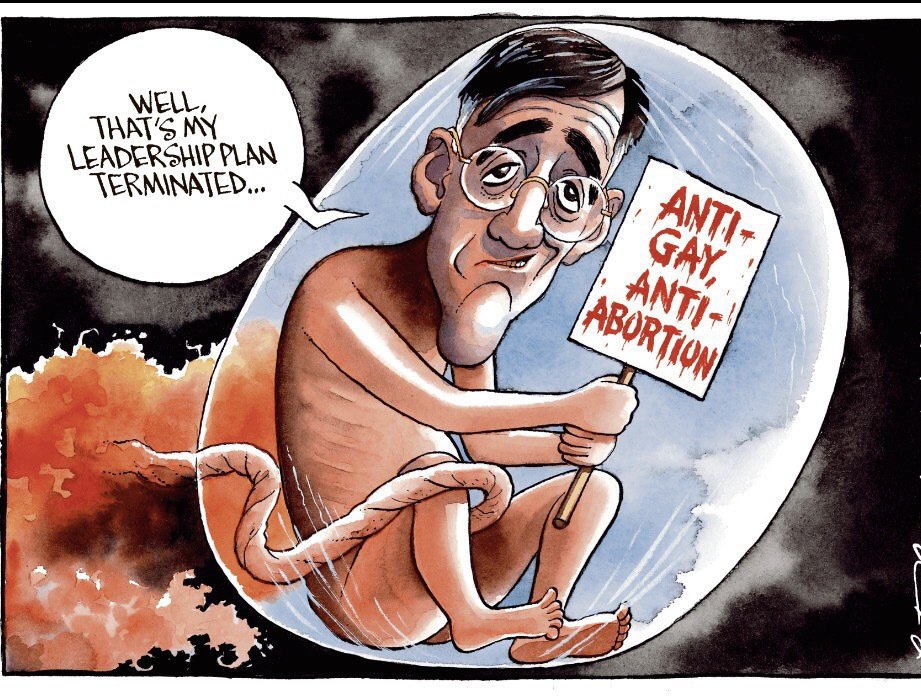 I am not a natural Tory voter.  In my younger political years it was a truism amongst those of us who were involved in student politics that ‘the Tories’ were the enemy.  Of course that is a juvenile and immature form of politics which requires a group to hate and someone to blame.  Most of us mature out of it.  Now that I’m all growed up I have discovered that the Tories are not the enemy and that there are good and fine Tory politicians ( as well as bad and rubbish ones – like in all parties!).    I still have a reluctance to vote for them, but people like Murdo Fraser and Adam Tomkins in Scotland tempt me! As does Daniel Hannan in England.   But there is one man who, if he were standing in my constituency would get my vote immediately – and if he were the leader of the Tory party I would be inclined to vote for them anyway.  Jacob Rees- Mogg is considered a bit of a joke and is regularly sneered at by the Twitterati.   But he is not a buffoon, a toff or a joke.  He is a serious politician – intelligent, measured and sensible.

As a result of these qualities he is beginning to be taken seriously and as a result of that the media are trying to do a ‘Farron’ on him.  Why?  Because he is a committed Christian who is not ashamed of his faith and he is able to graciously articulate what he believes. Watch this pathetic attempt by Piers Morgan to try to trip him up.

The clash between Morgan and Rees-Mogg is a great example of the clash in our culture, between the dumbed down, emotive, self-important guardians of the culture like Morgan, and those who take a more rational, intelligent and humble approach.  When Morgan says ‘I am a Catholic, but I’m for SSM’, he seems to think that is something he should be praised for, when in reality it shows how feeble and ignorant his Catholicism is.   To say he is a Catholic and yet reject the teaching of the Catholic church is for him to say that he is a Catholic when it suits him and not otherwise.  His ‘pick’n’mix’ approach to theology, morality and philosophy is in stark contrast to Rees-Mogg who holds the line and refuses to be bullied into giving up opinions and views which polite society tells him are ridiculous.

Of course the liberal establishment have gone crazy on mainstream and social media. Some pontificate that this will destroy his career, others want it to destroy his career. Take for example this article  from the misnamed  Independent which calls his views ‘incendiary’.  Note the bigoted and ugly comments afterwards.   The Telegraph had, as might be expected, a more balanced approach, but in general the BBC and others will just join in the mockery.

Take this disgusting cartoon from The Times – (in my view by far the most anti-Christian newspaper in the UK).

I loved this reply (which they have yet to publish) from Gavin Ashenden.

There is one thing that really surprises me.   Jacob Rees-Mogg is being mocked and ridiculed for holding to the teaching of his church, the Catholic church.  Are those who abuse him prepared to be consistent and mock and abuse the Catholic church?  If not, why not?  If his beliefs are so ridiculous as to deserve scorn, given that they are just the beliefs of the Catholic Church why not treat them the same way?  Its inconsistent, illogical and cowardly not to do so.  ( By the way, before I get all the letters let me point out that I don’t agree with Rees-Mogg on at least part of this interview – I don’t think marriage is a sacrament – but he does and guess what – in the grown up world of Christianity we can handle people not agreeing with us….its the snowflake world of liberal progressives who can’t cope with disagreement!)

However I think because Rees-Mogg refused to be bullied and because he was able to calmly and intelligently hold his position, this interview will not do him any harm at all.  In fact I think it will enhance his popularity.    Perhaps other Christian politicians should take note and learn that it is better to hold the line and give a calm, dignified and faithful response to the hectoring that our illiberal liberal media use?    Far too many Catholic politicians take the Morgan easy way out.  And far too many Evangelicals seem to lack the courage or wisdom to stand up and be counted.

God bless Rees-Mogg and may we see many more politicians like him.

For your edification have a look at these  short videos – the first is Rees-Mogg campaigning for the Union in Dundee and Arbroath!

The second is this brilliant speech at the Cambridge Union –

The third is from his younger days – his handling of the most tricky interview of all – a mocking, sneering comedian…