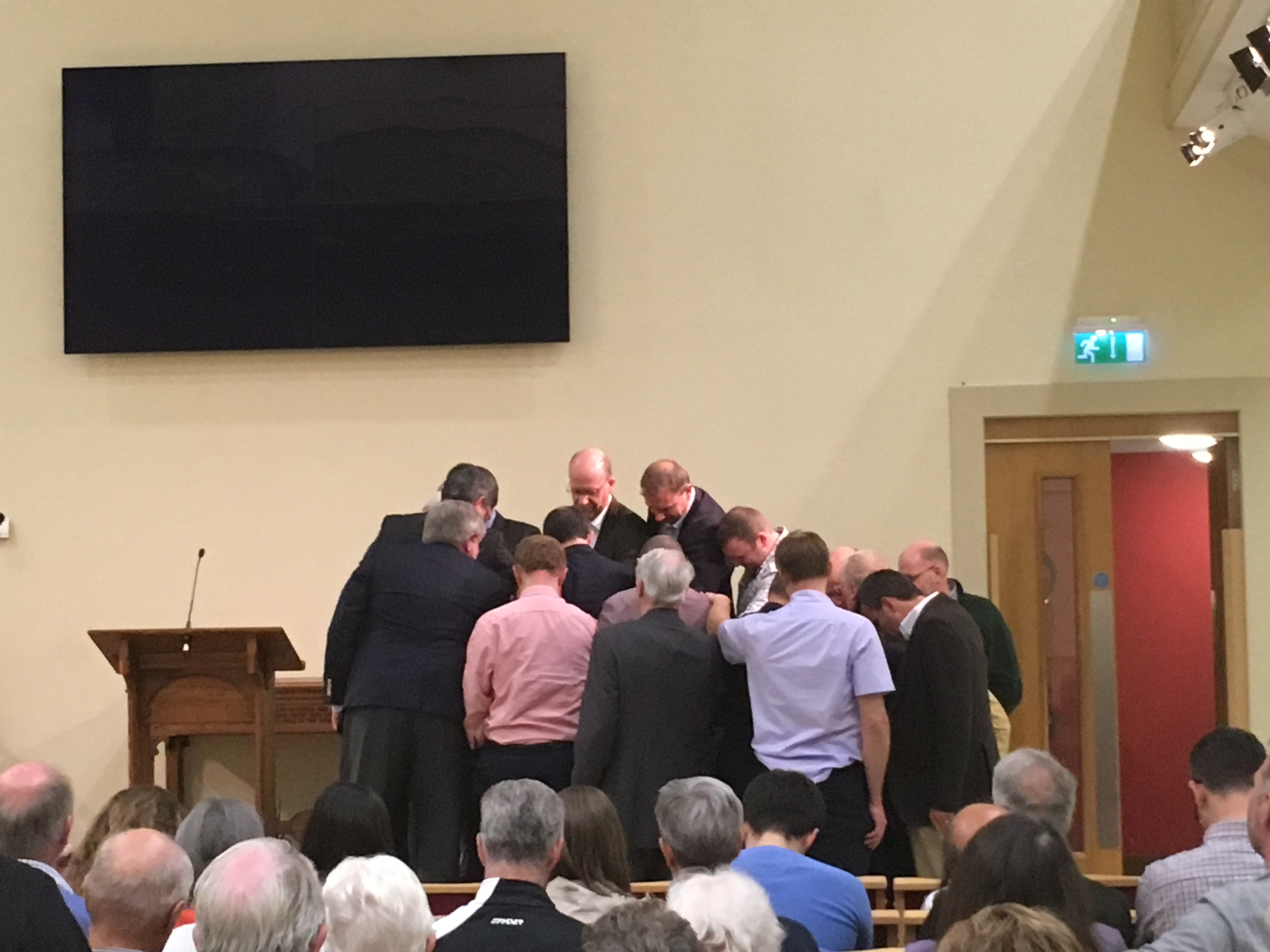 Last night was a night where two dreams came true.  It was an extraordinary occasion.  The Free Church Presbytery of Edinburgh and Perth gathered with a couple of hundred people in St Peters  to ordain and induct Andrew Robertson, to the role of church planting minister in Charleston, Dundee.

When we came to Dundee in 1992 to the dying tiny congregation of St Peters who worshipped in the building in which Robert Murray McCheyne was the first minister, I had a dream of a congregation which grew so that it would be able to plant other churches.   I had an especial burden for the housing schemes around the Kingsway – what one policeman called ‘the reservations’.  It was an impossible dream.  We were a handful of people in a decaying building.   The question was more ‘Could we survive?’rather than ‘Can we plant churches?’    Our God is the the God of the impossible.  Last night the dream came true.  St Peters is now a congregation of around 300 people. We have seen a church planted in St Andrews.  Now we are starting a new church in the housing scheme of Charleston.  I hope the first of many such.

As if that were not enough to be thankful for – there was another dream fulfilled last night – because the young man who was ordained as church planter is my own son.  When we came to Dundee he was five years old.  At our first evening service – attended by 15 people in a building that could seat 900,  this wee boy turned to his mother and said in his Sutherland accent “there’s no people!  Where’s all the people?”.    I cannot describe how stunning it was to sit in that same renewed building, packed people, as 25 years later that boy was ordained to plant a church in a housing scheme in Dundee.

As I sat there I remembered his cartoons that he drew after his wise mother encouraged him to take notes during the sermon.

I thought of his teenage years as a ‘metalhead’;  of how John Cooper (one of our students

now one of our elders) mentored and encouraged my son; of how Robin Sydserff from Chalmers church recognised his potential and wrote him a letter asking him to come and learn to be a minister with him; of how when he preached his first sermon in St Peters he noticed a friend coming in and during the sermon referred to ‘my hero, Jonathan Edwards…one of my two heroes…the other is Dime Bag Daryl of Pantera!”  and I knew then that he had the two things necessary to be a good preacher – biblical content and connection with the people.

There were so many memories swirling round in my head as I listened to David Court preach God’s word, Sinclair Ferguson exhort Andrew to love, and the Presbytery lay hands on him to ordain him.  And so many emotions.  Pride?  Yes – and I hope in the right way.  Joy?  Absolutely.  Hope? Certainly – we dream on.  Apprehension?  Indeed – the work is hard and my son is going into a battle where he will have to die many deaths in order to see resurrection in the lives of the people.   But perhaps most of all I felt thankfulness.  Thankful for all that God has done in our families lifes.  Thankful for Caireen, Andrews helpmeet and partner – a Godly young woman who shares his heart, vision and desire to minister in Charleston.  And thankful that I have lived to see this day.

In 2011 when I was in a coma Andrew wrote this extraordinary FB post:

An update on Dad: There hasn’t been much said in the past few days because things haven’t been going well. His sedation was increased on Sunday and they’ve had him asleep since then. The damage to his lungs is still sever and today mum was told by the doctors that it’s 50/50 weather he’ll live or die. I write this with great anguish and a heavy heart but not without hope. There is still a hope that he’ll make it through this, but there is a better hope he has and we have. A hope that does not waver and is 100% certain. That is the hope of eternal salvation through Jesus Christ. Jesus has already removed Dad’s biggest problem, it’s not the deterioration of his lungs but something more deadly… his sin. Christ has saved him from that. Tomorrow I go down with Becky to Dundee, knowing that this may be the last time I see my Dad… till Christ returns and “everything sad is made untrue.” 1 Thessalonians 4:13-14

Five years later I was able to be at a service where we ‘laid hands’ on the young man who wrote this statement of great faith in a great God.  We were ‘as men that dreamed’.

The night itself was phenomenal.  As the aforementioned John Cooper wrote: “What a great evening. I’d go as far as to one of my favourite times spent in St Petes! Emotional, encouraging, purposeful, proud and a real sense of God’s presence tonight. Exciting times!”

David Court from Edinburgh preached a good sermon from John 4.  Sinclair exhorted Andrew in terms of 1 Timothy 1:5 “The goal of this command is love, which comes from a

pure heart and a good conscience and a sincere faith” .  He pointed out the difference between those who love to preach, who love to be a minister, and those who love the people.    The praise was beautiful – none more so than when we sang Psalm 126 and Ps 62 and the great Free Church minister, Horatius Bonar’s hymn, I heard the voice of Jesus say.  The laying on of hands was ‘charismatic’ in the best sense – and it was good to have different ministers, including John McClean, from the Presbyterian Church in Australia, join in.

Then the two speeches afterwards were really a continuation of the worship.  Robin Sydserff gave a warm, passionate and what some might consider ‘controversial’ address –

I thought it was prophetic and spot on.  It was such an encouragement to see 60 people come from Chalmers church to share in this occasion.  What a job they have done (along with UCCF, Cornhill and ETS) in training this young man for ministry.   Chris Davidson, another young man who the Lord has called to ministry, also spoke with passion, warmth and Christ-centredness.    Indeed that is how I would describe the whole evening.

“I have spoken to you with great frankness; I take great pride in you.  I am greatly encouraged; in all our troubles my joy knows no bounds” (2 Corinthians 7:4)

We have many troubles.  We are faced with many difficulties – including our own faults and sinfulness.   But even in those we can be like Paul and know a joy that knows no bounds.  We can be like the Psalmist and have our mouths filled with laughter and our tongues with new songs!

And now on to part two of our ordination weekend – tomorrow in St Peters we will ordain four new elders and two new deacons.  Soli Deo Gloria!